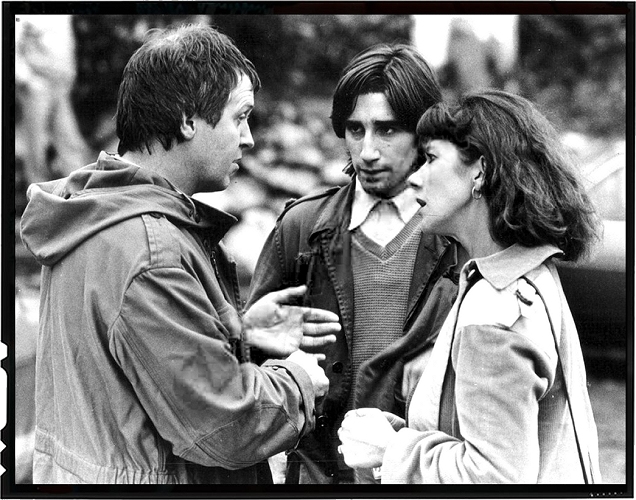 Helen Mirren at the Society of West End Theatre Olivier Awards Reception, receiving the Best Actress award for “Antony and Cleopatra”. With director Pat O’Connor and co-star John Lynch on the set of “Cal” in Ireland. As Moll Cutpurse in the Royal Shakespeare Company’s “The Roaring Girl”.

On the heels of the successful production of “Antony and Cleopatra” for which Helen received Olivier Award and Society of West End Theatre Award nominations, she returned to the Royal Shakespeare Company for the lead role in Thomas Dekker and Thomas Middleton’s “The Roaring Girl”. The “fearless and feisty” title role is one of the few that was based on a real-life character. Written probably in 1611, “The Roaring Girl” is based on Mary Frith, also known as Moll Cutpurse, a sword-wielding, hard-drinking woman who refused to conform to society’s expectations. She flouted convention by appearing in men’s clothing, consorting with thieves, and besting men in duels and fights. In the play she is presented as a kind of female Robin Hood figure, doing good to others through her knowledge of the seamy side of London life. Reputedly the first woman to smoke tobacco, she admitted in a court statement of 1612 that she had regularly resorted to alehouses, taverns, tobacco shops and also to playhouses there to see plays and… being at a play about three quarters of a year since the Fortune in man’s appeal and in her boots and with a sword by her side, she told the company there present that she thought many of them were opinion that she was a man, but if any of them would come to her lodging they should find that she is a woman. In 1983, Helen Mirren auditioned for the female lead in the big screen adaptation of Harold Pinter’s “Betrayal” with Ben Kingsley and Jeremy Irons. She met with director David Jones and producer Sam Spiegel – an audition she was not shy to retell even before it was generally accepted to call out chauvism behavior in film. Spiegel asked her to walk down the corridor to go to lunch as he, Pinter and Jones followed. Spiegel then told them she was far too sensuous for the part and would distract from the other elements in the film. In other words, he denied her the part because he thought her butt was too big for the camera. The part went to Patricia Hodge, whose backside was not an issue for the film.

After “The Roaring Girl”ended, Helen was on her way to Ireland to play the female lead in a low-budget love story. “Cal” had a first-time director and a new young star, so its writers couldn’t believe their luck in attracting Mirren to an audition. The title character of Cal is used as a driver on a nighttime murder of a member of the Royal Ulster Constabulary. The murder takes place at the victim’s home in view of his family. The victim’s dying words are a call for his wife, Marcella, a Catholic. Cal cannot forget and, a year later, meets Marcella at the public library. Burdened with guilt over his role in the murder, he tries to leave the IRA, but is pressured to remain a member. Cal seeks work in her family’s Protestant home. Initially he works as a hand on their farm, and later moves into a small cottage on their land. Marcella is not happy in her home, feeling trapped by her deceased husband’s family. Over time, Cal and Marcella begin a love affairâwith Marcella unaware of Cal’s role in her husband’s death.

As screenwriter Bernard Maclaverty remembered the audition tapes she did, “we watched these clips and the first of them was John Lynch as the nineteen-year-old boy and Helen Mirren as the more mature woman. And they were electric together. In this little scene they had chosen, John Lynch was sitting on a sofa next to Helen Mirren, who was am eminent Shakespearan actress with a wonderful reputation, and he had to make a pass at her and kiss her. And you could just hear the nerves in his voice. It was no doubt in my mind, and in everybody elses minds, as to the casting was perfect.” He continues, “there’s a wonderful intensity and she just draws you into the role. It ceases to be a role and that’s what good acting is. That’s the person. That’s Marcella. That’s the woman who is as trapped in her own family, as the boy is trapped in the violent organization. So the two of them are trying to change their situation.” One thing that surprised Malaverty as well was Helen’s Irish accent. “She got the accent absolutely right. I remember one day when I was on the set and Helen was walking along the field, listening to a walkman. We had some chat. And I said, ‘What are you listening to?’, thinking it might be Beethoven or Bach or something like that. And she said, ‘I’m listening to Liam Neeson saying my lines.’ So Liam Neeson with his Northern Ireland accent was pitch-perfect and she had recorded them and she got them pitch-perfect.