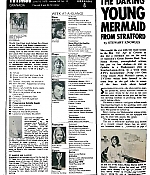 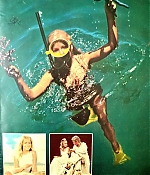 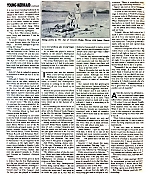 She caught the eye with her nude scenes in the film Age of Consent as she did a mermaid act on the coral of Australia’s Great Barrier Reef. Now Helen Mirren, accomplished actress, has put on her clothes – to star as Ophelia in a Shakespeare play at Stratford-upon-Avon. In a week when ATV’s documentary “Doing Her Own Thing” traces Miss Mirren’s career, a TVTimes writer finds himself in the same boat as the girl who is aware of the bare truth about herself.

Stratford-upon-Avon – the whole town’s a stage, the passers-by, mostly American tourists – is the scene. Down by the river in the most theatrical place we have set our play, and the Sunday morning sunshine is producing some very pretty lighting effects. The mood is romantic – and green willos stretch long inquring fingers to the sparkling water – and the sleek swans of Avon, a loyal and constant audience, wait quietly for curtain-up. Enter, rowing, one Shakespearean actress accompanied by two chroniclers, the one equiped with pen, the other with camera. She speaks: “It’s his sreering that’s wrong!”. The line is beautifully delivered and, because of a recently relaxed throat, has an attraction huskiness about it.

It is true we are heading backwards for the river bank and I am nominally in charge of the rudder. I suppose I could have been distracted – shapley, 24-year-old blondes who have made the sort of film where clothes are considered superflous can have that effect – but I deny the whole thing. Helen Mirren, accomplished actress, and 5ft. 4in. oarswoman, apologies. “I’m a Leo. That means a leader – noisy, bossy and dominant. I can be very bossy.”

So could Cleopatra. But alhtough she took Antony down the Nile in a barge… he never managed to get her rowing the thing! Helen Mirren who played Cleopatra with the National Youth Theatre at a “ridiciously young” 18 and last year starred with James Mason as the often-undressed teenage beachcomber in Age of Consent – is today wearing a Greek tunic-style dress in white linen with four gold bands around the mini-length hemline and size 5 1/2 white boots. And, let’s face it, nobody is going to be interested in what the rest of us are wearing…

Although I began by rowing and Helen was at the tiller, suddenly in mid-scream she asked if she could row. The change-over almost had us all in the river, but all’s well that ends well. All I now have to put up with is that slightly surperior expression girls wear when they have taken over some athletic core, and are doing it better than the man they have superseded. I should worry! The rest is doing me good and the view is delightful. As Cleopatra said to Antony – and he wasn’t rowing at the time either – “Tis sweating labour to bear such idleness so near the heart.”

Serving as a backdrop to our scene is the red-brick riverside theatre where the Royal Shakespeare Company is now in its 111th season and where the name Helen Mirren is one of the 41 alphabetically-arranged names on the posters outside. Names like Patrick Barr, Brenda Bruce, Trader Faulkner, William Russell and Sebastian Shaw. Helen, who joined the company four years ago after six months in reperotry at Manchester – “I just happened to be at auditions at the right time” – this season she plays Ophelia in Halmet, Lady Anne in Richard III and Julia in Two Gentleman of Verona. Earlier this year she played Cressida at London’s Aldwych Theatre.

Looking at this lovely girl it is hard to believe that the first Shakespearan part she ever played – as a 13-year-old Westcliff-on-Sea convent schoolgirl – was Caliban, that “savage and deformed slave” in “The Tempest”. And the first part she played at Stratford was a non-speaking ugly young beggar in Coriolanus. At 14, when she played a scene as Ophelia in the school’s Shakespeare Cup form competition, she made a discovery. Shakespeare was exciting. “In acting Shakespeare you realise how exciting it is. I find it quite uninteresting to read. It is only when I start acting that it comes alive.”