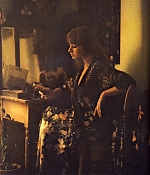 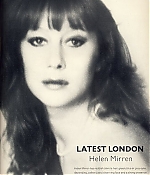 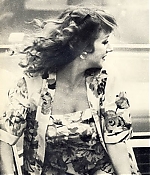 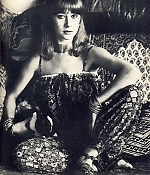 Tags
The Bed Before Yesterday, The Seagull, Vogue, Year 1976

Helen Mirren has been playing since October in Lindsay Andersonâs repertory experiment at the Lyric, as Nina in The Seagull, and asâa foolish girl out for a fast buckâ in the highly successful Ben Traversâ farce, The Bed Before Yesterday. It is a hard life, and she doesnât seem to weaken. With the adrenalin shots of at least one performance a day, she goes on to eat, to drink and to dance the night away; only retiring early when there is a good late-night movie on television. She did think a new regime was needed: âIâm about to go out and buy a book on yogaâ. Now she might do ten minutes of the Canadian PTX exercises, and eat a lot or nothing at all. Her clothes are pretty, secondhand market pieces mixed with things from shops like Che Guevara. She uses Tarn Hows Otto scent which she buys by mail order from the Lake District. What she really enjoys is make-up.

âI wear masses during the day but tend to take it off for the stage, it can look overdone so easily. I mix my own foundation because no one product is perfect, and they do seem to vanish into my skin. One is the right colour, one the right consistency, and I go on mixing them with my lovely Borghese powder till it works. Make-up can be daunting, all the big names, so I buy most in Boots, use kohl and a particular Mary Quant violet eye tint.â

She is hardly a new name; twelve years ago as a schoolgirl she received dazzling notices in the National Youth Theatre. Born in London, 28 years ago, âthe fastest birth on record at Queen Charlotteâsâ, she grew up in Leigh-on-Sea. Her family, she says, could not be described as theatrical-âthough my Auntie Olga was a showgirl, briefly, and my father is a musician; he used to play the viola but couldnât raise a family on that.â

Films have been The Age of Consent, Savage Messiah, Oh! Lucky Man, and she has appeared as Miss Julie and in A Midsummer Nightâs Dream on television. She would like to do more filmingâif she can escape the stageâbut if she belts out her Teeth ânâ Smilesâ role with as much bottle as she did at the Royal Court, the show could run well past October. âIâve never stayed in one place for a whole season, but I suppose it will be good for the garden.â The garden grows behind the green and yellow painted house she shares with a friend in Fulham. Inside are signs of builders just passed through, paisley and faded Japanese silk cushions, busy lizzies, a Christmas present piano and Rosie, her black and white rabbit, who joins her here to be photographed by Lord Snowdon.