She's Played Caligula's Wife and Fu Manchu's Girlfriend, but Helen Mirren Is Fieriest of All in the Flesh
People Magazine | November 03, 1980 | Written by Fred Hauptfuhrer 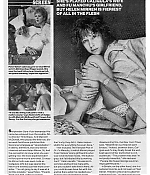 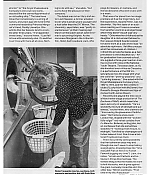 Scriptwriter Gore Vidal demanded his name be removed from the credits. Ditto director Tinto Brass. And Malcolm McDowell, who played the title role, disavowed Penthouse publisher Bob Guccione’s Caligula as “sexploitation.” It seems, therefore, that only British classical actress Helen Mirren, 35, had the perception to know what she was getting into: the most expensive ($17 million) porno movie ever shot. Or maybe Mirren (who was seen nude as Caligula’s wife but was spared the hard-core scenes) just had more character. “I’m not going to say it was all a terrible mistake,” says Helen. “People were paid well. If they’re honest, that’s why they did it. I take responsibility for everything I’ve ever done.”

That includes The Fiendish Plot of Dr. Fu Manchu, in which Mirren played Peter Sellers’ loony girlfriend in what was to be his final movie. “He looked gray, but I attributed this to working hard,” Helen recalls. “He was an insomniac and took too many pills, but you couldn’t take him in hand. All you could do was have fun with him and be there when he needed you.” Praising her performance in the disappointing film, the New York Times said, “Miss Mirren is a heaven-sent breeze.” Indeed, between them, Caligula and Fu may finally break the well-kept secret of her distinction to U.S. audiences. “The problem was that I’m not pretty-beautiful,” she reckons. “People like Susan George would always get the parts.”

In Britain, on the other hand, she is a national favorite, and not least on Fleet Street. Theater critics have called her everything from “an amorous boa constrictor” to “the Royal Shakespeare Company’s very own sex bomb, stacked like the carved figurehead of an old sailing ship.” The tabs have linked her romantically to a string of suitors, and years ago she lived in the commune headed by Princess Margaret’s friend, Roddy Llewellyn. She admits that her liaisons tend to crumble after three years. “It’s happened three times,” mourns Helen. “I just fall in love with somebody else. It’s sad that I can’t live with them all at once. Nothing to do with sex,” she adds, “but just to have the pleasure of their company.” The latest man in her life is Irish actor Liam Neeson, a former amateur boxer who is seven years younger and a foot taller than the 5’4″ Mirren. The chemistry, says Helen, was “pretty instantaneous” at their meeting last March on the Dublin set of John Boor-man’s upcoming Knights. As the sorceress Morgana in the Arthurian film, Helen had to seduce Liam, who plays Sir Gawain, on camera, and the two became offscreen lovers within a week.

That was a far piece from her stage premiere at 6 as the Virgin Mary, but the experience, reports Helen, was not dissimilar. “My first taste of an audience reacting as if I were a creature from another world or a strange flower which they daren’t touch was very heady.” Otherwise her childhood as the daughter of a civil servant (whose father was an Ã©migrÃ© Czarist colonel forced to work as a cab driver) was “an absolute nightmare. I felt like a mouse amid the viciousness of children. I retired into private fantasies as a fairy princess or a very beautiful nun.” After graduation from convent school, she juggled a three-year teacher-training course with roles at the National Youth Theatre. Two years later, at 19, she knocked over critics as Cleopatra in a performance at the Old Vic, splurging across the stage with what she calls her “pent-up passions” and “quite big bosoms.” She acted with the Royal Shakespeare Company from 1967 to 1972, and her film credits include O Lucky Man! with McDowell, Ken Russell’s Savage Messiah and Age of Consent with James Mason. Recently she played the title role in a Manchester stage production of The Duchess of Malfi, which meant she saw Liam only on weekends. “He’s a wonderful mixture of strength and quietness,” exults Helen, who claims to be “discovering the pleasures of faithfulness.” Her home is a two-room London flat, draped with the “wonderfully vulgar” red velvet curtains from Fu Manchu. Between acting jobs, Helen confesses that she sometimes watches TV “nonstop from 10 a.m. to midnight,” fortified by champagne and Indian takeout food. She drives a battered Toyota pickup truck.

There is currently some possibility that her bohemian days may end (though she can’t seem to stop talking a good game, dropping lines like “Give me Edith Piaf on heroin to Farrah Fawcett jogging any time”). Liam, she notes, “is Irish and Catholic and believes in things like marriage. The terrible thing is that he makes me want to knit his socks, which goes against the grain. I actually ironed his shirt the other day,” Mirren continues. “First time in my life. Ridiculous!”