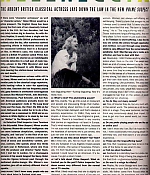 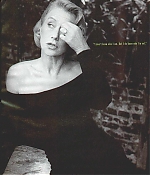 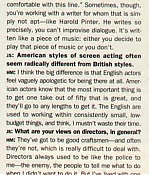 The Ardent British Classical Actress Lays Down the Law in the New Prime Suspect.

If there were âcharacter actressesâ as well as âcharacter actors,â Helen Mirren would be a prime prospect. The English thesp has been among the first rank of her classically trained peers in the U.K. for two decades, but has only lately broken big in America. As with Anthony Hopkins, it usually takes a single role for one of these versatile British professionals to suddenly seize the day, after numerous stalwart supporting efforts in Hollywood movies and the occasional luminous lead in a European art film. In Mirrenâs case, the wake-up call came in a British TV policier called Prime Suspectâin which she starred as an indefatigable homicide detective in a bull pen of male hostilityâshown in the PBS Mystery! slot last January. Prime Suspect II, with Mirren once more lasering the station-house testosterone, airs next month.

A lead Shakespearean actress while still in her teens, Mirren went on to tackle most of the meatier parts in the classical stage repertoire, while huntingâoften in vainâfor appetizing movie roles. On screen she has frequently played wild, gamy femmes in overheated extravaganzas by auteurs like Michael Powell, John Boorman, Peter Greenaway, Paul Schrader, and Ken Russell; American audiences probably know her best as the gangstersâ molls in The Long Good Friday and The Cook, the Thief, His Wife & Her Lover. Hollywood has called her in to do a Russian accent (as a cosmonaut in 2010 and an ex-ballerina in White Nights) or to stand by her man (as âMotherâ in The Mosquito Coast).

As Detective Chief Inspector Jane Tennison in the dirty-realist Prime Suspect, Mirren exudes a Sigourney Weaver-ish survival intelligence: she can move between skepticism, compassion, integrity, and âsod youâ in the flick of an eyebrow. To talk to, sheâs a similarly combustible blend of sense and sensibilityâardent, precise, contrary. She spends about two thirds of each year in Hollywood, where she lives with the producer and director Taylor Hackford. I met her in London, for a champagne powwow at top swank hangout the Savoy Hotel. Ivana-like figures tottered past through the bedizened chatter-lounge. Ms. Mirrenâs conversation gave off an entirely different kind of sparkle.

JAMES SAYNOR: I donât know many people who are crazy about being in England right now.

HELEN MIRREN: I am. I left England in 1984, and it was disgusting thenâfucking disgusting. Now itâs really nice.

MIRREN: Yes, exactly. You go into a pub or restaurant and people are discussing things that matter. Theyâre talking about politics in an educated way. Theyâve been betrayed, and thatâs always a salutary experience. In 1984, they were so stupidâit drove me out. Now England is great, fabulous. Thereâs a heartbeat in any country that carries on regardlessâat least in Europe. Thatâs what worries me about America, because Iâm not sure what that heartbeat isâunless itâs the heartbeat of someone whoâs just arrived, who just ran over the border two weeks ago.

SAYNOR: What do you miss about Britain? Tea? Rain?

MIRREN: I miss rain, yes. Not so much rain as cold. And any European in Los Angeles misses people in the streetsâthe sense of busyness. Personally, Iâm from Southend. I woke up one day and realized I could never be an American. Itâs because Iâve got a return ticket.

SAYNOR: Letâs talk about Prime Suspect. What attracted you to the part? Police Inspector Tennison seems very different from the normal run of TV sleuths.

MIRREN: What I liked most was that she is slightly unpleasant in her obsessive pursuit of her own career. You donât see that on the screen in women. Women are always self-effacing and self-denying. Thereâs a term that enrages me, and I always used to swear that Iâd never play characters described that way. The term is âlong-suffering.â As in âthe long-suffering wife ofâ¦â Those loathsome long-suffering parts. And then very often Iâd find myself in just such a role.

SAYNOR: So Tennison is short-suffering. I also like the way she solves the crimes through organization and method, not just crazy intuition, which is very different from the normal detective syndrome. And I like the way sheâs inside an institution and has to deal with that.

MIRREN: Absolutely. I didnât know anything about the police when I took the role. Iâve always seen them as a bit of a scary element in my life. I have incredible sympathy and respect for them, and at the same time theyâre a very elaborate secret societyâin the sense of a Masonic element, which is very strong, but also in the sense that theyâve got their own little world, their own jokes, their own thing going. Like journalists. The police have an extremely sick sense of humor, very guarded, very private, very male, which they need to survive on an everyday level. I donât think anyone has ever managed to tap that on the screenâit would actually be too shocking.

SAYNOR: So do they cut many corners?

MIRREN: Yes, of course they do, but very much within the secret world. The police are a bit like actors on a stage. They wear costumes, and they think very consciously about their impact. Iâd love to get into their secret world, but I know I never will.

SAYNOR: Do you prefer playing people who are like you or unlike you?

MIRREN: I donât know who I am. But I do know who Iâm not. I have occasionally tried playing people Iâm definitely not, and that wasnât a very pleasant experience.

SAYNOR: These are the long-suffering types?

MIRREN: Yes. But I suppose you have to be on that side of the fence to see what itâs like.

SAYNOR: Tell me about Southend.

MIRREN: Southend is a dormitory town for London. But it also had this thing of being the playground of the East Endâa glamorous holiday town.

SAYNOR: So was it a refuge for villainy?

MIRREN: Maybe. My uncle George went down there, and he was a major East End villain, of the old style. My father came from Russia when he was two years old. My grandfather had come over as a member of the czarist army, to make an arms deal with the British government. Being a blinkered military man, he was unaware that the Russian Revolution was about to take place. And my Russian aunt, Auntie Olga, married the East End gangster. She was a chorus girl.

SAYNOR: Do you feel Russian at all?

MIRREN: Only when Iâm in Russia. People come up and ask me for directions.

SAYNOR: In movies these days, how much space is there for actorly creativity? Or do actorsâperhaps like writersâget a bit mangled?

MIRREN: Once a film gets into production, the actors sometimes begin to have more input than a writer does. Writers can get very angry when an actor says, âI donât know, I donât feel very comfortable with this line.â Sometimes though, youâre working with a writer for whom that is simply not aptâlike Harold Pinter. He writes so precisely, you canât improvise dialogue. Itâs written like a piece of music: either you decide to play that piece of music or you donât.

MIRREN: I think the big difference is that English actors feel vaguely apologetic for being there at all. American actors know that the most important thing is to get one take out of fifty that is great, and theyâll go to any length to get it. The English are used to working within consistently small, low-budget things and think, I mustnât waste their time.

SAYNOR: What are your views on directors, in general?

MIRREN: Theyâve got to be good craftsmenâand often theyâre not, which is really difficult to deal with. Directors always used to be like the police to meâthe enemy, the people to tell me what to do when I didnât want to do it. But Iâve lived with one for a while now and I guess I can put myself more in their position. You shouldnât be too sympathetic to them.

SAYNOR: How much is acting to do with technique, and how much with intuition?

MIRREN: My great teach about acting was Francis Bacon, the painter. Thereâs this book of interviews with him and he talks about technique and accident or intuition. You have to go through this long, painful process of learning techniques to be able to recognize a âgood accidentâ or a âbad accident.â Ill-informed intuition is fantasticâitâs what great art is. So really old painters or writers or actors are brilliant, because theyâve finally reached the point when they can let go of al technique. And young actors or young writers who try to pretend that technique doesnât matter have got their heads up their arses, basically.