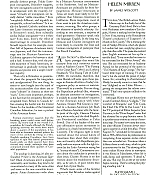 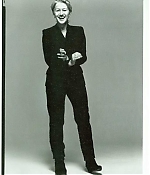 Tags
A Month in the Country (Broadway), The New Yorker, Year 1995

“I’m in love,” the British actress Helen Mirren says in the dusky bar of the Gramercy Park Hotel. She’s in love with Manhattan: now a resident of Los Angeles, Mirren is making her first long stay in New York, starring in the Roundabout Theatre’s production of Turgenev’s “A Month in the Country.” She is reprising the role of Natalya Petrovna, which she played in London last year, supplying spine in a play that often wilts. The praise she received from English reviewers set her up for a terrible thud. “I was mortified not even to be nominated for the Olivier Award,” she says. She was nominated for an Academy Award, for her portrayal of the queen in “The Madness of King George.” She harbored little hope of winning (“I always lose”), but she earned the praise of Judge Lance Ito; according to Entertainment Weekly, he recently wrote in a note that he was “delighted to see Helen Mirren…getting the recognition her talents command.” That’s one opinion unlikely to be overturned. Although Mirren won art-house fame in such Eurotrash films as “Caligula,” “The Comfort of Strangers,” and “The Cook, the Thief, His Wife & Her Lover,” it is her TV portrayal of Police Inspector Jane Tennison, in the “Prime Suspect” series, that has elevated her to pop-heroine status. It is a performance without an ounce of emotional slop. No matter how messy the crime, the ultra-efficient Tennison always manages to squeeze in a futile love affair. “Prime Suspect IV,” scheduled for broadcast this fall on PBS, differs from its predecessors in comprising three separate stories rather than one extended arc. Tennison takes a different lover in each story, which is quite a turnover even for her.