Queen of the Hippies
The Daily Mail | March 03, 2007 | Written by Victoria Moore 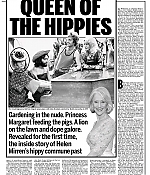 Gardening in the nude. Princess Margaret feeding the pigs.Alion on the lawn and dope galore. Revealed for the first time, the inside story of Helen Mirrenâs hippy commune past

THE man from the South West Electricity Board swung his van off the narrow Wiltshire lane into the farmyard and goggled. This was not what he had been expecting. True, it was August and the weather was hot. True, there was talk in the village that a group of young people had taken over the big, run-down house at Surrendell Farm and set up a commune. But this hadnât quite prepared him for the sight of a well-toned Roddy Llewellyn (Princess Margaretâs then boyfriend) and a group of his artistic friends running around stark naked, white bottoms bobbing up and down. Llewellyn, for his part, was unembarrassed. âWe are just having a good time in a quiet atmosphere,â he explained with a cheerful shrug. â When the weather gets colder, itâs back to clothes.â

This was in 1975 when Harold Wilson was Prime Minister, men wore their hair in the wild frizzy style popularised by footballer Kevin Keegan and Elvis Presley was top of the charts. And, three decades before Hollywood finally honoured her with an Oscar, a bewitching young blonde named Helen Mirren, who used to bomb around the countryside in a white MG was being feted as the âSex Queen of Stratfordâ. Then fiercely republican and a free spirit whom critics accused of âturning her back on stardomâ by choosing experimental theatre over a lucrative screen career, Mirren spent a lot of time at Surrendell. She went there to unwind after emotionally draining evenings playing Lady Macbeth during a run at the RSC, explaining hoity toitily to anyone who asked: âIâm living in a farmhouse with some friends who have nothing to do with the theatre. Itâs what some people might call a commune, but itâs really a sort of artistsâ colony.â

Today, Mirren prefers not to talk about that time at all, although she did once say that it was âall bongo drums and five-skin spliffsâ â by which she meant unusually large joints. Astonishingly, until now, her friends from that period have also remained silent about the lively goings-on deep in the Wiltshire countryside. Like a cross between The Good Life and a perpetual bohemian house party, with homemade scrumpy the drink of choice and handrolled cannabis the drug of choice, Surrendell was a place where you would be just as likely to come across a Princess as a tame lion. The sprawling Jacobean farmhouse, set in 57 acres, was owned by Sarah Ponsonby, an artist whose brother is now the Earl of Bessborough. It was derelict when she bought it for Â£37,500 in 1975 with two others â her then boyfriend John Rendall and interior designer Mike Tickner.

SHE INVITED all her friends to stay and ran it like a collective. In theory, the house belonged to everyone, with those who could afford to do so making large financial contributions to the renovations. In practice, they were repaid (with no interest) when they left rather than retaining a stake in the property. But everyone, including Princess Margaret when she came to stay, was expected to muck in with housework, heavier tasks such as rebuilding walls and looking after the livestock (cows, geese, chicken, pigs and horses). The head gardener was Roddy Llewellyn, who was often found stripped to the waist, swearing at the goats for eating all his strawberries, or moving his prize sow Mah-Jong from one part of the garden to another via an elaborate set-up of electric fences. Other Surrendell regulars included Mirrenâs then escort Prince George Galitzine (the son of a Russian prince); record producer Simon Heyworth who worked on Mike Oldfieldâs Tubular Bells; a brilliant tabla (Indian drums) player called Sam Gopal; Tessa Codrington, now better known as the wife of financier Stuart Wheeler and mother of the model Jacquetta; and photographer Bob Whitaker, famous for his work with The Beatles and Salvador Dali.

Heaven knows what the locals made of their exotic new neighbours, with their Terry de Havilland shoes, peasant ponchos, flares, kaftans and ludicrous hats brought back from Africa and fashionable shops on the Kingâs Road, Chelsea. Sarah Ponsonby, in particular, was as colourful as the exceedingly bright pictures she liked to paint. (âThey were so vivid youâd want to dig a hole in the ground and bury them for ten years until theyâd calmed down,â says a friend). On occasions, she would be topless as she dug over the cabbage patch. Once she and two others rolled up to the local pub dressed as nuns and downed shots until they became so tipsy the landlord suggested it might be time to return to the convent. At this, âMother Superiorâ and her two acolytes gravely removed their habits to reveal chicken costumes. The Surrendell commune was infected by a spirit of rebellious lunacy, and dressing up was a favourite pursuit. âWe were always throwing Marvel comic-themed fancy dress parties and everyone would come dressed as a super-hero,â remembers John Rendall, who later became the social editor of Hello! magazine.

âWe had a dressing-up box, full of masks. Once, we heard a scream from the house. Our cleaning lady, Mo, had opened the bathroom door to be confronted by the musician Sam Gopal sitting on the loo wearing a gorilla mask.â In the early days, the house was uninhabitable, so people slept in one of the farmâs 11 barns. More luxurious accommodation was provided by a caravan, and Roddy Llewelyn often slept in his Ford Transit van. âWhen we moved in, no one had lived in the house for over 25 years,â says Rendall. âIt didnât leak, but it had been used as a grain store by the tenant farmer who was there before us. He moved out because it was haunted. Apparently, the ghost was a mother whose child had died in the house, and she used to come at night to the farmerâs daughterâs room and tuck her into bed. âI felt the ghost myself once, too, as a very strong presence on the stairs. There was also a gate on the estate that our dog refused to go through which was very mysterious.â

The house was on a ley line and there was a dolmen â a prehistoric stone structure â outside it, so there was a lot of talk about spirituality. The actress Diane Cilento, who had embraced Sufism â a mystical movement within Islam â joined in the fun following her split from her husband, Sean Connery. She was a neighbour and would drop round and earnestly explain the importance of being in touch with the natural world. She also brought âWoofersâ (participants in a scheme called Work- ing Weekends on Organic Farms). These were ordinary people such as doctors, bus drivers and teachers who came up for weekends to dig ditches, paint walls or clear ground before returning to their urban lives. It was a hive of activity. Artists worked in the garden, preparing their next exhibition, Sam Gopal banged away at his tablas and Mirren paced around rehearsing the lines for her next play.

âHelen always had incredible determination,â says Rendall. âShe was always very game for unusual parts and was terrific fun.â To help finance the operation, the group owned and ran a restaurant in Bath called Parsenn Sally. The restaurant was also a cooperative venture. Mike Tickner designed it, Roddy hung ferns from the ceiling so it resembled the Hanging Gardens of Babylon and his gardens provided the vegetables. One memorable evening, Mirren astonished diners by doing a turn as a celebrity cocktail waitress. Late at night, after the customers had left, the gang gathered round the piano for sing-songs, with the likes of Princess Margaret â whose party piece was the Glenn Miller song Chattanooga Choo Choo â throwing themselves into the fray. Back at Surrendell, they could cool off with a dip in their neighbour Lady Edith Foxwellâs swimming pool. Did they also go skinnydipping? âOh yes!â says Rendall expansively. âNo one had swimming costumes. Why bother?â Rendall was responsible for one of the more unusual guests to grace Surrendell: a lion. In Chelsea, where he ran a furniture shop, he had bought and raised a cub called Christian (a bad taste Biblical reference) and used to exercise it in the local parks.

BUT when Christian grew too large for the shop, a visiting customer â Born Free actress Virginia McKenna â solved the problem by arranging for the lion to be rehabilitated in the wild in Kenya. âThrough Christian, I knew lots of other large cat owners, and when someone asked if their lion could come stay at Surrendell for a week, of course I said yes. He wasnât quite as tame as Christian, but we used to take him on walks through the fields with Sarahâs wolfhound.â On a lead, one presumes? âOh, no,â says Rendall. âWhy would you want to do that?â Despite Mirrenâs âfive-skin-spliffâ reference, Rendall insists Surrendell was âa very innocent place. We had fun but it was quite naive and childish,â he says. âMy clearest memory of Helen is of her playing frisbee in the garden, and our most successful crop was horseradish.â Nonetheless, police later discovered 292 cannabis plants at Surrendell and Sarah Ponsonby was convicted of possessing drugs.

In the end, it was Surrendellâs most famous visitor, Princess Margaret â who turned up wearing âold clothesâ and âlooking like a farmerâs wifeâ according the villagers â who contributed to its break-up. Although she had to share a bathroom, she was given the best bedroom, but would, as Roddy has recalled, âput on her wellies, grab a fork and spade and show more enthusiasm than anyone helping out with the weeding and vegetablesâ. Rendall adds: âWe called her âMaâamâ, not âMargaretâ, but she was very easygoing. The great difficulty was the attention she brought from photographers and reporters who all came up to find her and Roddy. It shattered the idyll. None of us knew how to cope with that sort of attention. Weâd come to Surrendell to get away from that sort of life â but it followed us. âI remember once trying to throw reporters off the scent by driving out of the front gate while Roddy made his escape at the back.â

The feint didnât work and a high-speed car chase through the winding country lanes ensued. The peace of Surrendell had been broken. Ponsonby and Rendall eventually split up and she now lives quietly as an artist in France. Later the same year, the Parsenn Sally restaurant went into liquidation â and the hippy Surrendell dream disappeared for good.