Helen Mirren: Life is too short and precious to give a stuff
Woman's Day | August 21, 2017 | Original Source 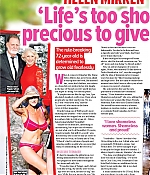 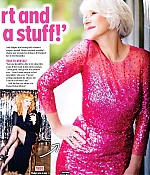 When it comes to living her life, Dame Helen Mirren has never been afraid to tear up the rule book. She married late, never had children, was reborn as a bona fide sex symbol in her 60s, laughs in the face of âbeauty secretsâ and if she has one regret itâs being âtoo bloody politeâ. âIf people treat me like the age I am, I get absolutely insulted, really cross. I hate when people give up their seat for me. No, no, no, I donât want your seat,â says the 72-year-old, who stuns on the latest cover of Allure magazine. Despite being one of Hollywoodâs most enduring sex symbols â who caused a media storm when she stepped out in a red bikini in southern Italy in 2008 at age 62 â Helen hates being labelled âbeautifulâ. âMaybe weâre attractive, interesting or mesmerising, but 90 per cent of women are not what youâd call beautiful. Of course, beauty is inside, but still itâs a word,â says the Brit star, who is one of only 23 actors to have won an Oscar, an Emmy and a Tony. âWhen itâs tied to pictures of people and amazing outfits on girls who can wear that stuff, itâs intimidating for the rest of us.â

Itâs hard to imagine the global icon ever feeling intimidated but Helen says she was plagued by insecurities throughout her teens and early 20s. âIt was the time of Twiggy, and I did not look like a twig. My cheeks were too fat, legs were too short, breasts too big,â she says. While she now agrees she was âthe clicheâ of sexiness, back then she didnât feel like it. âBlonde hair, tits, waist, which I hated at the time because it was not fashionable. You had to be thin and have a cigarette and only wear black. And I just never fit into that look.â If she could give her younger self some advice, sheâd be less self-conscious, say âf*** offâ more and stop being âso bloody politeâ. Now an ardent champion of womenâs rights, Helen, who married US film director Taylor Hackford in 1997, says she struggled with the idea of feminism in her younger years because she âliked wearing makeup and high heelsâ. But she came to realise those material cues didnât have to affect your ideals or mean you werenât a feminist. The actress loves the way the new generation of women have redefined beauty. âI love shameless women. Shameless and proud!â she says, adding thatat her heroes are women like Dawn French, Madonna, Kate Moss and Chrissie Hynde. She herself has never stuck to a beauty regimen or exercise routine â apart from a 12-minute Royal Canadian Air Force exercise plan.

âI sunbathe â I know I shouldnât but I love sitting in the sun. I drink wine and occasionally Iâll drink to excess. I eat French fries. Iâve never managed to go to the gym for longer than two months. I always forget to take my vitamins,â she says.

âIâve done everything but I havenât done too much of anything â Iâve never had a Coca-cola, ever. Sometimes I use hotel body lotion as conditioner for my hair. Iâm not particular. Life is too short and too precious.â A brand ambassador for Lâoreal, Helen was even happy to point out to them that the beauty industry should rally against using the term âanti-ageingâ. âI love shameless women. Shameless and proud!â And despite not having had cosmeticsmetic surgery herself, Helen certainlyy wouldnât shame any woman for doing soo if it helped her to feel beautiful.

âAnyone should be able to do what they want. If they look in the mirror and go, âI look goodâ and go out in a positive ositive way â I donât want anyone to feeleel miserable,â she says. âIâm not setting standards for others. Alll I can do is be who I am.â

And for that, we salute you Dame Helen Mirren!