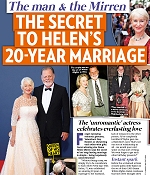 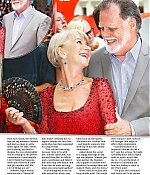 Forget sweeping romantic gestures, Valentineâs Day flowers or showering each other with gifts. Oscar-winning star Dame Helen Mirren says the secret to her long-lasting marriage is simple â being hopelessly unsentimental! âWithout being corny, we simply try to be considerate to each other every day,â tells Helen, 72, who celebrated an amazing 20 years of marriage to her husband, Ray director Taylor Hackford, on December 31, which also happened to be the filmmakerâs 73rd birthday. âTaylor and I arenât remotely romantic with each other,â admits Helen. âAnd actually, we appreciate the lack of romance in the other person. Iâd be completely horrified if Taylor gave me a Valentineâs card. Thatâs not our sort of relationship at all â we would pour cold water on that sort of thing. We even forget to get each other birthday presents!â

Before the acclaimed actress crossed paths with Taylor on the set of their 1985 drama White Nights, Helen confesses that she never thought sheâd be the type to get married. âI did very consciously choose my work over my relationships right up to the time I met Taylor,â tells Helen. âI was 38 when I met Taylor, pretty late in life.â Twice divorced, with a child from each union, the director had lost any romantic illusions and had no plans to settle down again. He says, âWhen youâre young, you tend to idealise the love relationship. Youâre looking for the perfect combination. Unfortunately, I donât think that happens. When you meet each other and get together mid-life, a lot of things are set.â

However, Taylor recalls experiencing a âchemicalâ connection from the moment he bumped into Helen and 13 years into their relationship, she became his wife. The film-maker certainly has no regrets, despite the fact their work often has them separated for long periods. âThat can be frustrating because I love to be with her,â admits Taylor, who has helmed films like An Officer and a Gentleman and Helenâs box-office flop Love Ranch. âBut it can also be quite exciting when you come back together.â That willingness to see his wife spread her wings, says Helen, is another secret to the coupleâs success. The star loves that Taylor champions her work â which includes films such as The Queen, Hitchcock and Gosford-Park â and happily supports him with any of his own artistic endeavours. Asked about the secret to a happy marriage at any age, she advises, âAlways give your partner the freedom and support to achieve their ambition. Encourage them and support them, and vice versa.â

When they do reunite after long periods apart, the couple prefer to stay in rather than socialise. In fact, Helen says she doesnât feel like they need to have âdate nightsâ to keep their romance alive. Instead, itâs dialogue that helps to affirm their relationship. âCommunication is so important and we do talk a lot,â says the actress. âActually, I probably donât talk to Taylor quite as much as heâd like me to â Iâm not the kind of woman to constantly ask how heâs feeling or want to pry if heâs quiet. âIâm quite self-contained and happy just to let people be. But we chat to each other about our day and things going on. Taylor absolutely loves a good gossip.â