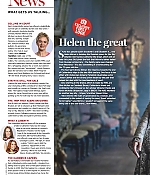 She has played Queen Elizabeth I and Elizabeth II… now Helen Mirren is donning the Russian crown for the Sky Atlantic mini-series Catherine the Great, which will air later this year. But given the fact that Mirren’s father hailed from Russian aristocracy – the family name was changed from Mironova – it’s also something of a homecoming for the 73-year-old star. The four-part drama follows the Empress towards the end of Catherine’s reign in the late 18th century. One focus is her affair with the statesman Grigory Potemkin (Australian actor Jason Clarke) and the strong union forged by the pair that helped her deal with the machinations of court.

Also starring in the drama, which is made by HBO, are Gina McKee as Countess Bruce, Catherine’s friend and confidante; Rory Kinnear as her adviser Minister Panin; and Kevin McNally (Inspector Japp in BBC1’s The ABC Murders) as another key ally – Grigory’s brother Alexei Orlov. “She rewrote the rules of governance by a woman, and succeeded to the extent of having the word ‘Great’ attached to her name,” says Mirren. I wouldn’t bet against the same being said of this new drama…