Catherine paid a price for success - and it's brutal
The Evening Standard | September 24, 2019 | Written by Evgeny Lebedev 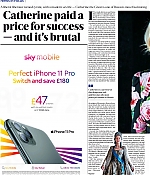 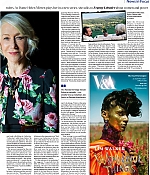 Itâs a windy afternoon and Dame Helen Mirren is sitting beside me, wrapped in a cashmere blanket.

She is recounting a story about John Travolta being confronted by a fork-wielding woman at an awards ceremony in Moscowâs Bolshoi Theatre. The acclaimed actor has actually come to talk about Russia. More specifically, the continued relevance of Empress Catherine II, whom she plays in the new HBO/Sky television series Catherine the Great, which begins next week.
Loading video She visited me in Italy, where we watched the sun sink over luscious Umbrian forests. Catherineâs rule (1762-1796) is mainly remembered for her ruthless deposition of her husband, Emperor Peter III, and for her curious love life, notably with Grigory Potemkin. In reality, her reign was one of the countryâs most interesting, and Catherine the Great seeks to shed more light on it. Sipping a mug of black tea, Dame Helen begins by explaining how Catherineâs own letters helped her prepare for the role. We agree that there is a vast amount of literature on her, notably the biographies from Isabel de Madariaga and Robert Massie.

âBut the most rounded understanding of her,â she adds, âI gleaned from her letters. It is a miracle in fact that the letters survive and there are volumes of them to Potemkin, Voltaire, friends, ambassadors, Paul her son, and to her husband before he was murdered.â She outlines the origins of this project, from a throwaway remark she made in an interview that she would love to play Catherine the Great, to the involvement of screenwriter Nigel Williams, with whom she had worked on a mini-series about Elizabeth I of England. She was also delighted with the casting of Jason Clarke (who looks âso Russianâ) as Potemkin, Catherineâs lover and governor-general of Russiaâs southern provinces. âItâs quite often difficult when you have a strong female lead to find a powerful male supporting actor,â she adds pointedly. Outside, the Umbrian hills are cast alight with the skyâs auburn glow. The actor reminisces on the thrill of filming in Catherineâs palace in Moscow.

âI was looking out of the same windows onto the exact same grounds. It was an extraordinary feeling being that close to her.â I ask her about the character of this contentious historical figure. âShe started as kind of a liberal, a liberator and finished a bit of a tyrant.â âThatâs what Russia does,â I reply. âHa!â she answers, âShe was clever, she had pragmatism and really understood the price you have to pay … This poor child, who had been brought from Germany, was left completely alone, untutored, without anyone to guide her. She had to watch and learn, and naturally she made mistakes.â When Catherine, born Sophie Friederike Auguste of Anhalt-Zerbst, arrived from Germany, Russia was ruled by another empress. Elizabeth I overthrew Ivan VI and launched a series of foreign wars, notably against Frederick the Great of Prussia.

She was a fickle ruler, obsessed with image and luxury, and took a disliking to Catherine. âCatherine,â adds Dame Helen, âby contrast was a pragmatist. She was clear headed and ambitious. She had a great flexibility of character and this talent saved her from being sent away from court by Elizabeth.â The actressâs passion for the role begins to reveal itself as she becomes more animated: âCatherine is a survivor in this dangerous role, and succeeds in becoming the most powerful woman in Russia … she outmanoeuvred them all.â I remark that by the 18th century Russia had seen four empresses, a country mile ahead of the rest of Europe. âQuite incredible,â she agrees. The acrimonious relationship between Catherine and her son Paul also interests her. âThat spiky mother-and-son relationship ended up being really awful by the end of her life. But in the beginning her letters to him were fun, maternal even.â Paul came to see Catherine as the murderer of his father Peter III, and once he ascended to the throne he set out to destroy her legacy.

Dame Helen softens her tone: âAlthough in his defence, when he first took over, he tried to be a reformer but just couldnât handle it. He didnât have the ability or vision. It was too vast, too unmanageable.â Russia is a brutal challenge that can break most people, I concur. âItâs the vastness of the landscape,â she suggests, âI especially love the 18th and 19th-century landscape paintings. Of course I love Malevich and Kandinsky, but there is one particular painting that stands out in my mind, of the road that the Decembrists took.â The Decembrist uprising was a failed aristocratic revolt against Tsar Nicolas I in 1825. Their exile is depicted in Sergei Miloradovichâs painting Road to Siberia. â[The painting] completely captures that sense of the endless landscape that is Russia; it just goes on. I think that vast and heavy landscape has played such an important part in moulding the Russian character.â But can this character be understood and appreciated in the West? âI think we look at Russia with awe, with a lack of comprehension, with fear and amazement. In the past, itâs always been associated with the bad guys, the villains. Of course, we do read the masters, Chekhov, Dostoevsky, Gogol, Pushkin, Tolstoy.â “At least in the past the bad guys were cultured. I think back to what Henry Kissinger once told me: âI love the Russian character because is so chaotic, yet so resilient.â

âFantastically spontaneous and full of instant extremes,â Dame Helen agrees, âboth passionate and considered. Also not forgetting, of course, that within Russia there are so many races and languages.â I mention that Catherine was in fact German. âYes, and I suspect it was her Germanic nature that helped her to survive, by providing her with a core of steel,â she says. I ask how she feels about someone who was so autocratic, even tyrannical. âRussia has always had its tsars,â she shrugs, âPutin is a Tsar, plus Ã§a change, plus câest la mÃªme choseâ. She pushes this comparison, âIâm sure Putin rejoices in being venerated by his people. Catherine wanted to be [the] sole power. They will not be subjected to Europe.â Dame Helen was born Ilyena Lydia Vasilievna Mironov, and I ask what her Russian heritage means to her. âIt means being an outsider. An immigrant. My mother was working-class from the East End of London and my father this Russian landowner, Ã©migrÃ©.â Her paternal family are originally from Kuryanovo, in Smolensk on the border with Belarus. âNow, visiting it, you would think you were in the 19th century with wooden buildings and an earth road,â she recalls. âSurviving through the spring mud and the autumn mud for a few stolen moments in the summer and then the frozen, desolate winters, all you concern yourself with is surviving within the vast unimaginable regions and reach of this continent.â

On her family: âThe story goes that my grandfather had lunch with Churchill discussing arms deals, this was during the revolution. He was staying at the Russian Embassy in London. Not many years later, he is a taxi driver in London.â She continues admiringly, âSomehow, he managed both with such grace. Remember, he was used to the difficulties of Russia, and its beauty. While his feet were in the mud, his head was always in poetry.â We touch on contemporary politics, both perhaps without much enthusiasm. âSure. Brexit: disaster. Trump: disaster.â And what about Russia, once again viewed with suspicion and fear? âWe are dealing with Donald Trumpâs love of Putin. In his dreams, Trump would love to be Putin, but luckily he lives in America.â Is the story of Catherine, presented in Catherine the Great, more relevant than ever? âI want to readjust her standing in history, to right the wrongs of how she is represented in the history books,â she insists. âThe price Catherine has paid for being a successful ruler … to fight the Ottoman Empire, to build, to expand, to keep Europe in its place, to quash revolutions … has been brutal. “Sheâs been branded a nymphomaniac who consorted with her horse, a despicable calumny propagated by her monstrous son, Paul. Historians have attacked her. How do they do it? The only way they can: through her sexuality. âWhat people fail to understand is Catherine was like us. She was a modern woman, a serial monogamist. Yes, she had a series of lovers but not that many, by modern standards. She had proper long-term relationships and was utterly committed and devoted. She loved.â

Dame Helen pauses to drink from her glass, black tea substituted by vodka. âNow, letâs celebrate her in true style.â

Catherine the Great airs on Sky Atlantic and NOW TV on October 3.