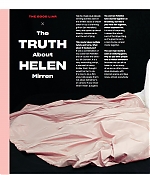 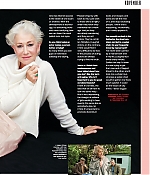 Helen Mirren is on the move.

Itâs late September, and the 74-year-old actress is calling from a train station business lounge in London, where sheâs about to board the Eurostar to Paris. The night before, she arrived at the U.K. red carpet premiere of her miniseries Catherine the Great carried by appropriately regal footmen. Now sheâs headed to France, where sheâll walk the runway (barefoot) at LâOreal Parisâ 2019 fashion show. Just a few days prior, she was busy on the set of Fast & Furious 9, reprising her role as an elegant underworld mastermind, and she can next be seen in The Good Liar (in theaters Nov. 15), a twisty thriller about an unassuming widow (Mirren) taken in by a charming grifter (Ian McKellen). In other words, the Oscar winner is having a busy fall. For EWâs Fall Movie Preview issue, we caught up with Mirren to talk about The Good Liar, manservants, beauty, and the art of deceit â at least until her train departs.

ENTERTAINMENT WEEKLY: This movie takes multiple twists and turns. What about it hooked you?
HELEN MIRREN: It was a combination of my costar Ian McKellen and of course the director, Bill Condon. Itâs a very interesting script, a wonderful, twisty thriller that I thought would be fun to do. Itâs nice to do a film about old people thatâs not about Alzheimerâs or cancer, if you know what I mean. [Laughs]

You and Ian McKellen have starred together on Broadway, but this is your first film together, which surprised me.
It is kind of surprising. I missed the whole Lord of the Rings thing, so itâs great to be in a real chunky, proper movie together.

The con artist movie is such an enduring genre. Why do you think people love to watch swindlers?
Because we can all be taken in, as so many of us are so often. Nowadays obviously, with internet scams and fake news, almost everybody who has internet access is the victim of one scam or another. With the development of technology, itâs becoming more and more terrifying how we can have the wool pulled over our eyes.

Do you think being an actor makes a person better at lying?
So many times you see guys on television sobbing and saying, âPlease bring my wife back to me, I just want to know sheâs all right,â when they know they murdered her a week ago. And yet they are utterly convincing, and they are not actors. Theyâre not Sir Ian McKellen. [Laughs] Actors, on the contrary, I think would find it very difficult to do that. In the process of acting, actors are always trying to find the truth.

Youâre a LâOrÃ©al Paris spokesperson and have talked about how you donât like the term âanti-aging.â Why is it important to you to speak out about beauty?
I think itâs terrible, the idea that we all have to look the same way. I find it very depressing, the thought of millions of girls wanting to have exactly the same lips as somebody else. So I think itâs important to promote diversity in looks and shapes and sizes and all the rest of it, and stop excluding people. I think thatâs happening, incidentally, and I really applaud it.

You recently arrived at the Catherine the Great premiere carried in a sedan chair. Do you frequently travel by manservant?
Iâve never been carried by a manservant ever in my life. [Laughs] But I loved every minute. Earlier that day Iâd been in a car trying to get from one end of Regent Street to the other, and it took me a whole hour, whereas a sedan chair wouldâve gotten me there much quicker. It could be the future of city travel.