Helen Mirren and Ian McKellen: She seemed very up-to-date in a way I couldnât be
The Irish Times | November 02, 2019 | Written by Tara Brady 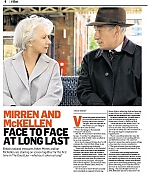 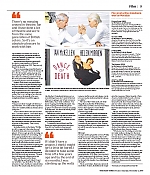 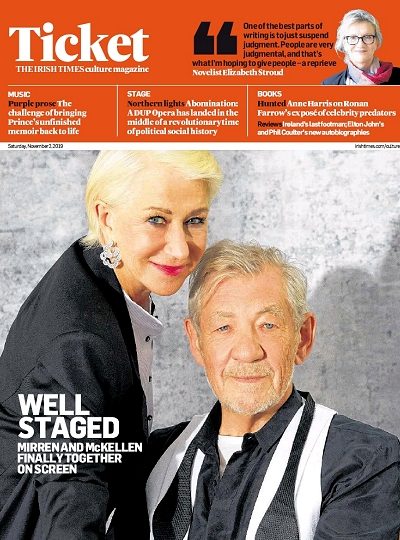 The Good Liar , directed by Bill Condon, brings two veteran actors together on screen for the first time

Veteran thespians Ian McKellen (80) and Helen Mirren (74) are looking toward one another. The pair, who star together in The Good Liar, are trying to recall the first time they met. âWas it backstage at Antony and Cleopatra?â she muses. âNo. No. We must have met before that,â he says. âI feel like Iâve always known about you. And we didnât have an affair as far as I can remember.â

After much toing and froing, theyâre still stumped. But they still find things to say about not remembering the details. âPeter Hall, the director of the National Theatre, used to say that all the members of Equity, our union, were like a theatre company,â explains McKellen. âEven if the actors had never worked together before they knew each other and they shared the same basic work principles. They knew how to work together, as if theyâd all come from the same drama school, which of course we havenât. So the moment that when you actually meet somebody as opposed to knowing about them or admiring them and wanting to meet them, isnât always clear. It doesnât mean that the moment wasnât significant.â He swivels toward her. He does have a clear recollection of seeing Mirren in David Hareâs Teeth ânâ Smiles in 1975. âI first saw you at the Royal Court,â he says. âI remember thinking: here is an actor in her time. She just seemed very up-to-date in a way that I felt I couldnât be.â He snaps his fingers to emphasise her vogueishness. There is no official collective noun for national treasures, but watching Mirren and McKellen interact â he teases her about her masterclass and attempts to blag a free copy; she invents compliments (âThat was delicious; that top looks great on youâ) â one is quickly convinced of the need for one.

For all their craft on stage and screen, they are, rightly, almost as well known for their off-duty conversation. Mirren, to date, has offered sage advice on everything from blackjack to boozing: âNever drink alcohol unless youâre celebrating something, upset about something, or itâs a day that ends in the letter âyâ. And never drink when youâre driving,â she told a Hollywood event in 2016. McKellen has told us that thereâs no sex in Middle-earth with one caveat: âI often thought my gravestone would say: âHere lies Gandalf. He came out,ââ he told the Independent in 2014.

Mirren and McKellen have previously worked on stage together in Dance of Death, on Broadway in 2001. They are very fond of the boards. âThereâs no messing around in theatre,â says Mirren. âYou canât throw fits because if itâs 7.30, the curtainâs going to go up and youâre going to have to perform. Ian and I have done a lot of theatre and weâre from the same generation of British actors. So itâs an absolute pleasure to work with him.â Neither of the actors can quite believe that The Good Liar is their first film together. Based on the novel by Nicholas Searle, the film concerns Roy Courtnay (McKellen), a seasoned con artist, who meets well-to-do widow Betty McLeish (Mirren) online. Sheâs is as trusting as he is devious, but, of course, the swindle is far more complicated than it would first appear. âIâm just not clever enough to be devious,â says McKellen. âSo I admired the way those characters could turn like an old taxi cab on a sixpence.â âI have a theory that actors are very bad liars,â continues Mirren. âAnd I think thatâs quite reassuring. Because our process is always to find a certain truth in the story. People think that acting is a kind of lying. But Iâm trying to find the character somewhere in my personality. Thatâs a very different thing.â

McKellen warms to the theme: âAll the worldâs a stage; isnât that what they say? And all the men and women are merely players. When we get up in the morning, we decide what costume we are wearing. You dress appropriately for the occasion and you put a certain side of yourself on display. If you are going somewhere this evening with friends youâll take another costume with you. So we only do what everybody else does all the time. Actors are not that different; weâre just a bit more adept.â The Good Liar reunites McKellen with Bill Condon, who first directed the actor in the 1998 film Gods and Monsters. The pair have subsequently collaborated on Mr Holmes and Beauty and the Beast. âBill called up and said: I think Iâve got our next film,â says McKellen. âSo I said: when do we start. And then I realised Helen was in it. The actual script, for me, was not the clincher. If somebody invites you to a wonderful party you donât need to find out what youâre going to eat. When it comes to Bill Condon, I have total confidence. You know itâs going to be brilliantly made. You know itâs going to be brilliantly photographed. You know the costumes are going to be fantastic. You know the whole production will look after you. Bill always creates a wonderful atmosphere, whether itâs a big film or a small one. Heâs always excited. Itâs as if he was at somebody elseâs party rather than the one heâs throwing himself. I remember him on Beauty and the Beast on a big day when there must have been 150 cast members dancing and singing and as many again behind the camera. And he was in total charge â not in a bossy way, but in the way that heâs always available.â

The star of the X-Men and Lord of the Rings films marked his 80th birthday earlier this year with a one-man tour which he has characterised as âsome Shakespeare, a bit of Tolkien and a certain amount of gay stuffâ. Last June he had already performed at 80 venues, raising Â£2 million for theatre charities, when he announced a further 80 shows at the West Endâs Harold Pinter Theatre. The extensive tour puts him back in touch with his repertory roots. Despite his high profile and Oscar nominations, the job and its rewards, he says, havenât changed. âIn rep I used to get paid in cash on a Friday but that was never the point of the weekâs work,â he recalls. âYou needed that money to be able to buy some food and pay for your digs but the purpose of the job was over and done with by the time you were paid. Doing it was always the reward. I donât have any grandchildren to play with. I donât have those sorts of responsibilities, I donât have to keep my family going financially or geographically. So if I didnât have a project, I think I might get a little bit bored. I decided to take some time off a few years ago and by the end of six months, I was climbing up the walls.â

Their careers have, they note, mirrored each other. To date, McKellen is the recipient of six Laurence Olivier Awards, a Tony Award, a Golden Globe Award, a Screen Actors Guild Award, a BIF Award, two Saturn Awards, four Drama Desk Awards, and two Criticsâ Choice Awards. He has also been shortlisted for two Academy Awards, five Primetime Emmy Awards, and four Baftas. Mirren, meanwhile, has achieved the Triple Crown of Acting, having won the Academy Award for Best Actress in 2007 for her performance as Queen Elizabeth II in The Queen and received the Olivier Award for Best Actress and Tony Award for Best Actress in a Play for the same role in The Audience. Both actors have a net worth of about â¬45 million, not that they seem all that bothered about the paycheques. âWhen you start becoming an actor you are really, really not doing it for the money,â says Mirren. âBecause if you are doing it for the money youâre really on to a loser. You donât have a great chance of making a lot of money â 80 per cent of actors at any given time are out of work. As a young actor youâre aware of what youâre walking into: insecurity, unemployment, struggle, and low pay.

So youâre not doing it for the money, any more than any other artist is. So then, if you have the unbelievable luck that Ian and I have had, itâs incredible. Finding success, doing movies, and suddenly getting paid much more than we ever dreamed that we would make.â

Priest of Love (1982): Ian McKellen v Janet Suzman
Somewhat forgotten now, Christopher Milesâs thoughtful study of DH Lawrenceâs later years is notable for an earthy turn from McKellen as the author and a long-suffering one from Suzman as Frieda Lawrence. They fight each other to a standstill.

Scandal (1989): Ian McKellen v Joanne Whalley
A quarter of a century after the Profumo affair, the British media purred over this glamorous retelling. McKellen, playing the minister for war, oiled his way effectively round the charismatic Whalley as Christine Keeler. She holds her own.

X-Men (2000): Ian McKellen v Patrick Stewart
And onwards for decades of sequels . . . The two old chums, both working-class lads from the north, have an absolute ball as Professor X and Magneto. McKellen chews more furiously. But Stewart holds the centre ground.

The Dresser (2015): Ian McKellen v Anthony Hopkins
Okay, itâs a TV movie, but no opportunity to pit Hopko against McK can be resisted. Previously filmed with Albert Finney and Tom Courtenay, Ronald Harwoodâs plays concerns a theatrical knight (Tony) and his irritable dresser (Ian). In . . . their . . . element.

All Is True (2018): Ian McKellen v Kenneth Branagh
The title fight we cried out for. McKellen is a camp Earl of Southampton and Branagh is an admiring Shakespeare in a film that exceeded expectations. Ian steals their extended duologue from under the Belfast manâs nose.