Helen Mirren: I find it hard to say no to great roles
OK! Magazine | February 15, 2022 | Written by Marc Baker 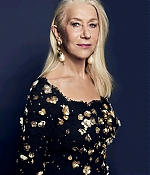 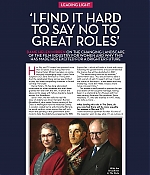 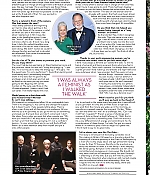 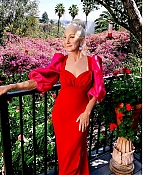 Her film and TV career has spanned more than 50 years, and during that time Dame Helen Mirren has taken on some seriously challenging roles â from Prime Suspectâs DCI Jane Tennison to The Queen. And the celebrated Oscar winner was thrilled to play her latest compelling character in British comedy The Duke.

Dame Helen, 76, has long advocated more parts for older actresses and sheâs been granted her wish with this film, in which she takes centre stage with fellow Academy Award winner Jim Broadbent.

Set in 1961, the film tells the real-life story of elderly taxi driver Kempton Bunton (Broadbent), who steals Goyaâs portrait of the Duke of Wellington from the National Gallery in London. Aided by his wife Dorothy (Mirren), he sends random notes saying they will only return the painting if the government does more to help the elderly by scrapping the BBC licence fee â which will strike a chord with many following the governmentâs announcement that the licence fee will be abolished in 2027.

âThe whole story took me by surprise,â Dame Helen said. âYou would want to take it with a pinch of salt if it wasnât all true. I loved the charm of the script â it was sweet and very endearing. I love the 1960s. It was a more naÃ¯ve, innocent time.â

The actress is well placed to portray the ups and downs of the coupleâs marriage, having been in a relationship for 25 years with her own partner, American film producer Taylor Hackford, 77, who she married in 1997. Here, she tells us moreâ¦

After landing this role in The Duke, do you now feel there will be more equality for women in film and TV?
I have enormous optimism for that. Itâs one of the reasons I want to stay alive. Iâm so curious about what happens next. Certainly in the last 10 years with race, gender and so many things, there have been incredible breakthroughs on things we thought were unthinkable 30 years ago, like gay marriage. Itâs so exciting to see these things happening. Now to walk on a set and see itâs 50/50 women, even five years ago that was not possible. So we are just at the threshold of that. Iâm very excited to see what happens next.

Youâre a natural in front of the camera. Was that always the case?
I was utterly useless at the beginning as I had no idea about getting in the shot or the frame of the camera or what do when you are in the frame. I felt when I started out in film it was like deer in the headlights acting. It was like âActionâ and then âFreezeâ. I did not know what to do. It took me a long time. I did a film called Excalibur once and none of us had an idea of what we were doing. We didnât realise we couldnât change the shot and we had to do what we rehearsed. Even those fundamentals I did not understand.

You do a lot of TV chat shows to promote your work. Do you enjoy them?
The most frightening was being on David Letterman once and the producer came out and said âKeep the energy up.â I was like, âIt is not my job to keep the energy up.â I thought, âIâm the guest here. Iâm not a performer.â I found that alarming and intimidating and I immediately slumped lower in my seat. But itâs good to try and keep oneâs mind open and not just be fixed on the story you say you were going to tell. Rapping with James Corden on The Late Late Show in the US was rehearsed. I learnt it and I had cue cards. That really helped me a lot.

Would going on a chat show with your husband help? We hear he canât stop talkingâ¦
My husband is a compulsive talker. Itâs an unstoppable train. There is no stopping it. You can try and change the subject but it doesnât work. I hate people telling jokes. Theyâre often a man thing and all they want is an audience. All you want to do is to get away, so you go to the loo or something and sneak out the back door and donât come back. I donât like jokes. Funny jokes are great but when people say, âOh, have you heard this?âall they want is an audience listening to them and I find that very annoying. Iâm not a confident person. Iâm very unconfident and in our job thatâs difficult. What I do is take attention away from myself and put it onto other people.

Youâre often seen as a strong woman on screen. Do you think your role in Prime Suspect helped mould that?
It was a show where a woman was in charge of men and they werenât sure it was going to work. There had been Cagney & Lacey, so you did have a female-led police show, but that was two women. The idea of one woman and her struggle with sexism, that had never been shown before and they were not sure it was going to work and that the audience would accept something with a female lead. And my God, how times have changed. Itâs incredible.

Do you think that role helped you escape being typecast as a âsexy womanâ on screen?
As the blonde? Yes, it did. I recognise that role. That role came at me at an age. I was 40 when it came and it was a brilliant role to take me into the next era of my acting life. I was very lucky that it came along. At 40 youâre considered older but I think thatâs changing a lot. But in those days youâre right. You think of 60 as old, but itâs not.

Thanks to your work empowering women, youâre a feminist role model. How do you feel about that?
I think I was always a feminist as I walked the walk. To me itâs being a humanist and being a person doing what you feel is your right to do. Thatâs how I operate. Iâve always been a bit of a girlie girl and I liked make-up and dresses and high heels and sexy underwear when I was younger. And they were not very feminist things. I believed I had to have my own money, I did not believe in marriage actually. I didnât get married until quite late in life and I believed in having my autonomy as a person. I was always a completely independent person. Later, when those ideas were accepted under the idea of feminism I felt âOK, I can be a feminist now.â

Whatâs next for you? Do you think youâll ever go back to the theatre?
I try to go back to the stage every few years but it gets difficult as you get older. Itâs only two or three hours a night but you work from the minute you wake up in the morning, as everything is geared towards that moment. Itâs like, âWhen do I eat and when do I rest? Itâs a challenge, like, âCan I do it still? Am I capable?â Thereâs a sense of challenge and a sense of duty as thereâs a slight leftover of, âWell, that is real actingâ and film is something else. Thatâs not true but itâs a very different kind of energy and commitment. So itâs a combination of these things. Iâm lucky Iâve got to a point where if Iâm asked to play a role on stage itâs a great role.

Tell us about your new film The Dukeâ¦
The story is reminiscent of the Ealing comedies era of film-making in Britain. Itâs based on a true story about the hijacking of a famous painting of the Duke of Wellington by a man who is very angry about old age pensioners having to pay for their TV licences. Dorothy is the practical one, which the woman so often is in the family â sheâs keeping the family going. Kempton is the dreamer, but heâs very committed and courageous in many ways. We should not only take a leaf out of Kemptonâs book, but also Dorothyâs â dreaming is all very well, but you still need to pay the bills. Itâs very important when playing an old married couple that the audience believe that relationship. With Jim, I slipped into the role of his wife very easily, there was no effort on my part. ok!

The Duke is released nationwide in the UK on 25 February