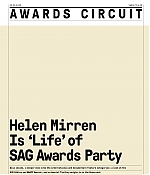 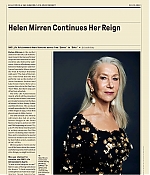 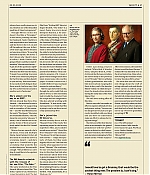 Helen Mirren is the perfect choice for the SAG Life Achievement Award, that rare performer respected and awarded for their work but also beloved by audiences. Able to effortlessly move between Shakespeare and Hollywood spectacle, Mirren joined the âFast & Furiousâ franchise with 2017âs âThe Fate of the Furious.â Fans loved that she was perfectly cast as the mother of Jason Stathamâs Deckard and Luke Evansâ Owen. Sheâs set to reprise the role in the final two âFastâ films, but thatâs only part of her busy schedule.

The SAG Life Achievement Award, which will be presented to her by Kate Winslet, is an honor previously bestowed on the likes of Robert De Niro, Sidney Poitier and Rita Moreno. The accolade actually precedes the SAG Awards, which began in 1995; it was first given in 1962 to Eddie Cantor.

The 28th annual SAG Awards will return live Feb. 27, at the Barker Hangar at the Santa Monica Airport, and air on TNT and TBS beginning at 8 p.m. ET/5 p.m. PT. The show awards prizes in acting categories for film and TV, including stunt ensembles, and is considered a special honor as winners are voted on by their fellow actors, members of SAG-AFTRA.

Mirren spoke to Variety on the eve of the honor about her career and whatâs up next. Hereâs a look at a few things you might not know.

She was stunned to receive the SAG Life Achievement Award.
âIt was a total surprise to me!â Mirren says of being told about the honor. âI think especially coming from an American organization. I mean, America has always been really generous to me, which is one of the beautiful qualities of America in general.â

Though Mirren notes she doesnât feel like a âforeignerâ in the States, pointing out that her husband, Taylor Hackford, and stepchildren are American and she lives in the U.S. on and off throughout the year. In fact, a few years ago, Mirren became an American citizen. âIt was a big moment in my life,â she notes. âI donât know why I hadnât done it before, I think I hadnât fully grasped that I could have dual citizenship.â Mirren aced the test â âI got all of the questions right!â â and says she got emotional the first time she flew into the States. âI mean itâs so exciting. You come in with your American passport for the first time and they hand it to you and say, âWelcome home.â It was such a lovely thing to hear those words. And in a way, I feel my SAG achievement award is another sort of welcome.â

Sheâs almost all the way to an EGOT.
Mirren already has three SAG Awards â she won two for 2001âs âGosford Park,â in supporting and as a member of the ensemble â and for lead female actor for 2006âs âThe Queen.â She notes itâs a beautiful statuette. âThe SAG Award is very pretty,â she says. âI mean, a lot of awards are not so pretty. Some of them are positively awful. But the SAG Award is lovely.â

Mirren knows awards; sheâs an Oscar, Tony and multiple Emmy Award winner. In fact, all she needs to cinch the EGOT is a Grammy Award â and sheâs open to it. âI would love to get a Grammy, that would be the coolest thing ever,â she says with a laugh. âThe problem is, I canât sing. It would have to be a spoken word album.â

The SAG Awards coincide with the release of her new film, âThe Duke.â
The same weekend as the SAG Awards, Mirrenâs latest film âThe Duke,â opens in U.K. theaters; it comes Stateside in April. The last film from âNotting Hillâ director Roger Michell, âThe Dukeâ is a sweet, funny true story about Kempton Bunton, a 60-year-old taxi driver who stole a the famous Goya painting âPortrait of the Duke of Wellingtonâ from the National Gallery in 1961. But his motivation wasnât greed; Bunton was asking the government to invest in better care for the elderly, including abolishing a television tax for pensioners.

Jim Broadbent stars as Bunton while Mirren portrays Dorothy, his devoted wife who is kept in the dark about his scheme. Mirren says she wasnât familiar with the story, even though it happened in her lifetime. âI was completely unaware of it. I mean, I guess I was a teenager and I donât know many teens who read the paper. So when it came to me, I couldnât believe it was real, it just seemed so extraordinary.â

Mirren says she loved Dorothy, though she only could find one photo of her, so she essentially had to build the character from the script and her imagination. She also adored working with Broadbent. âIt was such a special experience. I think that film is going to up be up there in sort of my personal top five.â

Sheâs joined the DC Universe.
Mirren recently shot a role in âShazam! Fury of the Gods,â the upcoming sequel to the hit 2019 superhero film, and couldnât sound more excited. âI loved the first âShazam!ââ she enthuses. âYou know, Iâm not big on superhero movies â I enjoy the spectacle of them, but they seem slightly silly to me.â But that was exactly what appealed to her about âShazam!â She continues, âIt was very funny and it was true to this idea that kids who feel insecure about their lives in general engage in the fantasy of being superheroes. So I loved the whole idea of it.â When the filmmakers reached out to her about playing Hespera, a daughter of Atlas, Mirren says she was thrilled. âAnd, incidentally, itâs a fabulous role.â

Other upcoming projects include âWhite Bird: A Wonder Story,â adapted from R.J. Palacioâs book that focuses on Julian, the school bully in her previous novel âWonder.â Mirren will play Julianâs grandmother, who tells him stories about escaping the Nazis in her youth. She has also filmed âGolda,â in which she portrays the Israeli prime minister during the early days of the Yom Kippur War.

She still loves acting after all this time.
Mirren says she has made an effort to explore all kinds of roles and genres, noting, âSuccess can be dangerous because you get overly identified with one thing and you have to consciously make an effort to always be trying new things.â

She cites one of her best-known roles as an example: she gained prominence with her performance as detective chief inspector Jane Tennison, the brilliant and uncompromising lead of the smash series âPrime Suspect.â After seven seasons, she made the choice to end the show. She says, âI realized if I was knocked over on the street tomorrow, I have a horrible feeling the headline would be âJane Tennison Hit by a Bus.ââ

She adds that she still learns new things about the craft of acting with each role and thinks of her career as still in progress, which is why she still canât believe sheâs begin honored with the SAG Life Achievement Award. âYou never believe this will happen to you and you never feel sufficient, especially when you look at some of these other recipients and their body of work. But thatâs not to say I wonât be gratefully accepting it!â