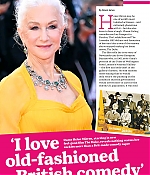 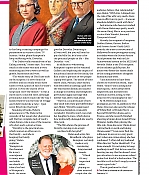 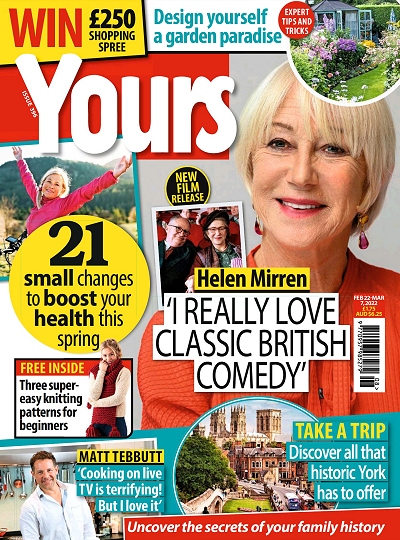 Helen Mirren may be one of the worldâs most talented actresses â and extremely glamorous with it â but she also loves to have a laugh. Classic Ealing comedies such as Passport to Pimlico, The Ladykillers and The Lavender Hill Mob are real favourites of hers and this is one of the reasons she so enjoyed making her latest movie, The Duke.

The film tells the true story of Newcastle taxi driver Kempton Bunton who, in 1961, stole Goyaâs portrait of the Duke of Wellington from Londonâs National Gallery â the first and only theft in the galleryâs history. He sent ransom notes saying that he would only return the painting on the condition that the government would invest more in care for the elderly UK population. It was tied to his long-running campaign for pensioners to receive a free TV licence. Helen plays Kemptonâs long-suffering wife, Dorothy.

âThe Duke really reminds me of an Ealing comedy,â Helen says. âIt is very much in the same vein and is very endearing and very sweet as well as gentle, humorous and wise.

âThe whole story of The Duke took me by surprise. Iâd never heard of it before and you really would have taken it with a pinch of salt if it wasnât all true. I loved the charm of the script and I love the Sixties â it was a more naÃ¯ve, innocent time, although personally I didnât much like the way I looked then! It was the time of Twiggy and I didnât look like a twig â I just never fitted into that look.â

Speaking of looks, Helenâs appearance in The Duke is the opposite of her usual uber-glamorous self. But her complete lack of vanity when doing a role is one of the reasons why sheâs such a great actress.

âDorothy is the practical one, which women so often are in the family â and she is keeping the family going,” Helen explains. âKempton is the dreamer. He is very courageous in many ways and while we should all take a leaf out of Kemptonâs book, the same goes for Dorothy. Dreaming is all very well, but you still need to pay the bills! So, letâs hear it for the practical people in life â like Dorothy â too.â

In addition to witnessing Kemptonâs capers at the National Gallery and exploring the impact of his political ideals on the family, the film is also a portrait of two people coping with grief. The death of their eldest child, Marian, years earlier, was described as casting a pall over the real Bunton family and caused a change in Dorothy and Kemptonâs previously happy marriage that neither was able to talk about.

âThere is a crack because of how they dealt with their grief differently,â says Helen. âDorothy suppressed it whereas Kempton constantly revisited it. Dorothy wonât even visit her daughterâs grave, which shows how profoundly damaged she was by this event.

âThe film shows the process of Dorothy moving on to accept and deal with her grief.â

âI think itâs very important when playing an older married couple that the audience believe that relationship,â says Helen. âWith Jim, I slipped into the role of his wife very easily, there was no effort on my part â it was an absolute delight to work with him.â

And anyone who has ever worked with Dame Helen says pretty much the same thing. She is, as a previous co-star Kate Winslet, has said, âEveryoneâs friendâ.

Already the recipient of umpteen Golden Globes, Oscars, Baftas and Screen Actorsâ Guild (SAG) awards, she is set to receive one of Hollywoodâs most prestigious acting accolades when the Screen Actors Guild presents her with its Life Achievement honour at the 2022 SAG Awards. Helen is the 57th recipient of the industry guildâs prize, for actors who foster the âfinest ideals of the acting professionâ alongside humanitarian work.

âI am honoured to have been chosen to receive the award,â says Helen. âSince I was a young actor starting out, I have always been inspired by and learned from American screen acting, so this award is very meaningful for me.â
Future projects

At 76, Helenâs output is as prodigious as ever. In addition to The Duke, this year also sees the release of White Bird: A Wonder Story â a Second World War drama set in France, and she recently finished shooting a biopic about Israeli Prime Minister, Golda Meir, playing the title role. Does she never think about cutting back on work and taking things easier?

âI can never find the willpower to say no to a very good part when one comes along,” she has confessed, âI often tell my husband (film director Taylor Hackford), âIâve done enough, Iâm not going to keep pushing myselfâ. But heâs so used to hearing me say that he doesnât even pay attention to me anymore when I make that kind of a declaration. The terrible truth is that I simply cannot resist a good role.â

“I was 15 or 16 when it dawned on me that there was incredible inequality between men and women. I was enraged by the monstrous unfairness of it as I became more and more aware of what was going on â what women were allowed to do, werenât allowed to do, what professions were open to women, what they were supposedly not suitable for. Itâs been so wonderful to experience and witness the change in attitude.â

The women in Helenâs life clearly mean the world to her.

âIâm very lucky,â she said. âI have a sister whoâs a very important part of my female world. I have some very, very old friends that Iâve known since I was in my early 20s and those women are incredibly important to me.â

Helen was brought up in Southend, the daughter of an aristocratic Russian-turned taxi driver father and an English mother who was the daughter of Queen Victoriaâs butcher â Helen has never held with personal airs and graces and says she does not intend to start doing so now.

âEverything I have, I have earned,â she says, proudly. âI come from not a working-class situation, but certainly a financially impoverished one. We didnât have a television when I was growing up, or a washing machine or a car. But the one thing my parents taught me â and it was very important for me as a woman â was, âYou must become financially independentâ.

When I became an actress, it was very important to me to become financially secure and I have always worked. And I am, now, financially independent and I did it myself â nobody helped me. I take great pride and pleasure in that.â

The Duke is released in UK cinemas on February 25