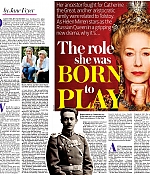 Dame Helen Mirren was destined to play Catherine the Great, the russian empress who juggled international aggression with art collecting, health and legal reforms, an army of lovers and a zest for unusual sex toys.

not just because the actress, like the empress, is a strong, emancipated woman who never worries about what anyone else thinks. And it has absolutely nothing to do with sex, although Helen was once described as âStratfordâs very own sex queenâ â a reference to her Shakespearean credentials â and has even expressed relief that Catherine did not have the buttoned-up attitude to sex shared by all the other royals she has played, namely Queen Charlotte, Elizabeth i (the âVirgin Queenâ) and Elizabeth ii. âCatherine was completely open â there was no shame about it,â Helen has said. No, her zeal for her role in the lavish TV drama Catherine The Great, which airs tonight from 9pm on Sky Atlantic, comes because she was christened ilyena lydia Vasilievna Mironov. She hails from a russian family of immaculate pedigree, with aristocracy on one side and military might on the other, and was only recently reunited with relatives in Moscow.

She is also related by marriage to the Tolstoys â and her great-greatgreatgreat- grandfather, Field Marshal Mikhail Kamensky, actually served under Catherine the Great, achieving a string of military victories before losing his nerve on the eve of the battle of Pultusk in 1806. Come to think of it, Dame Helen, 74, does have rather a regal look about her. âi think i was blessed with an expressive face and a russian soul,â she once said. She was not, however, blessed with family money, titles or lush green acres. Instead, she grew up in leigh-onSea, Essex, in a suburban semi with no central heating and ice on the inside of the windows in winter. She was the middle of three children of a cab driver father and a mother who was five years his senior and the 13th of 14 children. In contrast, her great- grandmother, lydia, was the daughter of Count Andrei Kamensky, a landowner and nobleman, and her grandfather, Pyotr Vasilievich Mironov, grew up with his six sisters in aristocratic luxury. While the sisters enjoyed a cosseted life shuttling between Moscow and their home at Kuryanovo, a sprawling family estate in Smolensk, on the border with Belarus, Pyotr joined the army. âHe was a proud and loyal member of the Tsarist army,â according to Dame Helen. He was also bright and rose rapidly through the ranks. By World War i, he was an emissary to the last tsar, nicholas ii, and, in 1916, he was sent as part of a small delegation to london to negotiate an arms deal with the British.

He took his wife, Marusia, and their children, irina, five, Vasily, three, and baby Olga, but they travelled light: just two pictures of the tsar and tsarina, Pyotrâs typewriter, a few roubles and his wooden trunk. They didnât need much luggage because, as honoured guests and representatives of the tsar, they would be feted by the British Government and housed in luxury at the russian Embassy. But that all ended in 1917, when the russian revolution wiped out the old order and aristocrats, including the Mironovs, were stripped of their land and homes. In london, the young family were stranded. Pyotr knew they could never return home without risking leninâs firing squads. Used to extreme riches, they had no money, very few clothes and nowhere to live. So Pyotr took the only work he could find with his halting, heavily accented English â a taxi driver. â My grandfather embraced his army life and his taxi driving with the same grace and style,â Mirren has said. In his new life, he clung to the old via letters exchanged with his sisters (until they stopped arriving during the Stalinist purges of the Thirties and Forties) and via the tales of grand houses, stables and sprawling estates with which he regaled his granddaughter, ilyena (Helen), as he bounced her on his knee. âIt was always me he told the stories to,â she has said.

Helenâs father, Vasily, who as a young boy was pictured on a chaiselongue in a velvet tunic with a lace collar, was just as resourceful. He earned a living playing the viola and working in a textile warehouse in londonâs East End. later, after he met and married Helenâs mum, an East Ender called Kit, whose grandfather had been a butcher for Queen Victoria, they moved to leigh- on- Sea and he drove a taxi like his father. But while he adored his wife and three young children, he always felt an outsider and wanted his family to feel properly British. He never spoke of the past, and when Helen was ten, he anglicised their names. Vasily Mironov became Basil Mirren and his children became Katherine, Helen and Peter, as he progressed from cabbie to driving instructor to civil servant in the Ministry of Transport, while his middle child started her acting career in school plays and later drama school in london. By the age of 25, she was being hailed as the best thing to come out of Southend. Despite her English upbringing, Dame Helen has said she still sometimes feels an outsider and âvery russianâ, particularly when she is feeling low. If there is a melancholia in the family for what might have been, it is hardly surprising. neither her father nor grandfather returned to russia before they died. Indeed, helen was the first Mironov to visit their homeland, on a cultural exchange visit in the lateSixties, when she was already an established actress at the royal Shakespeare Company. It was an official trip with very close Soviet supervision, though, and she had no opportunity to trace the old family estate or relatives. It was only when her mother died in 1996 that helen found her grandfatherâs old wooden trunk, full of letters from his sisters in tiny writing on yellowing paper. At the time, she was grieving for her mother and busy with her career, so she put them to one side. It was another ten years before she sent them to a translator and the Mironov family history was finally revealed. The letters inspired a radio 4 drama (in which helen starred as her great-aunt Ilyena) and a trip to Moscow, during which she tried, and failed, to find traces of the family home or any surviving relatives. Devastated, she concluded that her family had been wiped out in Stalinâs Gulags.

But the hunt was not over. In 2005, a russian-based journalist started digging and the following year discovered that, while the family land was indeed all gone, helenâs great-aunts had somehow survived Stalin. After being thrown out of their home by the Bolsheviks, helenâ s greatgrandmother Lydia and her six daughters moved to Moscow, where three of the sisters â Lydia, Valentina and Antonina â married. The other three â Ilyena, Zinaida and Ksenia â remained spinsters and lived with their mother until her death in 1928 in a cramped, windowless flat in the capital. They worked, went to the theatre and read to each other, but it was a hard life. By the time Germany invaded russia in 1941, the sisters were growing old and, despite the harsh conditions and severe food rationing, decided to stay in Moscow. Zinaida and Antonina died during the war, and Pyotrâs favourite sister, Ilyena, died four years later, aged 79. Ksenia lived until 1962 and Lydia until 1965. The last sister to die was Valentina, in 1981, aged 90. But there were descendants. The sisters who had married had children and grandchildren, so helen and her siblings had cousins.

In 2007, helen and her sister Kate returned to russia. They stood on the edge of a thick wood on the former estate where the family home had once been, and planted three rose trees (the estate had once been full of roses) in memory of their great-grandmother. Then finally, in Moscow, they met their russian relatives and wept. âI hadnât expected to feel so close to them so quickly, but there was a real sense of family,â helen said. With her deep russian roots, no wonder this most acclaimed of British actresses was so delighted at the chance to play the extraordinary woman who transformed her father and grandfatherâs country.