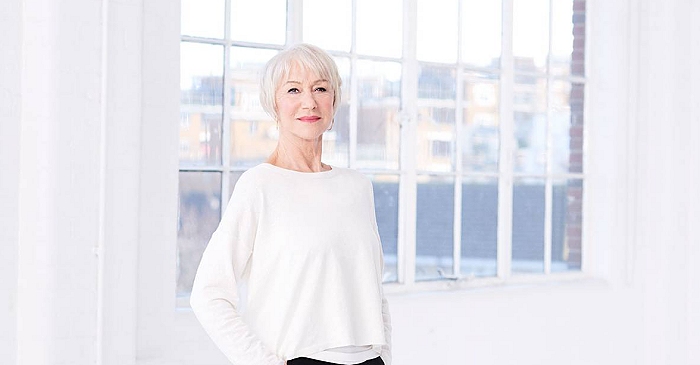 In honour of Mental Health Awareness week, Mirren and other stars have joined forces with LâOrÃ©al Paris to bring a powerful message about the importance of fostering and maintaining self-esteem. Hear hear, we say. Spurred by the unsettling statistic that 40% of young people in the UK say they don’t believe in themselves, LâOrÃ©al Paris has leant on the star power of some of its famous faces for a rousing and joyful new venture: the “My Self Worth’ Podcast. In partnership with The Prince’s Trust, the podcast tackles issues around body image, and combines the power of positive affirmations with advice from psychotherapist Lucy Beresford. In the podcast, Mirren talks candidly about her own personal journey with her self-esteem, and how it remains something that is crafted, not given. “Those negative thoughts are always lurking there under the surface âeverybody feels this way, you arenât the only one,” said Mirren encouragingly. She went on to reveal, “If I walk onto a movie set and see these humongous movie stars I feel incredibly intimidated. Sometimes I lock myself in the loo to give myself a talking to: ‘You can do it Helen, donât worry, you can do it!’ What always comes up in my head is that ‘Iâm boring, Iâm stupid, Iâm not exciting enough.’ In my job I meet a lot of extraordinary people, and for me, itâs incredibly intimidating.” Also featured are model Iskra Lawrence, Olympian Tom Daley and activist Katie Piper, among others. Free to download and listen to, the podcast is available on Google Podcasts, Spotify, iTunes and online.

Social Bite’s sleepout is going global as the Edinburgh charity’s fundraising event will take place in Times Square, New York – with the help of Will Smith. Dame Helen Mirren has also signed up to Social Bite’s biggest charity campaign yet, with 50,000 people around the world sleeping outside to raise money for homelessness. Sleep in the Park, the brainchild of Social Bite founder Josh Littlejohn, has been growing and growing since it began in 2016. In December, 10,000 people took part in sleepouts in all of Scotland’s major cities. On Wednesday, Social Bite announced The World’s Big Sleep Out would take place on December 7 this year. The flagship event will be in Times Square, with Will Smith reading a “bedtime story” to those taking part. Dame Helen will read to those in London. Events will also be taking place in Edinburgh, Chicago, Newcastle, New Delhi, Santiago, Dublin, Newcastle, Dublin, Belfast, Cardiff, Brussels, Barcelona and Madrid. Social Bite said: “The campaign is positioned as the ‘Live Aid’ for the issue of global homelessness – a one-off international event aiming to raise an incredible $50,000,000 and focus global attention on the issue. “Holywood Stars Dame Helen Mirren and Will Smith have agreed to perform the ‘bed time story’ in London and New York respectively, with more big names and musicians yet to be announced throughout the world.” They added: “Partners for the campaign include the Malala Fund, UNICEF USA and the Institute of Global Homelessness, who will be able to support a target of around 1,000,000 homeless and displaced people with the funds raised. Local charities will also significantly benefit where the events take place. “What was born in Scotland is now being adopted worldwide, creating a unity like no other before. “We set out on this mission to be a Scotland for the world to follow, and we hope that this campaign will inspire others around the world to address this local, global and important issue. “We’re extremely proud to be a part of this incredible movement and we hope you are too.” You an find out more on the Big Sleep Out website here.

News
A no-host Oscars ceremony? Helen Mirren says it could be an ‘interesting’ situation

The biggest drama in Hollywood right now is who the heckâs going to host next monthâs Academy Awards ceremony, and the mystery has made it all the way into Helen Mirrenâs social circle. âI was talking to one of the (Oscar showâs) writers and he said, âDo you want to host?â â Mirren tells USA TODAY, followed by the kind of laugh that clearly states âNot it.â The host search has been, shall we say, tumultuous. Comedian Kevin Hart was first picked for the gig, and then quit due to some old homophobic tweets, and then looked like he might say yes again but instead reaffirmed his no. Now it looks like there wonât be an Oscar host for the first time since 1989, which Mirren says would be âinteresting.â (Hopefully it won’t be as “interesting” as that infamous 1989 Oscars dance number.) The 2007 best actress Oscar winner (for âThe Queenâ) doesnât know if a no-host Academy Awards is a good thing or a bad thing. âIt’s a thing,â Mirren says simply. âThe reason I kind of like the host is you can send it all up a bit. It means you’re not taking yourself too terribly seriously.â Winning an Oscar is a fantastic and great moment, but one that could use some perspective at the same time, adds Mirren, who stars in the upcoming HBO miniseries “Catherine the Great” (slated for later in 2019) and the big-screen thriller “The Good Liar” (in theaters Nov. 15). âEveryone knows that it’s not like the shutdown of the government â it’s not that important, if you know what I mean. And I think that the existence of the host, it’s always a comedic role, it’s there to make fun of everybody, and that’s not such a bad thing.â

According to Playbill, the 2019 Academy of Music Anniversary Concert and Ball will feature the talents of Oscar and Tony winner Helen Mirren. The stage and screen legend is set to take the stage at the January 26 event at the historic Philadelphia landmark. She will be joined by the Philadelphia Orchestra under the baton of Music Director Yannick NÃ©zet-SÃ©guin, who also recently took the reins at New Yorkâs Metropolitan Opera. âThe Academy of Music is a beacon of historic Philadelphia, and The Philadelphia Orchestraâs annual visit is a treasured moment,â said NÃ©zet-SÃ©guin. âI am thrilled to be returning next month with Helen Mirren, one of the greatest actors of our time and an artist I very much admire, for an evening of words and music to remember.â The white-tie event will begin with a pre-concert reception at the Academy of Music, followed by the concert and subsequent celebrations at the Bellevue Hotel. Concert and Ball tickets are available at TheAcademyBall.org. At the Met, NÃ©zet-SÃ©guin recently conducted the premiere of Michael Mayerâs new staging of La Traviata, marking his first time taking the podium after officially assuming the title of music director. He is also set to lead productions of PellÃ©as et MÃ©lisande and Dialogues des CarmÃ©lites later this season.