Previous
Next
Directed by: Braham Murray | Literature: Eugene O'Neill
One of O'Neill's most famous plays, "Long Day's Journey Into Night" takes place on a single day in August 1912 in the seaside Connecticut home of the Tyrones' Monte Cristo Cottage. Basded semi-autobiographical on O'Neill himself, his older brother, and their parents, the Tyrones is a family of constant battle. The story deals with the mother's addiction to morphine, the family's addiction to whiskey, the father's miserliness, the older brother's licentiousness, and younger brother's illness. Helen Mirren's debut at the Century Theatre in Manchester.
Cast: Dilys Hamlett (Mary Tyrone), Michael David (James Tyrone), Derek Fowlds (Edmond), Helen Mirren (Cathleen) 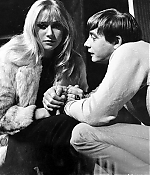 After a triumphant performance of Cleopatra at the National Youth Theatre, Helen Mirren transferred to Manchester’s Century Theatre to start her professional career. Director Braham Murray cast her as Cathleen, the maid, in O’Neill’s “Long Day’s Journey Into Night”. In his autobiography, Murray reflected on the difficult casting of the play: “The problem was the actor playing Tyrone. This is a hard part to cast in any circumstances; at an unknown theatre in Manchester it was practically impossible. An agent I knew, Barry Cross, recommended his client Michael David. His CV was impressive. He had played Horatio to Paul Scofield’s Hamlet and had been a leading man in various West End productions. What Barry had neglected to tell m was that he had become mentally ill during the break-up of his marriage and had had a lobotomy. This meant he had no worries. Rehearsals were impossible. I was reduced to standing next to him on stage and forcing him to emote, move, shout – in short to act. I think it was the last time he appeared on stage and his mental state deteriorated thereafter. Nevertheless, with Dilys Hamlett and Derek Fowlds on fine form we got away with it.”

Long Day’s Journey into Night [stood out] because it is such a great play. And I had a phenomenal actress playing the lead, and indeed Helen Mirren in her first job. As a human being all the men were just going [starts panting], ‘Where has she come from?’. And she was a fantastic actress. Yeah, she’d already done youth theatre. She’d played Cleopatra and so on, she was just one of those people who knew how to do it and didn’t have to train or anything, she just did it. I suppose that [play] was one of the pretty big ones with Century. I’ve got to remember when it stopped being Century. Yeah, I think that was the big one, The Merchant of Venice as well. That was the first Shakespeare that I did where I went ‘Oh I see,’ and ‘that’s what it’s about,’ and ‘that’s why I’m doing it. This is how I’m expressing myself.’ And I grew up a lot, working with Dilys Hamlett, and indeed James Maxwell, who were wonderful actors, and Helen Mirren. So it made a great difference. I was beginning to work with grown ups. (Braham Murray, Theater Archive Project, November 05, 2009)

Helen Mirren would perform three more plays with the Century Theatre – “The Ortolan”, “Charley’s Aunt” and “The Merchant of Venice”.

Long Day’s Journey Into Night is being listed under the following tags: Century Theatre Manchester, Eugene O'Neill, Year 1965
Back to previous page
Advertisment