Previous
Next
Directed by: Braham Murray | Literature: Michael Meyer
Michael Meyer's first play "The Ortolan" is a symbolic drama about a young poetess, Gertrud (Helen Mirren), the protÃ©gÃ©e of an older woman, Mary Louise (Dilys Hamlett), who cannot have children and seeks fulfilment in the girl's success. The first performance of the play occured in 1954 at the Oxford University Dramatic Society and the role of Gertrud was originated by Maggie Smith.
Cast: Dilys Hamlett (Mary Louise), Derek Fowlds, Helen Mirren (Gertrud) 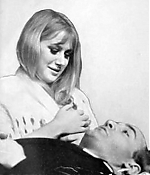