Previous
Next
Directed by: Paul Hill | Literature: David Halliwell
David Halliwell's play is set in the Sixties, an age given over to youth and rebellion: In a squalid attic flat in the the freezing darkness of a Huddersfield winter, Malcolm Scrawdyke and his fellow Northern art students smoke and rehearse their revolutionary assault upon authority. According to Malcolm, the choice is simple: "Freedom or serfdom". With the manifesto established, the "Party of Dynamic Erection" begins its surreal offensive upon the eunuchs (dunces) who stand in the way of inevitable triumph...
Cast: John Thaw, Helen Mirren 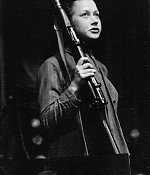 Not much is known about Helen’s appearance at the Sunderland – the only female in a five-person-play – except for the anecdote that has been often told:

Before Stratford, one of the directors at the Youth Theatre asked me to play “Little Malcolm and his Struggle Against the Eunuchs”, a typical Angry Young Man play of the sixties. As with all those plays, it was a boy’s fantasy and the girl’s role was sexist crap. However, it was a professional engagement, with a wage attached. We played it for one week at the Empire, Sunderland. The vast, echoing mausoleum of an auditorium seated around two thousand. We attracted around two hundred. The seats of the theatre were like cinema seats; they flipped noisily up if anyone stood to leave. Many people took that option, especially when I had to deliver the line “Will you shaft me?” By the end of the play there were maybe a hundred and thirty-four left in the audience. (Helen Mirren: My Life in Words and Pictures)

Little Malcolm and his Struggle Against the Eunuchs is being listed under the following tags: David Halliwell, Sunderland Empire Theatre, Year 1967
Back to previous page
Advertisment