Previous
Next
Directed by: Peter Hall | Literature: William Shakespeare | Cinematography: Jack Harris
Hermia (Helen Mirren) is in love with Lysander (David Warner) but are forbidden to marry. Together they set off into the enchanted wood to live together in happiness. Unknown to them, the couple is followed by Demetrius (Michael Jayston) who loves Hermia. Demtrius in turn is followed by Helena (Diana Rigg) for she is in love with him. Their adventures are compounded by the inhabitants of the wood. Oberon (Ian Richardson) and Titania (Judi Dench), the King and Queen of the Faeries, helped by Oberon's servant Puck (Ian Holm), cast the lovers into turmoil through their magic and their own jealousies.
Cast: Derek Godfrey (Theseus), Barbara Jefford (Hippolyta), Hugh Sullivan (Philostrate), Nicholas Selby (Egeus), David Warner (Lysander), Michael Jayston (Demetrius), Diana Rigg (Helena), Helen Mirren (Hermia), Ian Richardson (Oberon), Judi Dench (Titania), Ian Holm (Puck), Paul Rogers (Bottom), Sebastian Shaw (Quince), Bill Travers (Snout), John Normington (Flute), Clive Swift (Snug), Donald Eccles (Starveling) 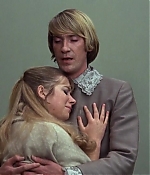 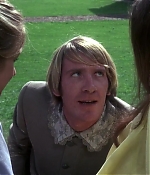 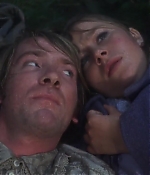 British director Peter Hall’s 1968 filmization of Shakespeare’s A Midsummer Night’s Dream, starring the Royal Shakespeare Company, is faithful to the text and to the main plot, which involves the “bewitching” of several groups of mortals by a covey of mischievous invisible fairies. So why did critics complain? Hall’s handling of Shakespeare’s prose and iambic pentameter didn’t bother the purists as much as the director’s visual choices. Hall was criticized for staging the film in a typically rainy British winter rather than the mid-Summer alluded to in the play’s title. The director responded by pointing out that the fairies, led by Oberon and Titania, were deliberately toying with the expectations and sensibilities of the Mortals – thus, it made sense to confuse the “human” characters by playing havoc with the weather. Other stylistic alterations included updating the story to the 19th century, and the near-nudity of Judi Dench as Titania. Most of the film is shot in close-up (most effectively during the soliloquies of Diana Rigg, as Helena), not so much to hide budgetary deficiencies as to play better on television.

Unquestionably one of Shakespeare’s supreme masterpieces, A Midsummer Night’s Dream may also be his single most popular play, and with good reason: it segues seamlessly from dream to reality, highbrow to lowbrow, rarefied romance to earthy slapstick, and a good production should be both intensely moving and laugh-out-loud funny. It is thought to have been written in 1595-96, probably shortly after Love’s Labour’s Lost, with which it shares a preoccupation with the nature of love and a climax in which a stage production goes disastrously wrong. It was based on a wide range of sources, including Geoffrey Chaucer’s fourteenth-century The Knight’s Tale and two classical works, Ovid’s Metamorphoses and Apuleius’s The Golden Ass.

Peter Hall’s Royal Shakespeare Company production was adapted for the big screen in 1968 and enhanced by a virtually uncut script delivered by a starry cast that included Ian Richardson (Oberon), Judi Dench (Titania), David Warner (Lysander), Diana Rigg (Helena), Helen Mirren (Hermia) and Ian Holm (Puck), with Paul Rogers’ Bottom coming in for particular praise for his decision to play the part completely straight, in stark contrast to the usual gurning buffoon. Hall’s hyperactive, New Wave-influenced direction with its rapid camera movements and jarring jump-cuts came in for much criticism, and many of the costumes betray the era in which it was filmed, but it remains one of the most authentically sensual Dreams yet committed to celluloid. The film premiered in theatres in Europe in September 1968. In the U.S., it was sold directly to television rather than playing in theatres, and premiered as a Sunday evening special, on the night of February 9, 1969. It was shown on CBS (with commercials). It received a Primetime Emmy nomination for Outstanding Dramatic Program in 1969.

Peter Hall’s screen adaptation of “A Midsummer Night’s Dream” features an amazing cast of Royal Shakespeare Company members, who are still considered among the best British actors: Judi Dench, Ian Richardson, Diana Rigg, Helen Mirren, Ian Holm. It doesn’t get much better than this. If you look beyond the fact that this version was done on a very low budget and the cinematography changes from odd to puzzling at times, it’s a faithful version of Shakespeare’s play, acted by great talents. Recommended.

A Midsummer Night’s Dream is being listed under the following tags: Theatre Adaptation, William Shakespeare, Year 1968
Back to previous page
Advertisment