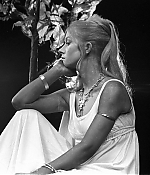 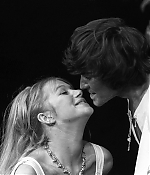 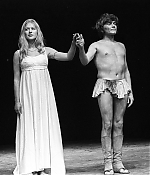 Three years after her overnight conquest as Cleopatra with the National Youth Theatre, Helen Mirren notched up her third Shakespearean lead with Cressida. The character starts as a juvenile tease, vows eternal love to Troilus, then abruptly ditches him for Diomedes when sheâs handed over to the Greeks. Make sense of that. Mirren solved it (like Wedekindâs Lulu) by throwing back whatever image the man wantsâplaymate, romantic, or sexual realist. She was like a fading coal brought back to white heat by the breath of each successive partner. As Mirren recalls in her book, “I was not really ready for this but steamed ahead anyway, helped by kind and experienced actors like Sebastian Shaw, Norman Rodway and especially Ian Richardson. Ian took me under his wing, showed me respect and taught me with generosity.”

The critics were not that generous with Barton’s production. The Sunday Times wrote, “It would be pleasant to say that Miss Mirren has actually increased her celebrity this week; but Mr Barton’s production, which presses upon the very limits of provocation, gives her no chance to do so. It is hardly too much to say that Mr Barton sees this most disputed of Shakespeare’s tragedies, not as Troilus and Cressida, but as Achilles and Perversion. There are times when the performance appears to be on the point of developing into a homosexual orgy in the midst of which poor Cressida’s physical allure and moral delinquency seem a tedious interruption of the main sensational business of the evening, which is to show Achilles as a startling kind of male whore.”

After its run at Stratford-upon-Avon and the Aldwych Theatre in 1969, “Troilus and Cressida” headed for a European tour, with stops in Switzerland, Germany and the Netherlands.

Troilus and Cressida is being listed under the following tags: The Royal Shakespeare Company, William Shakespeare, Year 1968
Back to previous page
Advertisment