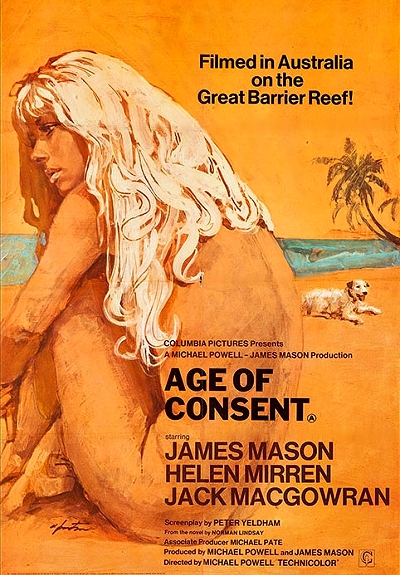 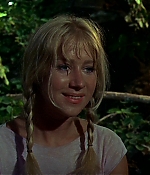 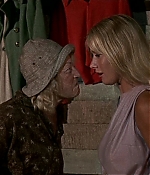 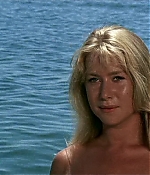 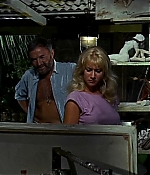 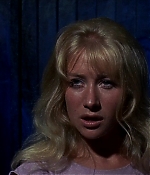 Age of Consent was based on a 1938 novel by Norman Lindsay who also worked as a political cartoonist and painter. The story, which dealt with a painter’s loss of interest in his art, might have been a thinly disguised autographical account of Lindsay’s own life but Powell connected with it and also with the idea that inspiration can spring from the most unlikely circumstances. In this case, the painter, Bradley Monahan, retreats to an isolated island to escape the commercial art world and live as a beach bum. Prior to production, Powell told an interviewer, “My next film is the story of a painter who believes that he will no longer paint and of a girl who persuades him to begin again…He will probably end up painting her; but to see a painter sit down and paint a girl, this could be exciting, but I had the hardest time explaining to my scriptwriter that this didn’t excite me at all. What interested me was the problem of Creation and the fact that this creation in the case of the painter was very physical. He will have to struggle, to fight, even more strongly than he will move away from reality. It will be a slightly bitter comedy that I will produce with James Mason who will play the leading role.” Powell had wanted to work with James Mason twenty-four years earlier on I Know Where I’m Going! (1945) but they had been unable to come to terms on salary. Now both men, entering the final stages of their film careers, seized the opportunity to make what they hoped would be their first major success in years. Mason, who was also acting as co-producer, and Powell possibly saw their film as the antithesis of Stanley Kubrick’s Lolita which Mason had starred in back in 1962; in that film, the relationship between a young girl and an older man ended in tragedy but in Age of Consent, the relationship leads to a mutually liberating experience for both parties. The film was also important for Mason in that it introduced him to his future second wife, Clarissa Kaye, who appears briefly toward the beginning in a sexual tryst with Bradley.

The filming of Age of Consent began in March of 1968 in Brisbane with additional location shooting on Dunk Island off the Queensland Coast. Interior scenes were shot at the Ajax Studios in Sydney and the budget was set at a modest 1.2 million dollars and bankrolled by Columbia Pictures’ British division. In her first major film role, Helen Mirren, a member of the Stratford-on-Avon Shakespeare company, played the part of Cora, Bradley’s muse and model, and Irish actor Jack MacGowran was cast as Bradley’s freeloading, disreputable friend Nat Kelly. In the biography James Mason: Odd Man Out, Helen Mirren recalls the making of Age of Consent: “James had seen me in a National Youth Theatre season and he and Powell decided I’d be right for the role, but once we got started Powell kept having vociferous fits of anger on the set, and James was always there for me, very gently guiding and teaching as we went along. Having survived that brutal Hollywood world he was hugely experienced on the set, and tremendously generous to me. But after we finished shooting he asked me to stay with him for a holiday in Switzerland, and I suddenly saw how terribly lonely he was and how much he needed a woman like Clarissa to look after him. It was as though he’d never had anyone really by his side or on his side before. In the film he played another loner, a man on the run from any sort of social life, and that’s really what he was, at least for as long as we were on the Barrier Reef. Back in Switzerland, he seemed altogether more sophisticated and worldly.”

That was an amazing experience, very surreal! Iâd hardly been on an airplane before doing that film, and here I was in the first class compartment of a Qantas airliner on this long plane ride to Australia. Then we filmed on this tiny island, called Dunk Island near the Great Barrier Reef. And I was running around, hardly wearing anything and working with the great James Mason, who was very kind. So it was a completely wonderful, very strange, very surreal experience. It all seems a bit like a dream now. Michael was very kind to me, although he could be a bit of a martinet to others. I was very inexperienced, so he was very patient, as was James, who sort of guided me around. (Helen Mirren, Venice Magazine, April 2006)

Mason and Powell were both hoping Age of Consent would be well received in England but the film ran into trouble with the British censors almost immediately. The opening bedroom scene between Mason and Kaye was removed as well as a nude swimming sequence with Mirren. Even if those scenes had remained intact, it is doubtful it would have made a difference to the British critics who were either negative or less than enthusiastic in their reviews. Penelope Mortimer in the Observer wrote, “I tremendously admire James Mason and believed, until I saw Age of Consent, that he could do no wrong…It is best forgiven and forgotten.” The Variety review was a slight improvement: “The film has plenty of corn, is sometimes too slow, repetitious and badly edited…Yet [it] has immense charm, and the photography and superb scenery make it a good travelog ad for the Great Barrier Reef.” Even Powell admitted there were flaws. “It wasn’t bad,” he said. “It had charm and it was well-acted. But I was disappointed by the painter. I was unable to find a painter to interpret my ideas. They had to be transposed on canvas. To show what he saw through his eyes. I had found a painter of Australian origins who had done numerous exhibitions in New York. He told me that he didn’t understand, that it was too difficult. So I was forced to treat it as a comedy. A sensual comedy. Not a big success, but interesting anyway.” Powell also pointed out a specific scene in Age of Consent that was a personal favorite and “One of the best scenes I’ve ever made in which a dog puts on its own collar. He was a wonderful dog called Geoffrey, and he had a real old sergeant major owner and a quality I can only describe as cunning. So when I told him that I wanted the dog to put on his own collar he said, “I’ll have a word with him sir.’ I kept hoping people would remember the film and say, “That’s the one in which the dog puts on his own collar” – but they never did.”

It is much easier to assess Age of Consent now than in 1969 when critics had much higher and unreasonable expectations for the director behind such masterpieces as Black Narcissus (1947) and The Red Shoes (1948). It is true that the film is very uneven in tone and quality, shifting back and forth between intimate drama and broad, raucous comedy (especially the sequences with Jack MacGowran). And a climactic death scene of one of the characters plays like a crude slapstick routine instead of the tragic resolution of a troubled relationship. Neva Carr-Glynn’s performance as Cora’s alcoholic grandmother registers as a shrill, overbearing caricature and Andonia Katsaros playing a sex-starved spinster is barely more than a cartoon figure. James Mason, on the other hand, is immensely likable and laid-back as the purposeless painter, despite an Australian accent that comes and goes. And Powell is quite correct in praising the dog Geoffrey, who as Bradley’s companion, steals every scene in which he appears. Most memorable of all is Helen Mirren who has great poise and a natural beauty that suits her uninhibited character. Never one to avoid nude scenes, Mirren has several in Age of Consent but they rarely seem exploitive and often provide a striking juxtaposition of the human form against the natural beauty of the Great Barrier Reef – the real star of the film.

âââââ
“Age of Consent”, a rather odd but enjoyable Michael Powell classic, works best when Mason and Mirren share the screen – which is funny because there is zero chemistry between them. But it doesn’t hurt the film because it never feels like a love story, rather a coming-of-age story for both Bradley and Cora. It gives James Mason a great leading role and Helen Mirren enough screen time for a breakout role so early in her career – how could an actress not break out with those full frontal scenes. Whenever the film shifts away from their unlikely bond, it loses pace. Neither the subplot of Bradley’s friends nor his affair add anything to the plot (and that although the “affair” is played by Mason’s future wife). “Age of Consent” works best with its two key players, surrounded by the film’s leading role – the Great Barrier Reef.

Age of Consent is being listed under the following tags: Comedy, Melodrama, Year 1969
Back to previous page
Advertisment