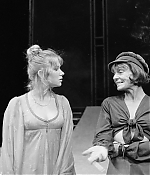 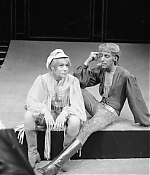 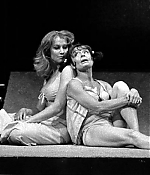 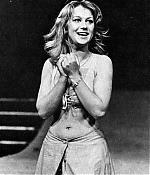 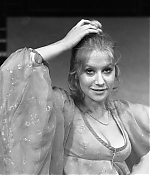 Robin Phillips presented a modern-dress production of William Shakespeare classic play. Reviewing the RSC’s version for The Times, Irving Wardle suggested that “the play deals with a specifically Elizabethan contest between love and friendshipâ and, as a result, “it appears more confused and implausible to us than it would have done to Shakespeareâs public.” Certainly it has to be taken in the context of a Renaissance debate which often privileged male friendship above the demands of heterosexuality. This is why putting the play into modern dress poses particular problems: in our culture, men who address one another as “my loving Proteus” and “sweet Valentine” are assumed to be more than good friends. The Guardian regretted the “many visual and thematic inconsistenciesâ introduced by updating the action but recognised that they were done in a âspirit of affectionâ for an immature play. Resisting the temptation to broaden the comedy too far, Phillips had acknowledged the playâs âserious purpose” in a production that was a “victory of professionalism over playfulnessâ. However, Mirren proved a stumbling block for this critic: “â¦at the moment [she] shoves and pushes too much. She seems to overact at every point and must learn to allow the audience to come to her occasionally rather than rush at them”.

The Two Gentleman of Verona is being listed under the following tags: The Royal Shakespeare Company, William Shakespeare, Year 1970
Back to previous page
Advertisment