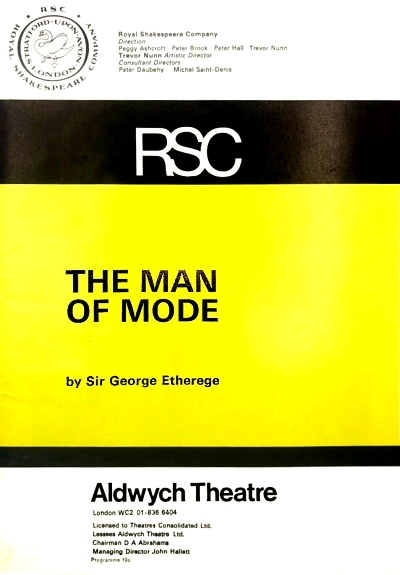 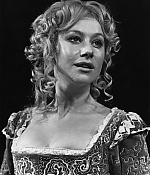 “The Man of Mode” by Sir George Etheridge was written in 1676. Ninety years later, in 1766, it vanished from the London stage. “The Man of Mode” was written during the restoration, when Charles II and his dazzling court applied the pleasure principle to all things. It was a time of total backlash against Oliver Cromwell and his Puritans and all the repressive doctrines they preached. “Gentle George” Etheridge was a pretty fair representative of the backlash. In 1664 he came out of nowhere with a play called “The Comical Revenge; or, Love in a Tub”. Samuel Pepys wrote in his diary the play pleased him not at all. It pleased the London public mightily, and Etheridge was a made man. Like most writers of Restoration comedy, he used his plays to show off his wit – and wit was the one sure entree into high society. Etheridge hit the jackpot first try, and became a favorite wit of the King himself. In some ways his career resembled a typical Restoration comedy. These plays loved the impoverished aristocrat forced to marry for money: Etheridge, his funds exhausted by riotous living, had to marry a wealthy but evil-tempered widow. The plays often extolled town (London) versus country (everywhere else) virtues; Etheridge spent years away from town in diplomatic posts abroad.

His laziness became legendary, and he diverted his friends with only three plays. In “The Man of Mode”, the last of the three, he reputedly patterned his hero on one of the Restoration’s most notorious rakes, the Earl of Rochester. This lecherous Lord once abducted a woman from her carriage in the heart of London. He died a burned-out case at 33. Dorimant, the “Rochester” figure, discards one mistress by seducing a second. All the while he is being beguiled into marriage by a country wench who is his match in wit and his infinite superior in wealth. An exaggerated dandy enlivens things with outrageous costumes and worse mannerisms, and various other characters get in the lovers’ way. For the Royal Shakespeare, director Terry Hands tackles this bit of fluff 1971 style. The clothes are modified Carnbary Street, the set a giant modernistic toy, the acting modern without attempting Restoration stylism. What results is a giant game of let’s pretend. Not one of Etheridge’s people seriously believes he is what he pretends to be. Alan Howard as the suave Dorimant, Helen Mirren as his rich country wench, Vivien Marchant playing the discarded mistress like a Hollywood has-been, all histronics and purple gowns, John Wood clowning in the dandy’s phantasmagoria – all of them are posturing, and they know it.

Helen Mirren’s Harriet, tousled amid her immaculate companions, hurtles through the action as an embodiment of rebellious natural life; never more so than when she and Terence Taplin mime a tender courtship scene for the benefit of two match-making elders. (The Times, Irving Wardle, September 14, 1971)

They are intentionally ridiculous. They are all play-acting, every one. They pretend a full pitch for their friends’ amusement, for their own – and thus for ours. We share their elaborate ruses, laughinh with them and never at them. Laughther of this sort is a rare thing. It is this, perhaps, which makes this fluffy, lightwheight, back-from-the-dead revival so delightful.

The Man of Mode is being listed under the following tags: George Etheredge, The Royal Shakespeare Company, Year 1971
Back to previous page
Advertisment