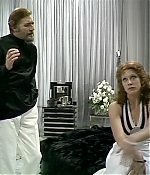 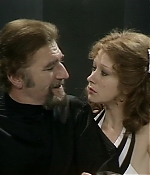 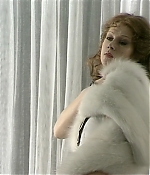 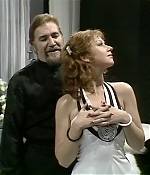 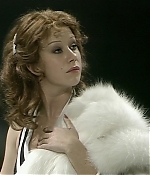 This Play for Today, subtitled A political extravaganza, was first broadcast in 1975. It contains many famous faces are still stars today, and also Peter Barkworth play in the Prime Minister, as a fond reminder of an actor who sadly died recently. This is England but not as we know it. The costumes seem like Mao chic and, except on Helen Mirren and Beryl Reid are exceptionally ugly. Tony Abbott’s design though is bright and modern with the final scene in a palace that seemingly models itself on the pyramids of the Louvre with an edifice very much like Sydney Opera House in the background. This is the setting for a debate on the nature of democracy and the monarchy but also globalisation and American hegemony. Thus, much of the discussion remains topical today, often scarily so. However, one has to stick with this one to get to the entertainment. There is quite a lot of Shavian discussion appearing through the mouthpieces of King Magnus, played appropriately with irony far more than gravitas by Nigel Davenport, and the Prime Minister.

This then expands into a Labour Cabinet that contains a series of unlikely members led by Beryl Reid and Bill Fraser. Those old enough to remember back may wonder the extent to which director Cedric Messina has modelled these on Harold Wilson’s government of the period. After an awful lot of worthy debate about the nature of government, a light shines on this play with the arrival of Helen Mirren as the arch and extremely sexy Orinthia, a narcissist so much at home in the King’s company that it takes time to realise that she is his mistress and not the wonderfully named Queen Jemima. Helen Mirren talked about this in the documentary for her BBC appearances:

I think The Apple Cart is the only Shaw I’ve ever done. And that’s quite an obscure Shaw. You have six pages of dialogue and then you go home. But I discovered what they say about great writing with Shaw. You look at this enormous long speech and I remember Orinthia like that. She comes in and she has an enormous speech and then she goes off again. And I’ve always had a terror fear of learning lines. I look at these things and go, “I’m never going to learn it. How can I possibly get all these words into my head.” [But] Shaw, you learn like that. Rather like Shakespeare, actually. So easy to learn because it’s so beautifully written. The psychological connection between one line and another are so perfect. I mean with great writing, it’s not the lines that are important. It’s what happens between the lines.”

The New York Times called this adaptation a “standout”. “Even if the costumes donât hold up – everybody looks like a Cossack or a fitness instructor – Shawâs treatise on totalitarianism does. The diatribe by the king on “the tyranny of popular opinion” remains relevant. So does Ms. Mirrenâs Orinthia, again the shrewd mistress of a famous man (in reference to “Caesar and Claretta”). The final scenes of the play first show an American ambassador offering King Magnus the opportunity to become emperor of the United States in return for hegemony and a reverse takeover of his own country. This is apparently inspired by a Corporation called Breakdowns Limited that is fast buying up not only all of its competitors but apparently the whole world. Sound familiar? The Apple Cart builds to a climax as the Prime Minister delivers an ultimatum to his King demanding that he gives up politicking once-and-for-all.

Davenport is almost feline in his delight in the role, rolling the Shavian dialogue off his tongue with an authority and playfulness that’s entirely keeping with the character. Mirren, in her celebrated “interlude” with the King, that breaks up the two main acts, isn’t as successful with her interpretation of the sexually charged, highly intelligent – and altogether too demanding – consort of the King, who incorrectly assumes he will give up everything he’s learned about being the people’s monarch, just to call her his own. Mirren is obviously trying too hard here to be sexualized and alluring and enticing, coming off often as a very naughty, very attractive, attention-seeking girl at a party, rather than a Shavian equal to her verbally sparring King. Her “defeat” is all too predictable by Davenport, because she’s so obviously overdrawn in her attempts to secure the King for herself. The production itself, which is rather straightforward in its lensing, looks quite handsome in its 1975 approximation of “modern,” although those who don’t keep the play in its proper context – forever in the future – may see this production design as a drawback.

I found “The Apple Cart” quite slow at times, surely because Helen’s character is not a part of the whole story rather than a segment, when she is visited by the King. The scene is lenghty and well played, but it doesn’t make up for the bits before and after.

The Apple Cart is being listed under the following tags: Adapted from a Play, Drama, George Bernard Shaw, Year 1975
Back to previous page
Advertisment