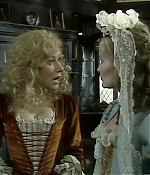 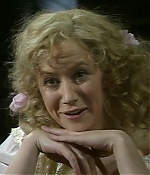 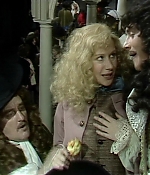 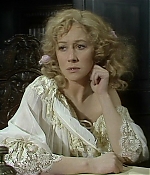 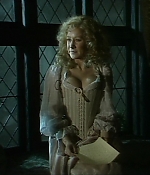 Is he an hypocrite or an eunuch? This is the key question that must be answered in William Wycherley’s Restoration Comedy about “the London disease they call love”. These days, we would call it sex. “The Country Wife” was recently revived to launch the Theatre Royal Haymarket Company, in a lacklustre production that threw doubt on the value of the play. Strangely, it works extremely well on television with Donald McWhinnie’s excellent cast helping to ensure that there are laughs throughout. It is all based on the witty conceit that the well-named Mr Horner has been emasculated. He cleverly spreads the rumour about town in an effort to inoculate himself against the jealousy of husbands. The result is that he has freedom with their wives and sisters, turning the menfolk into eager cuckolds. The most enthusiastic of the lot is the impressively jealous Bernard Cribbins as Pinchwife, so well rendered by David Haig at the Haymarket. At an advanced age, he has taken a young country wife, Margery, played by Helen Mirren with a broad West Country accent.

It’s an interesting role. She’s just sweet and innocent. I don’t love that restoration comedies. They’re funny but they’re threaded through with such cynicism and cruelty. And the women’s characters are rather cruely treated in general. Although they’re great women’s characters, but the writing is coming at them rather slightly cruel. You’re either a beautiful young innocent or you’re a cropped old bag, and there’s nothing in between.

This mixture is well stirred by Wycherley with secret letters and confused identities. He also throws in a wealthy old fool, Sir Jasper Fidget (John Nettleton). He enthusiastically offers the presumed eunuch the company not only of his wife (Adrienne Corri) but also his sister (Ann Beach) and married friend Mrs Squeamish (Coronation Street’s Amanda Barrie). This production is founded on the performances of the central trio. Helen Mirren perfectly mixes innocence with innate sexual knowledge; Anthony Andrews is a charming juggler of married ladies; and Bernard Cribbins has no trouble with a more serious comic role than one has become used to.

Wycherley’s “The Country Wife” is very reminiscent to Shakespeare, which doesn’t help a lot because Mirren’s Margery Pinchwife is as unbelievable as a young man as her Imogen was in “Cymbeline” a couple of years later. I guess this adaptation can be recommended to anyone with more interest in restoration comedy. I, for 110 minutes, had no idea what the hell was going on.

The Country Wife is being listed under the following tags: Adapted from a Play, Comedy, William Wycherley, Year 1977
Back to previous page
Advertisment