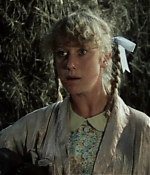 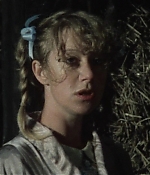 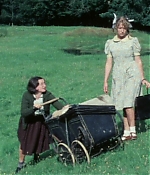 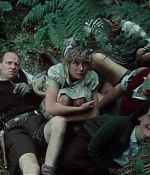 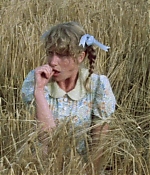 Some television drama ages badly. That does not apply to Dennis Potter’s 1979 television film Blue Remembered Hills. It is simply more brilliant, more horrifying, more extreme than ever. In a television world where drama seems to come in its own prophylactic shrink-wrap, preventing its audience being genuinely affected by what they see, and where the word “drama” means maverick cops or pathologists, Potter’s experimental classic shines out like a dangerous magnesium flame viewed close-up, without safety glasses. It is a brutal work about childhood and children. It is set in the Forest Of Dean in 1943; a place of idyllic summer beauty, marvellously photographed and shot entirely on location, on film, with no studio scenes shot on video (an important technical reason for how well the film holds up). A bunch of children are romping around endlessly, aimlessly, with children’s inexhaustible fund of energy and ingenuity – playing and fantasising about what their absent dads are doing in the war. They are nasty and bullying, ganging up on the weakest, with constantly shifting allegiances and protocols of sycophancy. They are, in their way, entirely innocent. But it is this which means that they are capable of horrifying acts of cruelty, which seem even more cruel in an age when we are obsessed with children as victims of adult predators. There are no adults present and all the children were famously played by adult actors, in silly dresses and great big grown-up male backsides in boys’ shorts. Helen Mirren remembered the rehearsals with her colleagues in the 2007 documentary for her BBC collaboration:

We were blessed with the brilliant director Brian Gibson and of course an amazing cast. We did a lot of preparation. For that you had to do a lot of research. Watching seven-year-olds and what they did was very important. To watch them in their raw natural state. We did this improvisation. It started off being mortifyingly embarrassing, I don’t like improvisation that much anyway. But within half an hour we were all completely into it and we’ve gone native, completely gone. And I remember at one point, Janine (Duvitski) and I were up in a tree, throwing things down at John and someone else. And this woman walked by and looked up and saw these two women, dressed like seven-year-olds, sitting up in a tree, throwing sticks down. It was so funny. It was brilliant”.

The title comes from A.E. Housman’s ‘Into my heart an air that kills’, a paean to lost childhood which Potter himself recites at the end of the play over images of the burning barn. This serves as an ironic counterpoint to Potter’s typically complex and ambivalent look at childhood, something also subtly reflected in Marc Wilkinson’s music score, which combines simple melodies evoking the childhood of the period (it’s set in 1943) with a dissonant underlay to suggest something more sinister. The play offers a fairly dark meditation on pre-pubescent imagination and innocence, a point emphasised through its celebrated use of well-known adult actors in the roles of young children, a technique Potter first explored in ‘Stand Up, Nigel Barton’. ‘Blue Remembered Hills’, as if to offset the very artificiality of this conceit, observes the unities of time and place very strictly, so that all the events take place over the 71 minute running time of the play in and around the Forest of Dean, never abandoning the exclusive point of view of the seven children, the only characters in the piece.

As the tormented Donald, the dour Colin Jeavons is perhaps the only one of the cast who physically fails to be entirely convincing as a young child, while the moon-faced Colin Welland and Michael Elphick are particularly well chosen. Strong religious symbolism is felt throughout, from the opening scene, in which Welland bites into an apple, through to the conclusion, when, after the accidental death of Donald, the remaining children shamefully hide in a field as if expelled from their Edenic childhood existence.

We did a read through for Dennis Potter. And we’ve been rehearsing and doing improvisations and we were into it. And finally the big day came and Dennis Potter was coming for a read through. So we were all very nervous. At a long table, Dennis Potter was sitting up at the end. And we performed it. We didn’t just read it, we really gave it. And I remember at the end of it, we all looked expectantly at Dennis, waiting for him to say, “Wow, that was fantastic. It’s going to be great. Thank you so much”. Instead there was a long, endless pause and he just looked miserable. And eventually, the producer turned to Dennis and said, “well Dennis, what do you think?” And he said, “well, at least it can get better”.

The New York Times praised Mirren’s performance. “As the pigtailed Angela, Ms. Mirren perfectly captures the officious tones of a little girl playing mother. As she brandishes a purse or soothes a doll, there is nothing overtly sexy about her. But the boys love her – and fear her. Even sucking her thumb, sheâs a bombshell.” The Daily Mail called it “simply one of the best TV drama of the past 30 years”.

“Blue Remembered Hills” is among those Helen projects you need to see at least once. Many will find it odd and strange, others still recount it among the greatest tv pieces of the 1970s. To me, it settles somewhere in between. You need some time to accept grown ups playing ten-year-olds, but once you’re over that point, it’s as enjoyable to see each actor plunging into their roles as it is disturbing to see the story unfold. Recommended.

Blue Remembered Hills is being listed under the following tags: Adapted from a Play, Dennis Potter, Drama, Year 1979
Back to previous page
Advertisment