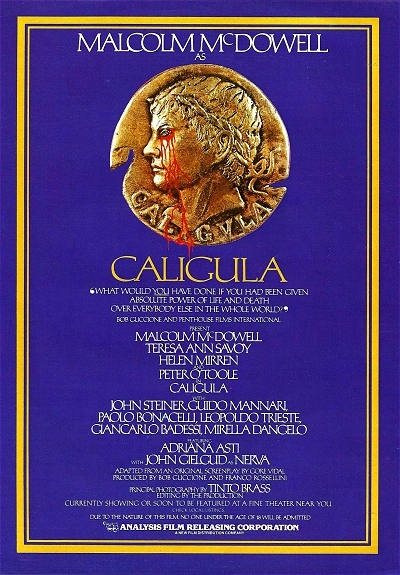 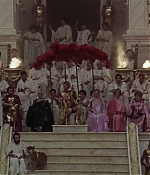 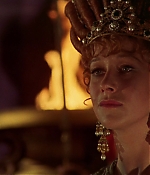 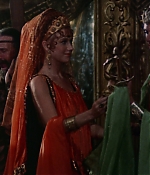 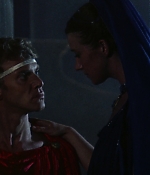 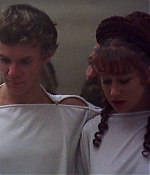 Gore Vidal developed a screenplay from Roberto Rossellini’s un-produced Caligula television mini-series. Franco Rossellini, nephew of Roberto, and Vidal’s original choice, was to create a modestly-budgeted historical drama. When the pair could not obtain financing, Vidal contacted media mogul and Penthouse founder and publisher Bob Guccione. Guccione agreed to finance the project on two conditions: that the film would be transformed into a flamboyant, luxurious spectacle akin to Hollywood’s sword-and-sandal epics of the 1950s and 1960s, and that extra sex and nudity would be added to the script in order to promote Guccione’s magazine. Vidal and Rossellini agreed and the project was launched. Renowned acting talent, including Malcolm McDowell, Helen Mirren, Peter O’Toole and Sir John Gielgud were cast. Maria Schneider was originally cast as Caligula’s doomed sister Drusilla, but later dropped out and was replaced by Teresa Ann Savoy. After Guccione was unable to come to an agreement with more established directors John Huston and Lina WertmÃ¼ller, Tinto Brass, a relatively young Italian director, was selected by Guccione to direct the film. Guccione was impressed by Brass’ previous work, which fused explicit sex with a big budget historical drama.

Caligula production was housed in Dear Studios, Rome, where Cleopatra had been filmed thirteen years earlier. From the start, Caligula was plagued by difficulties. According to Guccione, Vidal started trouble with a Time magazine interview in which he called directors “parasites living off writers”, and that the director need only follow the directions provided by the author of the screenplay. According to Guccione, an enraged Brass responded to Vidal’s comments by throwing Vidal out of the studio. Guccione was forced to side with Brass because “Gore’s work was basically done and Tinto’s work was about to begin.” Uncomfortable with the sex and nudity in the script, the female lead Schneider quickly resigned from the film. Brass was similarly unhappy with Vidal’s script. “It was the work of an aging arteriosclerotic. Vidal redid it five times, but it was still absurd.” With the help of McDowell, Brass rewrote some of the screenplay. By the time principal photography on Caligula was completed, Vidal was concerned about being associated with such an out-of-control production. Fearing the film would turn out incoherent, Vidal distanced himself from the project. As the film entered post-production, Guccione took control of the film footage and fired Brass. He hired friend Giancarlo Lui to re-edit the film. Lui was instructed to refashion the film into something more in keeping with what Vidal had first scripted, while delivering the sexual content demanded by Guccione. In their most controversial move, the pair shot extra scenes of hardcore sexual material which would be used to replace scenes shot by Brass. In the unpleasant aftermath, both Brass and Vidal launched independent tirades against the film and lawsuits against Guccione, delaying the release of the film. Vidal, who was paid $200,000 for his script, agreed to drop his contractual claim for 10% of the film profits in exchange for having his name removed from the title of the film (original billing was to have been Gore Vidal’s Caligula).

It was a trip. It was like being on a little non-stop acid trip actually doing “Caligula”. It was so fantastical and weird and it was an absolutely extraordinary experience. It’s a wild ride but it’s got certainly an energy and a character of itself. But its not consistent at all because it was Cuccione’s idea of making high class porn. And as far as I understand he cut in hardcore bits which I haven’t seen. I haven’t seen the Guccione version. I don’t think it [damaged my career], I felt very secure and happy because I was still thinking of myself as a theatre actress anyway, I thought it was just a little bit of extra spice. (Helen Mirren, Hollywood Greats 2007)

In late 1979, three years after production began, Caligula made its debut to disastrous reviews. Roger Ebert gave it a rare zero stars rating, calling it “sickening, utterly worthless, shameful trash”, criticizing not only the film’s vulgarity in its depiction of sex and violence, but also its technically incompetent direction and structure. Time Out London called the film “a dreary shambles”. Many of the actors, including John Gielgud and Peter O’Toole, distanced themselves from the production, stating they were unaware of the hardcore scenes added later to the film.

What can be said about “Caligula” that hasn’t been said before. It’s a dreadful waste of talent, money and celluloid. Some may think that it can’t be that bad, given the fact that it’s dated and that sex plays such a prominent role in today’s television. But “Caligula” still stuns with degrading scenes of violence and porn. Whatever level it has tried to reach, it fails miserably. The “acting scenes” are boring and feel out of context. With a cast like O’Toole, Guilgud, Mirren and McDowell, you believe everyone who states he was tricked into this film. At least Mirren has been a good sport, stating that the film allowed her to pay the rent and buy a car. If there’s a film I wouldn’t recommend to anybody, it was “Caligula”.

Caligula is being listed under the following tags: Experimental, History, Year 1979
Back to previous page
Advertisment