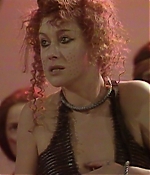 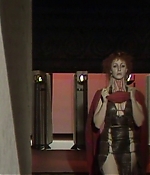 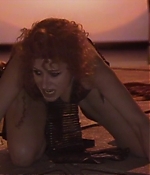 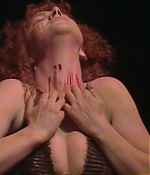 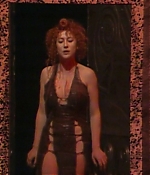 In 1979, the BBC produced this three-part television adaptation of Aeschylus’ “Oresteia” trilogy (translated by Frederic Raphael and Kenneth McLeish). It was was broadcast in three weekly instalments as “Agamemnon”, “Grave Gifts” (the production”s title for “Choephoroi”, the play also known as “Libation Bearers”) and “Furies” (the production”s title for “Eumenides”). “The Serpent Son features” an impressive castâthe lead roles were played by Diana Rigg, Denis Quilley, Helen Mirren, Anton Lesser and Claire Bloom. Helen Mirren plays Kassandra as an amalgam of RÃ©gine, Kate Bush and Carmen Miranda. In a punk hairstyle the colour of raw carrots and frock left open all down one side so as to feature a flying panel of her own skin, she did a preparatory rhumba around the set before laying her prophecies on the populace. “Now do you get it?” she hissed, but she was too late. Klytemnestra had persuaded Agamemnon to peel down to his gamma-fronts and take a bath.

One viewer wrote in to the Radio Times to say why the production hadn”t worked for him. His letter, which appeared under the header “Sci-fi Aeschylus”, suggested that, although the ideas in Aeschylus may be “complex and alien”, “tragedy isn”t sci-fi”: “the small screen”, he commented, “is for events that can be imagined happening in people”s homes, in real places. You can make Agamemnon work on TV if it looks like something that could actually have happened” (Arthur Pritchard of Wakefield”s letter published in the Radio Times, 7 April 1979, p.79). Several other letters from viewers were published alongside. One Gladys Hall of Pagham, Sussex objected that “the ridiculous and extravagant costumes [â¦] turned it into a farce. Why not the simple and graceful costumes of Ancient Greece?” On the same Letters page the producer Richard Broke was given a chance to respond to his viewer-critics, and to criticisms of the “inauthenticity” of set and costume he points out that Aeschylus” drew his characters from myths and legends in the far distant past. Other viewers were more positive about the production”s merits: R. S. Stanier of Oxford thought it “one of the most adequate English versions of a Greek plays I have ever seen”, while Helen Tullberg of Monmouth was full of praise, saying that “The standard of adaptation, production and acting have all been amazingly high and I felt the plays come to life as never before”.

One of the most striking things about this production is the use of decorative borders around the moving image (probably the work of Joanna Bill who was credited with Graphics). In Agamemnon they seemed to be used at three kinds of moment: first, to frame flashback sequences; secondly, to show action which occurs inside-the-palace when the chorus are outside; and, third, to highlight particularly important lines in the text or images on the screen. (See the adjacent image of the moment when Klytemnestra kisses the sword she has used to murder Agamemnon and Kassandra, within a blue-ish marbled frame.) The use of these borders gets more daring as the trilogy progresses: they become mobile, framing the action and closing in on particular aspects of itâand not always simply mirroring the rectangular dimensions of the screen. “I”m fed up with the shape of the screen”, said the director Bill Hays in a Time Out interview, “and everyone”s reliance on endless close-ups. So I”ve tried to alter that, focussing the audience”s attention in different ways” (quoted in Clive Hodgson and John Wyver, “Classics for Pleasure”, Time Out, 2 March 1979).

The Serpent Son: Agamemnon is being listed under the following tags: Adapted from a Play, Aeschylus, Drama, Year 1979
Back to previous page
Advertisment