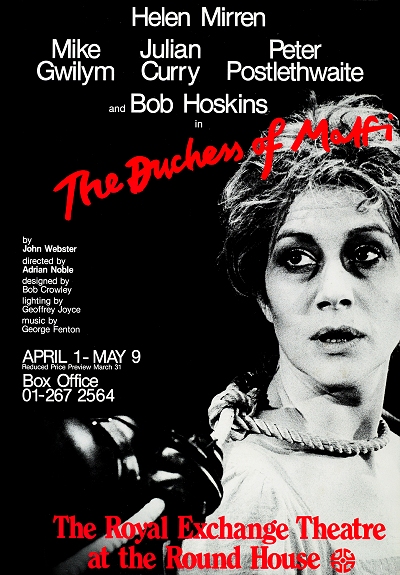 The Duchess of Malfi is one of the great Jacobean plays, written by John Webster in 1612-13, the tragedy of a powerful family rent by lust and betrayal. When the widowed Duchess (Helen Mirren) marries her steward Antonio, the choice challenges the accepted social order and established lines of power. It also brings her into direct conflict with her powerful brothers, the Duke Ferdinand and the scheming Cardinal, and tragedy ensues. The dark tale is enhanced by dark music written especially for the play.
Cast: Helen Mirren (The Duchess), Mike Gwilym (Ferdinand), Bob Hoskins (Bosola), Pete Postlethwaite (Antonio) 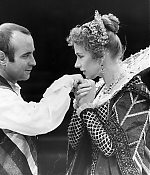 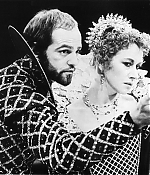 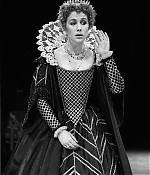 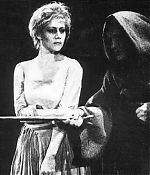 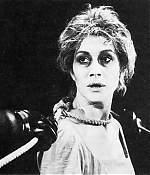 Adrian Nobleâs production, which opened in Manchester, was widely praised. The Guardian relished Mirrenâs âpassionate playing of the Duchess, all graceful lechery and looks of such intensity that they could not only kill but, in all probability, raise the dead as wellâ¦ Marrying beneath yourself is not the sort of thing, these days, that would get you murdered by your brothers, even if they had got their eyes on your property.â But it happens âin this twitching world of Websterâs where everything is enhanced and heightened to a morbid degree. And the staging is so intense and the playing so powerfulâ¦ that it actually seems not only credible but also natural, inevitable that people should carry on in this bizarre way.â The Observer noted that the production âseems to owe little to currently approved trends, since it is neither puritanically simple nor outrageously ornateâ¦ (Its) final achievement is that it duplicates the precarious balancing of Websterâs forces, admitting a fascination in cruelty, but never wallowing in it.â

When the production transferred to London, doubts set in about the later scenes, but The Times critic remained enthusiastic: There are passages in the torment scenes when Helen Mirren lapses into a dull intensity that taxes the attention, but the whole shape of the performance, from the joyous games to the willing embrace of death, constructs an image of nobility with authentic human materials… The Duchess is more than usually isolated as the only figure combining virtue and power.

Helen is a stunning actress and exceptional lady. She has always had wonderful ability and can switch from cold to ranging, invincible to vulnerable, her emotional palette and range are extraordinary and it was a joy to play her Antonio (Pete Postlewhaite, A Spectacle of Dust: The Autobiography)

As Helen Mirren remembered in an interview with the Herald Scotland in October 2007, one night, while playing the lead in “The Duchess Of Malfi”, 20 minutes before the production began, her mother phoned to say that her father had died. Mirren fell to the floor in shock and grief and yet, incredibly, went ahead with the evening’s performance. “I spent the whole play in tears,” she says. “I walked on stage and was weeping from the beginning to the end, and I went through it like an automaton. Because to act you have to get yourself out of your own mind and into this imaginative world, and I felt that to do that was a terrible betrayal of my father. I just didn’t want to forget him. It was a strange, strange feeling and to this day I think that it was a betrayal to even attempt to act.”

1981   Variety Club Award as Stage Actress of the Year (winner)

The Duchess of Malfi is being listed under the following tags: John Webster, The Roundhouse, The Royal Exchange Theatre, Year 1980, Year 1981
Back to previous page
Advertisment