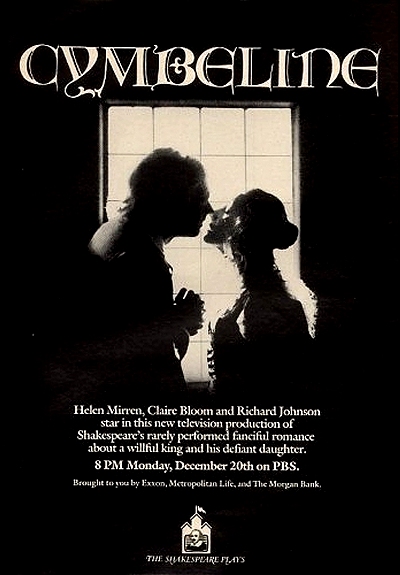 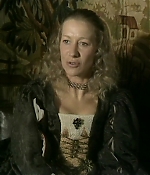 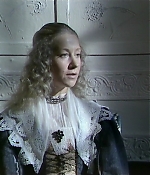 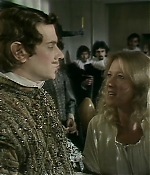 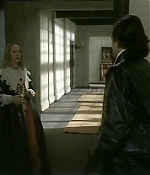 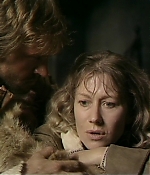 An exemplary production of a difficult play, Elijah Moshinsky’s Cymbeline develops the unusually elaborate visual and conceptual stylings that he introduced with All’s Well That Ends Well and A Midsummer Night’s Dream. Ignoring the ancient British time-period specified by the text – wisely, as there’s no evidence that Shakespeare was remotely interested in historical realism – Moshinsky turned once again to Dutch painters for inspiration, this time favouring Rembrandt for his ability to blend the realistic and the allegorical. The exteriors are shrouded in snow, and there are occasional cutaways to images of birds. A very strong cast includes what by then were BBC Shakespeare veterans: Claire Bloom, Paul Jesson, Robert Lindsay, Helen Mirren and Michael Hordern, who makes a spectacular appearance as Jupiter in one of the play’s more fantastical moments. Bloom does a particularly impressive job of fleshing out the queen, who in Shakespeare’s original is so thinly sketched that she doesn’t even have a name, while Lindsay’s symbolic rape of Imogen as she lies sleeping in her bedchamber is authentically creepy, not least for the way he is so obviously taking his time, relishing every second.

Mirren had already played the cross-dressing Rosalind in As You Like It, so was right at home here in a rather more intense role as the wronged, ultimately banished Imogen. Jesson has the most entertaining role, playing Cloten as a man who genuinely believes in his divine right to rule, though hampered by a prominent speech impediment that renders his more pompous pronouncements faintly ridiculous. As for the two other major roles, Michael Pennington makes a brave stab at turning the essentially contradictory Posthumus into a convincingly rounded character, while Richard Johnson turns the surprisingly small title role into another study of a world-weary authority figure along the lines of his Antony in Trevor Nunn’s Antony and Cleopatra. As with many of Moshinsky’s productions, script editor David Snodin was asked to make a number of changes to the original text, partly to streamline one of Shakespeare’s more complex narratives (there is a great deal of intercutting between scenes), but also to intensify the emotional impact without what was felt to be unnecessary distraction – the later scenes in Wales underwent the most trimming. The end result was widely praised as one of the most wholly successful BBC Television Shakespeare adaptations.

Of the three Shakespeare adaptations that Helen did for the BBC – As You Like It, A Midsummer Night’s Dream and Cymbeline – I find this one the most interesting. Probably because Imogen is the most interesting role compared to Helen’s performances in the other two productions. Wit a running time of almost 3 hours, you need to invest some time for this one, but it’s worth for Helen’s magnificent performance. Recommended.

Cymbeline is being listed under the following tags: Adapted from a Play, Drama, William Shakespeare, Year 1982
Back to previous page
Advertisment