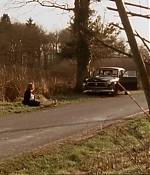 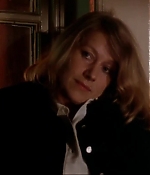 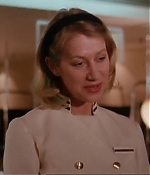 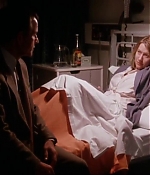 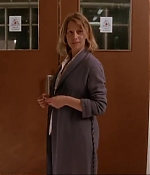 “Soft Target” is Stephen Poliakoff’s entertaining and sumptuously bizarre look at upper-middle-class English life, seen through the eyes of a minor Soviet official. Living quietly by himself in a west London compound with other Russian journalists and civil servants, his rather humdrum life of typing up Time Out-style articles for the Soviet press, with a side-line in posting videotapes of British TV to Russian broadcasters made from the twin VCRs in his flat, is livened up with a hefty dose of Cold War paranoia. The theme of Cold War attracted Mirren to play in this “Play for Today” adaptation.

I think “Soft Targets” did appeal to me because of its Russian connection. It’s very much of the Cold War era. I had been in Russia on theatre tour once by then in the late 1960s. And that sense of paranoia, of being followed, of being recorded, that’s what “Soft Targets” is very much about, was very real to me. And I knew that Stephen (Poliakoff) was talking about a real thing, it wasn’t fantasy. And I thought the way he wrote it was very believable. I thought the piece was wonderful. My role was not particularly interesting within the piece. But often I’d do something not for the role but for the piece, because I love the piece. And this one was a case in point. I’m a great admirer of Poliakoff’s work, I loved a lot of his work in the theatre in particular. And he does come back often to the Russian theme.

Mirren also praises her co-star Ian Holm, with whom she has worked numerous times, before in “A Midsummer Night’s Dream” and “S.O.S. Titanic” and later in “The Madness of King George”. “I actually worked with Ian many years ago in the RSC. He played Romeo, when I played a court lady. I didn’t exactly work with him, I worked in the background of him. I was a bit of the set dressing really. But I watched him work as Romeo, and that’s a very difficult role. He’s a great actor. And I think his natural habitat is the screen. There’s not a lot of great British theatre actors whose natural habitat is the screen but I do feel that’s the case with Ian.

Of all the BBC adaptations I was the least interested in “Soft Targets”, surely because due to lack of interest in Cold War themes. But it turns out to be one of the most enjoyable adaptations of the lot. The first reason for this is Ian Holm, who shines in a great leading role. Having seen Holm in a dozen of supporting film roles, it was a nice change to see him lead a story. Helen is equally good as the mysterious woman, although her role doesn’t offer that much. But much like “Caesar and Claretta”, here are two great actors at work. Recommended.

Soft Targets is being listed under the following tags: Adapted from a Play, Drama, Stephen Poliakoff, Year 1982
Back to previous page
Advertisment