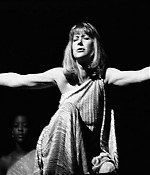 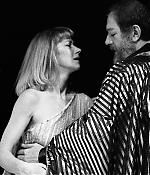 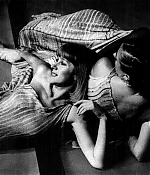 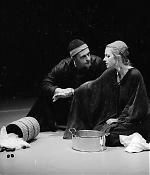 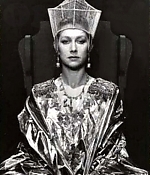 Helen Mirren, returning to a role she had first attempted at the age of 20 at the National Youth Theatre in 1965, was a bare-footed and bewitching Cleopatra, who for some was quite “hauntingly reminiscent of Peggy Ashcroft in appeance and delivery.” Mirren excelled in displaying the queen’s vitality, passion and dignity. Following Antony’s death, her Cleopatra appeared dressed all black with Antony’s blood-stained cloak for about her shoulders, her pale face besmirched with ashes and dirt in mourning for her dead lover – a striking effect against the stark black background of the stage. In her final appearance she washed away the grime and prepared herself to meet Antony in a scene that was majestic and serence: “What Ms. Mirren accomplishes better than anyone I have seen is the character’s transition to marble constancy after Antony’s death, you feel this Cleopatra lives like a woman but dies like a queen.” (The Guardian). Michael Gambon’s ‘shambling bear’ of an Antony, was an ‘ageing man from a passionate race, still hungry for passion and aware that time was running out.’ This awareness made him abrupt, moody and impulsive as his Queen. He effectively portrayed Antony’s dualty and his volatility matched Cleopatra’s.

The great value of producing Antony and Cleopatra in a studio venue such as The Other Place is not merely the fact that the space is too small to accommodate surplus purple galleys, Roman chariots and milk-white steeds, but because this space demands that the director reassess his or her perception of the play iself and develop a concise and unaffected method of presentation. This in turn creates a new encounter with the text for the spectator. Some have argued that Noble’s production of “Antony and Cleopatra” was ‘possibly truer to the original’ than other more epic productions. The basis for this claim comes from theories about Elizbethan stage practices and Shakespeare’s dramaturgy, not solely from the fact that Noble’s production lacked ‘Tadema-like excesses in bathroom marble’

Antony and Cleopatra is being listed under the following tags: Queens, The Royal Shakespeare Company, William Shakespeare, Year 1983
Back to previous page
Advertisment