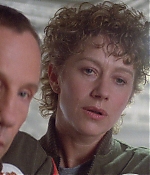 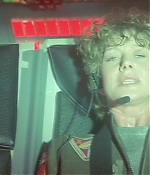 In 1984, Helen Mirren was shooting her very first Hollywood movie. It was a bold move for an actress turning 39 – an age where most Hollywood actresses struggle – or resign – to find quality jobs. Helen’s first project wasn’t a role to die for, either, but it was a start. “The script was somewhat incomprehensible to me and the role was not the best. The story was, however, prescient in that it foretold the joint America-Russian missions into space that happened after the collapse of communism, although it did not foresee that collapse.” Peter Hyams cast her as a Russian spaceship captain in the sequel of Stanley Kubrick’s classic “2001”. Based on Arthur C. Clarke’s novel, “2010: The Year We Make Contact” follows the joint American-Soviet expedition is sent to Jupiter to discover what went wrong with the U.S.S. Discovery against a backdrop of growing global tensions. Among the mysteries the expedition must explain are the appearance of a huge black monolith in Jupiter’s orbit and the fate of H.A.L., the Discovery’s sentient computer. For Helen, Hollywood was the dream she had dreamt ever since she wanted to become an actress as a child. The film starred Roy Scheider and John Lithgow, with supporting roles performed by Bob Balaban and 2001’s original cast member Keir Dullea. Helen befriended with Balaban and credits him to this day for the most valid acting advice she has received from another actor. He said, “Ultimately, you canât really control where the arrow lands. All you can do is aim it as best as you possibly can. Let go of the arrow and it will land where it lands. You canât control that and you just have to accept that.”

I had to learn that Americans did not go in for the kind of theatrical swearing I was used to. There is one word in particular which is absolutely the pits in America. No word is worse. Whereas in the theatrical culture I’d come from it’s almost a term of endearment. I learned how appalling it is to utter this word on set one day. Roy Scheider was joking around and said something on my close-up to make me laugh. I did and the director called ‘Cut’. As an amused throwaway, I turned to Roy and said, ‘Oh Roy, you cunt’. The whole studio froze in horror. Roy looked utterly shocked. He forgave, I hope. Later I tried to explain to him the disgusting nature of Luvvie Lingo in Britain.

Upon its theatrical release in November 1984, critics mostly panned the film in comparison to Kubrick’s masterpiece. The special effects, however, were praised. Although computer-generated imagery (or CGI) was still in an early phase of development in 1984, the special effects team of 2010 used CGI to create the dynamic-looking cloudy atmosphere of the planet Jupiter, as well as the swarm of monoliths that engulf the planet and turn it into a Sun for the planet Europa. Roger Ebert gave 2010 three stars out of four, writing that it “doesn’t match the poetry and the mystery of the original film” and “has an ending that is infuriating, not only in its simplicity, but in its inadequacy to fulfill the sense of anticipation, the sense of wonder we felt at the end of 2001. And yet the truth must be told: This is a good movie.”. The New York Times mentioned Helen in their mixed review for the film. “The cast is a good one, although everyone is upstaged by the fancy hardware. Mr. Scheider and Miss Mirren, fine actors both, do exactly what’s required of them, which mostly means being strong and stoic. “2010” is without wit, which is not to say that it is witless. A lot of care has gone into it, but it has no satirical substructure to match that of the Kubrick film, and which was eventually responsible for that film’s continuing popularity. However, “2010” received five Academy Award nominations in the categories of Best Art Direction, Costume Design, Visual Effects, Makeup and Best Sound.

“2010” surely is no fan favorite for its genre and lack of character for Helen. Her Russian roots certainly help for the character of Tanya, but while its a nice turn to have a female captain of a Russian spaceship, it’s a throwaway role. Mirren barely gets anything to do with the part except to listen to all the men in the room, or to look terrified while being shaken in a chair. In all fairness, this was her first steps in Hollywood and “2010” was treated a major production back then, so no hard feelings for taking the part. Also, the film is not as bad as many have reviewed it back then. If you accept that it’s science fiction and a sequel to a masterpiece, it’s entertaining and it has some good actors with John Lithgow and Bob Balaban (who would become a good friend to Helen and a co-star once again in “Gosford Park”). But if you looke for some great acting or a fantastic story, you need to look for something else.

2010: The Year We Make Contact is being listed under the following tags: Science Fiction, Sequel, Year 1984
Back to previous page
Advertisment