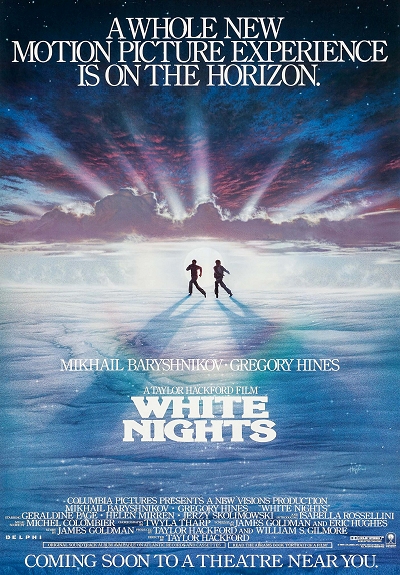 Russian Ballet dancer Nikolai (Mikhail Baryshnikov) has defected to the West, when an airplane malfunction forces a landing in Russia. The KGB tells everyone that his injuries are so severe that he has to remain confide for a while. But in reality they want him to return, so they bring him to his old apartment and an American, Raymond (Gregory Hines), who himself defected to Russia several years ago, is placed there to keep an eye on him. However, Nikolai is not about to give in and is determined to escape. And even Raymond is started to be disillusioned with Russia, and he has to decide if he is going to help Nikolai.
Cast: Mikhail Baryshnikov (Nikolai 'Kolya' Rodchenko), Gregory Hines (Raymond Greenwood), Jerzy Skolimowski (Colonel Chaiko), Helen Mirren (Galina Ivanova), Geraldine Page (Anne Wyatt), Isabella Rossellini (Darya Greenwood), John Glover (Wynn Scott), Stefan Gryff (Captain Kirigin), William Hootkins (Chuck Malarek), Shane Rimmer (Ambassador Larry Smith), Florence Faure (Ballerina) 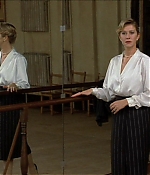 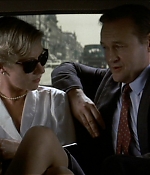 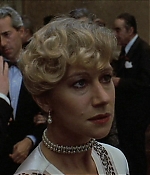 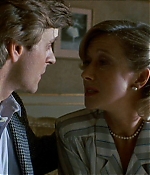 After her Hollywood debut in “2010: The Year We Make Contact” failed at the box office and a string of television appearances didn’t make much of a difference for her career’s direction, things would change when Helen received the script for “White Nights”. “The role was ok. Head of the Kirov Ballet, someone who worked within the system. I took exception to certain elements in the script, which I thought reflected too closely American paranoia about Soviet Russia.” But Mirren was not content with the process of auditioning in Los Angeles, which she has called “intimidating and humiliating”. And she was not impressed with the film’s director, Taylor Hackford, who was late for their meeting. Although quite impressed with Mikhael Barishnikov, who read a scene with Mirern, it wasn’t until Hackford told her that she had seen her before, when Helen was performing with Teatro Campesino, as part of Peter Brook’s Conference of the Birds. “There and then I knew I was not dealing with the normal kind of Hollywood film director”. In “White Nights,” Mikhail Baryshnikov plays Nikolai Rodchenko, a Russian ballet star who, after having defected eight years earlier, suddenly finds himself back in the Soviet Union when the 747 jet carrying him from an engagement in Paris to one in Tokyo accidentally crash-lands at a top-secret base in Siberia. Helen Mirren plays the head of the Kirov Theatre, a powerful woman in the Russian cultural scene, who was Rodchenko’s girlfriend back when both were dancers at the Kirov. Rounding out the cast were Gregory Hines as a tap-dance who is forced to spy on Rodchenko, Isabella Rossellini in her first film performance as Hines’ girlfriend and Geraldine Page as Rodchenko’s American agent.

Helen came in for a read and I would say the reading was not exactly what I would call ‘love at first sight’ (laughs) because Helen was sitting in the office and she was steaming. She would come on time and we were late. And she really had an attitude of disdain, let’s call it. Cut to the chase I cast her in the movie and while we were working on ‘White Nights’ there was inevitably an attraction. Of course, we both had trepidations about violating that professional line, but sometimes it’s too powerful and in this instance it wasn’t fleeting. (Taylor Hackford, Hollywood Greats)

In preparation for the part, Helen flew to Leningrad for a few days and spoke to a couple in London which fled Russia years before. It was her second time in Russia after Brook’s theatrical tour. “The first time I couldn’t separate what I was used to, the extent to which I was already dependent on the things that I thought that I despised in England, like the commercialism and hamburger joints and orange plastic. Just the crassness of consumptive society, I always thought I hated. Until I went to Russia. And I suddenly realised that I was sort of addicted to it. And I missed those beautiful big billboards advertising Marlboro cigarettes. The color of Western society, I missed desperately. However, the second time around I was there for much less time, I tried to look beyond that, into the faces of people and into the hearts of people”. For exterior scenes, a team of travelogue filmmakers from Finland, who previously had done work in the Soviet Union, were hired to film a number of locations in Leningrad, such as the Kirov Theatre and the Lenin monument, as well as a Chaika state-limousine. These scenes were then inserted into the movie. Helen was given the opportunity to actually visit the Kirov Theatre. “Taylor organized that I could go to Russia. And I had a rather extraordinary experience. I was taken, in great secrecy, backstage to the Kirov, through contacts that I had made, and that was an amazing sort of research tour.” Helen’s role only had a few scenes in the film opposite Baryshnikov, playing his one-time lover before he fled the country. But she certainly left an impression on Hackford, as the two fell in love during the shooting of the film.

I’ve never ever, before that, ever had a relationship with a director. It was a complete no-no for me, you just don’t go there, it’s not a good idea. It just had to be with Taylor and I, so it was inevitable. I never wanted to get married, and Taylor been married twice before, so I think he’d sort of had, you know, ‘maybe let’s not go there’. And I didn’t want to get married, I never wanted to get married. Marriage wasn’t my cup of tea. I couldn’t see the point. I still can’t quite see the point, except I do love being married, no question. (Helen Mirren, Hollywood Greats)

“White Nights” released US theaters on November 22, 1985 to mixed reviews. The New York Times critizised a missing chemistry between Barishnikov and Gregory Hines. “Nothing about the two defectors’ growing friendship and mutual respect is believable, though it could, theoretically, be plausible. Further, the narrative is so loosely organized that after the film has been under way for an hour, you’re still waiting for it to start.” However, they praised the supporting performances by Mirren and Geraldine Page. “That fine English actress Helen Mirren appears as Nikolai’s former lover and co-star, whose career in the Soviet Union was almost wrecked by Nikolai’s defection.” “White Nights” might be best remembered for its music, especially “Say You, Say Me” by Lionel Richie, who won the Academy Award for Best Original Song in 1986.

“White Nights” is a film of surprises. The first and biggest surprise – for me – was that a film about dancing could be interesting, even entertaining. It’s the first and probably last film about ballet that I’ve seen. But, of course, this is only on the surface. The film sheds light on Russia’s darker side, reflects Mikhail Baryshnikov’s own life story (he defected from Russia in 1974), has grim elements of betrayal and wonderful elements of friendship. And quite an inspired casting. Baryshnikov – an Oscar nominee for 1977’s “The Turnig Point” – and Gregory Hines make an odd couple in life but a dream team in dance. There are Isabella Rosselini in her motion picture debut and the great Geraldine Page in one of her last films. And there’s Helen Mirren, stunningly beautiful as Baryshnikov’s former flame, who portays the other side of Russia – those who want to feel free but choose to stay. “White Nights” is recommended to everybody who enjoys good acting – those who enjoy dancing and evergreens from Phil Collins and Lionel Richie are in for a treat.