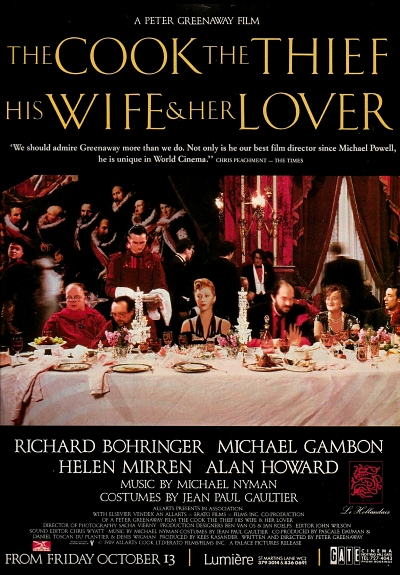 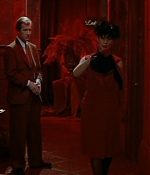 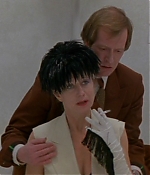 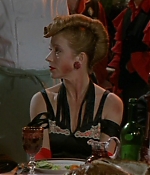 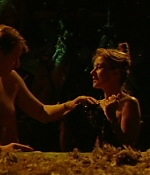 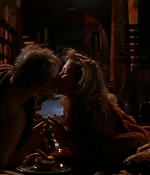 For Peter Greenaway, “The Cook the Thief his Wife and her Lover” is a passionate and angry dissertation on the rich, vulgarian, Philistine, anti-intellectual stance of the cultural situation in Great Britain during Margaret Thatcher’s premiership, whom Greenaway calls “the woman who is raping the country, destroying the welfare state, the health system, mucking up the educational system and creating havoc everywhere. There’s a lull in the film where the thief says to the lover who is reading ‘Does this book make money?’ That line really sums up this theme.” He also admits that his film, with its “melodrama” of good vs. evil, its emotive “acting” and the powerful feelings we are expected to have about its characters, is the closest thing he has made to a “traditional Hollywood” film – a remarkable fact considering that Greenaway more typically defines his filmmaking practice against Hollywood norms. “I wanted to create deliberately, almost in a technical way, a character of great evil, who had no redeeming features. European literature and all Western cinema have been full of evil parts. But there’s always this sneaking feeling when evil comes along, in the Richard III sense, that it is something to be secretly admired or envied or is fascinating. I wanted to create a character so totally evil that you couldn’t even love to hate him.” To distance his character from the moral complexity of common humanity, Michael Gambon exaggerates his portrayal of Spica the Thief to the point of caricature. As Greenaway notes, “It’s a man doing a virtuoso performance, metamorphosing through all the various permutations of evil.”

Greenaway wrote the script with the actors names he had in mind for the roles (in the end, only one of his first choices, Richard Bohringer, was cast as the cook). Albert was supposed to be Albert Finney, but he turned it down flat. Michael, the lover, was meant to be Michael Gambon, and Georgina was going to be Georgina Hale. When Greenaway asked Michael Gambon to read the script, he became fascinated by Albert instead, and asked to play him. Georgina Hale was unavailable, so Greenaway signed Vanessa Redgrave to play the wife, but later she had to withdraw because of theatrical commitments and her son’s automobile accident in Rome. He then approached Helen Mirren, whom he calls “the high priestess of stage and screen erotica.” Mirren had been offered to play Isabella Rosselini’s role in “Blue Velvet”, but she had turned it down. She eagerly accepted Greenaway’s offer to redeem herself for “chickening out” of David Lynch’s picture. Greenaway says, “Looking back, I can’t imagine anyone else in the part, but that’s always the way, isn’t it?”

Peter Greenway directs like a painter. When that film came it was a big success when it came out in New York. And for a while, any restaurant in New York I could get a table like that (snips). Anyone who worked in the restaurant industry loved that movie. We all know we were doing something really a bit far out, a bit excessive and we all knew therefore that we were the type of people who would sign up to doing something like that. I’ve never laughed so much as I did on that film. I just couldn’t wait to get on the set, taking my clothes off and laugh. (Helen Mirren, Hollywood Greats, 2007)

The story of lust, betrayal and murder became a visual feast with its use of set design, color changes, a haunting score by Michael Nyman and costumes made exclusively by Jean-Paul Gaultier. And yet, the physical and psychological violence of Albert Spica sat enthroned above of all. The film featured everything from cannibalism, full frontal nudity, verbal abuse and punches in the stomach to a thug being fed with dog feces – in short, “The Cook the Thief his Wife and her Lover” was denied an R rating by the Motion Picture Code and Ratings Administration. Helen Mirren took a flight to argue that she had not made a dirty movie. “I told the board they absolutely could not legitimately criticize this film on its artistic merit,” she said. “It may be pretentious, or boring, or whatever they want to say about it, but they can’t deny where its heart is.” They could, and denied the appeal. “The whole R rating depends on a strange sort of fantasy land,” she said, “where all adults are responsible people, and children only ever go to the cinema with their parents. They don’t go with babysitters or older brothers, or with the local drug dealer. It’s this lovely sort of apple pie fantasy America, that not only doesn’t exist in America, it doesn’t exist anywhere.” Miramax ultimately went with the unrated option, and included a conspicuous “For adults only” warning in the advertising campaign – calling it “the most controversial film of the decade”.

Despite its unrated status, the film grossed a good $ 7 million in the theaters and divided the critics just like its audience – the better reviews coming from the New York Times, calling it “so intelligent and powerful that it evokes our best emotions and least civil impulses, so esthetically brilliant that it expands the boundaries of film itself” and calling Helen Mirren “astonishing” while Roger Ebert wrote that “it doesn’t simply make a show of being uncompromising – it is uncompromised in every single shot from beginning to end.” Of Mirren’s performance, he observed, “Mirren’s character transformation is almost frightening – she changes from submissive wife to daring lover to vicious seeker of vengeance. And watch the way she and Howard handle their sex scenes together, using sex not as joy, not as anavenue to love, but as sheer escapism; lust is their avenue to oblivion.”

This is a film unlike anything I have ever seen before – or after. It has so many layers to admire and to disgust, from the set design and change of colors whenever people switch rooms, that you need to see it more than once to fully appreciate the themes and details. It’s what people call “arthouse”, and I can easily understand why people might find it boring, cannot connect to it or think it’s just bloody disgusting. To me it’s first and foremost an actor’s film. Michael Gambon brings to life one of the most crude criminals, inside and out. The way he verbally treats his wife in front of everyone else is as painful to watch as the violence that happens outside the restaurant. There’s Helen Mirren in one of her very best cinematic performances. She bares not only her character’s body, but her soul. None of the nude scenes feel voyeuristic, they are essential to tell the story between the wife and her lover, a vessel to escape their everyday lives. It’s a dangerous performance by Mirren, and a brave one. And such is the film. “The Cook the Thief his Wife and her Lover” may not be for everyone, but you should see it at least once for yourself to believe it. Bon appetit.

The Cook The Thief His Wife and Her Lover is being listed under the following tags: Drama, Experimental, Year 1989
Back to previous page
Advertisment