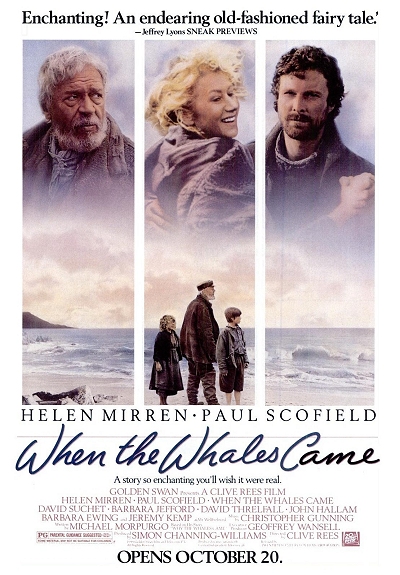 In 1844, a school of Narwhal whales were slaughtered by the islanders of Samson. Soon after the island was destroyed by a terrible curse. 70 years later, two young children (Max Rennie and Helen Pearce) are playing on the beach when they befriend an old and mysterious man (Paul Scofield). Known locally as "The Birdman" he is the sole survivor from Samson and the only one who knows the truth behind the curse. The friendship develops until one day it is put to the ultimate test as a single Narwhal is beached on the island, and the villagers gather to kill it, the unlikely threesome begin a dangerous mission, not only to save the whale, but to save the island itself.
Cast: Helen Mirren (Clemmie Jenkins), Paul Scofield (The Birdman), David Threlfall (Jack Jenkins), Helen Pearce (Gracie Jenkins), Max Rennie (Daniel Pender), David Suchet (Will), Jeremy Kemp (Mr. Wellbeloved), John Hallam (Treve Pender), Barbara Ewing (Mary Pender), Dexter Fletcher (Big Tim), Nicholas Jones (Vicar), Joanna Bartholemew (Miss Tregarthen), Barbara Jefford (Auntie Mildred), Irene Wilson (Molly Woodcock), Fergus Rees (Young Birdman), Kerra Spowart (Margaret Pender) 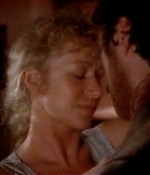 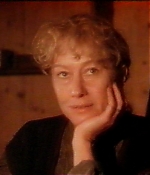 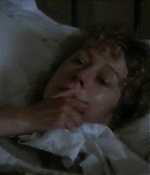 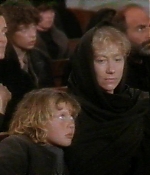 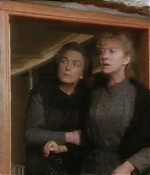 “Why the Whales Came” is a children’s story written by Michael Morpurgo and first published in 1985. Set on the island of Bryher, one of the Isles of Scilly, off the coast of Cornwall, in the year 1914, the story follows Grace and Daniel, two young children, at the beginning of World War I. Grace and Daniel have been warned to stay away from the mad Birdman- but the message in the sand tells them that the Birdman isnât what he seems. Then they get lost in the fog and stranded on Samson Island. Should they believe the Birdmanâs story that the island is cursed? Following the success of the novel, film rights were quickly sold and actors Paul Scofield, Helen Mirren and David Threlfall. Renamed to “When the Whales Came”, the film had a Royal Performance premiere in October 1989, but it didn’t make a big impression at the box office – or with critics. Rober Ebert wrote in his review: “When the Whales Came is a simpleminded movie by filmmakers who have conspired to make a predictable and morose parable and bang us over the head with it.”

“When the Whales Came” aims at a younger audience with a simply story and beautiful landscapes. That’s just about it. Apart from the children and Paul Scofield, all other characters feel like sideshows. This is especially bad if you have David Suchet and Helen Miren on board (literally). It’s one of those films you can watch without much attention and you won’t miss much, because it’s clear how it’s going to end from the get-go. But, not every film can be an epic journey and I’m sure the people who made “When the Whales Came” didn’t have an epic budget either. Therefore, if you like a small film with a positive message, this one’s recommended.

When the Whales Came is being listed under the following tags: Drama, Literary Adaptation, Year 1989
Back to previous page
Advertisment