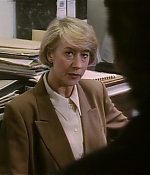 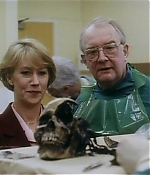 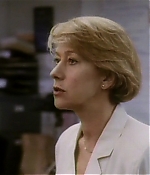 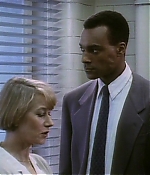 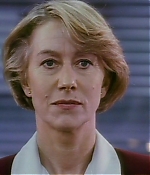 Based on the story by Lynda La Plante, Allan Cubitt wrote the script for Prime Suspect 2: “Obviously, the chance to develop a story at length and present it to such a potentially large audience is a great opportunity for me. The whole process has been a joy from beginning to end and has allowed me to collaborate with the best people around. I can honestly say that the producer, writer, script editor, story editor and director have worked like one person throughout the project and that’s a rare enough thing to be worth celebrating as frequently as possible.” In addition to Helen Mirren as Jane Tennison, the cast includes Colin Salmon in his first television role as Detective Bob Oswalde. Salmon sees Oswalde as a driven man, “one with the insight to crack tough cases. He’s drawn to Tennison because, although both are outsiders, they are also equals. But the qualities which brought them together ignite conflicts.”

In the New York Times (February 11, 1993), John J. O’Connor described the new series as “powerful, every bit a good as the original and in some ways even better… Ms. Mirren has got this grittily independent woman down perfectly.” New York Magazine wrote on February 15, 1993: For adulthood’s paw prints, we can look to Helen Mirren, who returns as Jane Tennison of Scottland Yard in “Prime Suspect 2”. What was remarkable about the first “Prime Suspect” – that a woman neglecting her hearth could still find satisfaction in a job as difficult as she was, as if intellectual acitivity were its own reward for both sexes – remains so in this splendid sequel. John Strickland directs from a script by Alan Cubitt, and Mirren once again is a listening intelligence: Her brain’s an ear. Really, television doesn’t get any better.

A follow-up to a successful series is always difficult because it’s a thin line between repeating what’s worked in the first place and getting detached too far from what worked in the first place. Fortunately, “Prime Suspect 2” hits the core once again. The case is dark and compelling – yet, once again, it feels very real to be happening anywhere. Tennison is more respected by her colleagues this time, yet she has to battle with her superiors, prejudice, and an affair with a DS who’s joining her team. This might distract from the case of the series, but it adds more layers to the complexity of the Tennison character. The second “Prime Suspect” is a triumph for everyone involved. Very recommended.

Prime Suspect 2 is being listed under the following tags: Crime Series, Prime Suspect, Thriller, Year 1992
Back to previous page
Advertisment