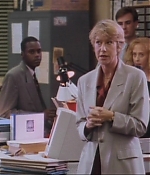 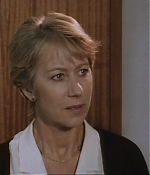 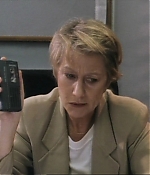 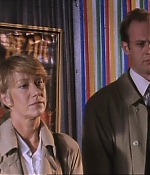 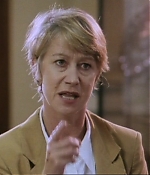 Although Jane Tennison has undoubtedly been good to Helen Mirren, the actress admits to not liking her much at all. “Jane Tennison is like a friend of mine that I know fairly well and get on quite well with,” says Helen, picking her words carefully. “But there are certain things about her I don’t like at all. I don’t like her brutality, I don’t like her extreme selfishness. I don’t like her job and could never be involved in a profession like it. I suppose I’m saying that I’m simply not a policewoman by nature, inclination or ambition. Some things she does meet with my approval though. She walks on men and uses them – which is just what men often do to women. I think women are just as capable… I just reckon they do much more of it than they’ve so far confessed to.”

Helen visited the vice squad at Charing Cross station to research her role for Prime Suspect 3. She admits to finding some of the material in the new story quite shocking. “The really scary thing is, is that it isn’t made up. Much of the content can be found in TV documentaries. We haven’t needed to exaggerate for the sake of drama.” Prime Suspect 3, like 1 and 2, was filmed almost entirely on location in Manchester. But when a certain ‘London’ something was needed it was imported form the capital. Surprisingly, that certain something was ‘girls,’ sophisticated transvestites, who traveled from London to Manchester to add an atmosphere to scenes that could never have been achieved by dressing up extras. Costume designer Mike O’Neill explained: ” We went to London’s best known clubs, Madame JoJo’s and the Kinky Gerlinky evening at Leicester Square’s Equinox club to get ideas of what a transsexual or a transvestite would wear. We talked to many of the girls and based our costumes on what they told us. It isn’t all glitter and glamour; during the day it came down to something as simple as a pair of jeans and a T-shirt! The people we spoke to were a great help and we asked about a dozen of them to appear in Prime Suspect. It would have been very hard to dress up actors and expect them to act in the right way. The performances might have been too awkward or camp.”

Like the proverbial bad penny, Sgt. Otley (played by Tom Bell) has turned up again. In Prime Suspect 1 he was the police rival who made Tennison’s life hell, rattled by the fact that a woman was heading the murder team. Sly and malicious, he set out to cause her downfall but Tennison proved she was tougher – and more intelligent – than he could have imagined. Assigned to work with Tennison again on the Vice Squad, he reluctantly admits that his behavior was out of line before he concedes that she’d done a good job. An uneasy truce is drawn between them. Otley cuts a rather sad figure. “A loner who chooses his own socks,” is how Bell describes him. “He’s probably not got a female influence in his life.” The character of Jimmy Jackson (David Thewlis) is one of La Plante’s blackest – a low life who picks up young children at railway stations, offers them a place to stay then locks them up and rents them out to pedophiles. Tennison is told that Jackson was looking for Connie on the night he was murdered. But when they question him he has an alibi – and witnesses to prove it. “Making the film was been incredibly hard work for several months,” says Thewlis. “I began to be obsessed with the character and got very angry and aggressive like him which is not normally me at all. I wasn’t really sure what I could do to research someone like Jackson… my wife suggested I pull wings off insects or hang around a strange bar near where I live called ‘Brief Encounter.’ But how was I supposed to ‘hang?’ With a sign around my neck saying, ‘I’m only here for research?'”

The third series, which aired on public television in 1994, was perhaps the most disturbing, as it dealt with child prostitution, AIDS, and murder. However, here, as in the previous episodes, the violence was not seen but rather discussed. There was nothing gratuitous about the manner in which the series presented its theme. The critics were again fulsome in their praise. In Esquire (August 1994), David Denby wrote, “As Detective Chief Inspector Jane Tennison… Mirren has brough off the most sustained example of great acting in the history of televsion. Mirren remains naked throughout Prime Suspect without removing a single garment. No matter how many squalid crises are forming, no matter how many people are fighting for her attention, Mirren always has a private moment with the camera, a moment in which we see, beneath the harrassed, brisk manner, exactly what she’s thinking and feeling. She sets the emotional and moral values. And we accept what we learn from her because she’s always a three-dimensional person, hurt and hurting, strong yet easily angered. Maturity has never looked so ripe, so sexual – and so intellectually focused at the same time. Mirren has ended, for the time being, the tedious, pointless distinction between mind and body. She’s put a whole woman on the screen and made people grateful just for her existence.

Helen Mirren won her third consecutive BAFTA Award as Best Actress, while the series won its second consecutive Emmy Award as Outstanding Miniseries -for which it also received a BAFTA in the same category.

Taking on where the second “Prime Suspect” has transferred to a new Vice Squad in Soho, which means a new cast for the show’s third installment. While the previous team made a big part of the first two series’ feel, the new team feels like a bit of fresh air – which sounds a bit sarcastic in relation to all the rotten themes and people that Tennison is dealing with in series 3. And at least, Bill Otley is back. The third “Prime Suspect” is as gritty and brilliantly executed as its predecessors, with a very dark story, a bleak look at detective work and wonderful supporting players. This time, the prime suspect isn’t so obvious from the get-go, so you have elements of a whodunnit thrown in as well. The one word that fails to describe “Prime Suspect” is entertainment, because of its subject matters, but it’s still as good as TV drama can get. Very recommended.

Prime Suspect 3 is being listed under the following tags: Crime Series, Prime Suspect, Thriller, Year 1993
Back to previous page
Advertisment