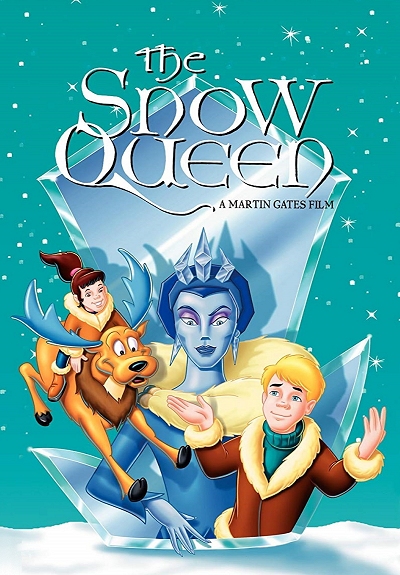 Ellie and her brother Tom listen to their grandmother reading them a story about the evil Snow Queen (voiced by Helen Mirren). When their younger sister Polly asks if the is coming, Tom says that she only exists in the story. However, the Queen really does live in an icy palace in the North Pole with her three troll servants: Eric, Baggy, and Wardrobe. Her plan is to set up her huge magic mirror on a mountain to reflect the sunlight away so the entire world will become her kingdom, but the mirror falls down the mountain and shatters into pieces. Two of its pieces hit Tom in the eye and the heart and he falls under a curse.
Cast: Helen Mirren (Snow Queen), Ellie Beaven (Ellie), David Jason (Eric), Hugh Laurie (Peeps), Rik Mayall (Robber King), Julia McKenzie (The Old Lady, Freda), Imelda Staunton (Ivy, Angorra), Damian Hunt (Tom), Sylphide Strallen (Polly), Russell Floyd (Wardrobe), Colin Marsh (Baggy), Richard Tate (Les), Rowan D'Albert (Prince), Scarlett Strallen (Princess), Gary Martin (Dimly)

Loosely based (very loosely) on Hans Christian Andersen’s classic fairy tale, “The Snow Queen” has been in production since 1991, but was completed only in 1995. This was in part due to the legal problems in the Philippines. Both it and its sequel were separately released on the DVD by Universal/Right Entertainment in 2003, and then together as a double-pack in 2005. Previously, the two films were also released on the VHS by Warner Bros. It was also later made available through Netflix. In his book “The Enchanted Screen: The Unknown History of Fairy-Tale Films”, Jack Zipes called it “highly comic [and] neatly drawn,” praising the “numerous changes that liven the action and transform the plot in unusual ways.” He wrote “there’s nothing glitzy in this animated film and yet it sparkles with an unusual approach to a humourless tale.”

The Snow Queen is being listed under the following tags: Animation, Fairy Tale, Year 1995
Back to previous page
Advertisment