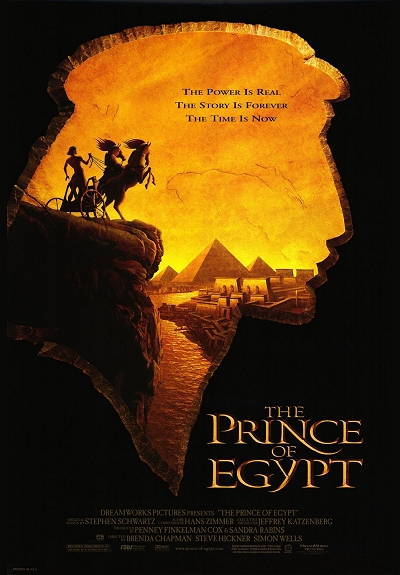 This is the extraordinary tale of two brothers named Rameses (voiced by Ralph Fiennes) and Moses (voiced by Val Kilmer), one born of royal blood, and one an orphan with a secret past. Growing up the best of friends, they share a strong bond of free-spirited youth and good-natured rivalry. But the truth will ultimately set them at odds, as one becomes the ruler of the most powerful empire on Earth, and the other the chosen leader of his people. Their final confrontation will forever change their lives and the world. Featuring an all-star voice ensemble including Michelle Pfeiffer, Sandra Bullock and Helen Mirren. v
Cast: Val Kilmer (Moses, God), Ralph Fiennes (Rameses), Michelle Pfeiffer (Tzipporah), Sandra Bullock (Miriam), Jeff Goldblum (Aaron), Danny Glover (Jethro), Patrick Stewart (Seti), Helen Mirren (The Queen), Steve Martin (Hotep), Martin Short (Huy), Bobby Motown (Rameses Son), Eden Riegel (Young Miriam), Ofra Haza (Yocheved)
The Prince of Egypt is being listed under the following tags: For Children, Queens, Year 1998
Back to previous page
Advertisment