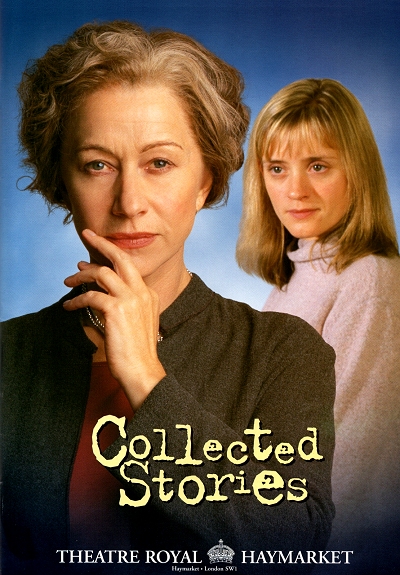 Short-story writer Ruth Steiner (Helen Mirren) is confronted with her student turned competitor Lisa (Anne-Marie Duff). What is new here is that the women are teacher and student both in academia and in life, that they come from different social milieus, and that for her first novel, Lisa has also cannibalized Ruth's experiences, to wit her youthful, shattering affair with the poet Delmore Schwartz. The women deal with the moral dilemma of whether a person's life events are suitable for another to use in their own creative process.
Cast: Helen Mirren (Ruth Steiner), Anne-Marie Duff (Lisa Morrison) 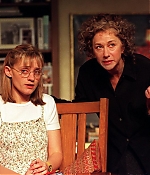 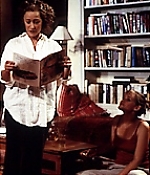 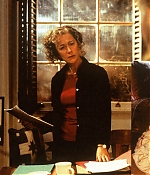 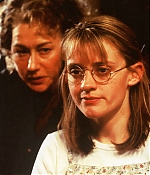 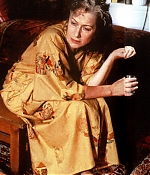 Helen Mirren has had mixed fortunes on the London stage during the 1990s. She was sensational in “A Month in the Country”, but even most loyal theatregoers shudder at the memory of the witless farce “Sex Please, We’re Italian”, while her long overdue return to Shakespeare in “Antony and Cleopatra” was ruined by a dud production and Alan Rickman’s weirdly disengaged performance as her lover. So, as the Telegraph wrote in its review, “it is good to report that Mirren is back in a show that gives scope for her talent to shine. Collected Stories isn’t quite as wonderful as its American author, Donald Margulies, makes it sound in his hilariously self-satisfied programme note, but it is an involving, intelligent and at times touching drama. Like David Mamet’s Oleanna, and Willy Russell’s Educating Rita, this is a two-hander that explores the relationship between teacher and pupil. And, like those earlier plays, it memorably shows how the balance of power shifts between age and youth, experience and apparent innocence.”

Mirren plays Ruth Steiner, a successful Jewish short-story writer in her fifties who also teaches a postgraduate creative-writing course. A new pupil arrives at Ruth’s book-lined Greenwich Village apartment, 26-year-old Lisa Morrison (Anne-Marie Duff), a gauche gawd-‘elp-us who is positively dripping with sycophantic adoration of her famous teacher. Mirren splendidly captures the exasperation and growing affection with which the brisk yet lonely older woman treats her new charge, and it is fascinating to watch the relationship develop in a series of six scenes spanning six years. From the start, Duff, an actress of exceptional promise, shows that there is more than a hint of passive aggression in Lisa’s devoted subservience. Gradually she begins to blossom, and her mentor feels stirrings of envy.

Lisa encourages Ruth to tell her the story of her great love affair, with the boozy, burnt-out American poet Delmore Schwartz, back in the Fifties. It’s here that Mirren reminds you of just what a glorious actress she can be. She seems to glow from within as she describes that youthful ardour, looking back to her “shining moment” with a catch in her voice and a palpable sense of regret that provides the play’s emotional heart. It’s here that I would normally start adopting the conventions of thriller-reviewing and refuse to give away what happens next. Margulies, however, has blown the gaff himself, so I feel free to reveal that Lisa turns Ruth’s doomed affair into the material of her first novel, setting up a humdinger of a row between the two women in the last act.

The Telegraph concludes: “Collected Stories makes for absorbing theatre, and Howard Davies’s production poignantly charts the ravages of time and illness. Mirren’s movement from bossy assurance to pained vulnerability is beautifully caught, while Duff chillingly captures the bland-faced arrogance of youth and the ruthless magpie-like amorality of the writer who will seize on material wherever it may lie. Unfortunately the play is a touch predictable and pat. The debate about artistic influence and literary theft never takes you by surprise, and too much of the dialogue is merely workman-like. Only in Mirren’s marvellous moment of recollected love, and in her bitter desolation at the end, does the play really take flight”.