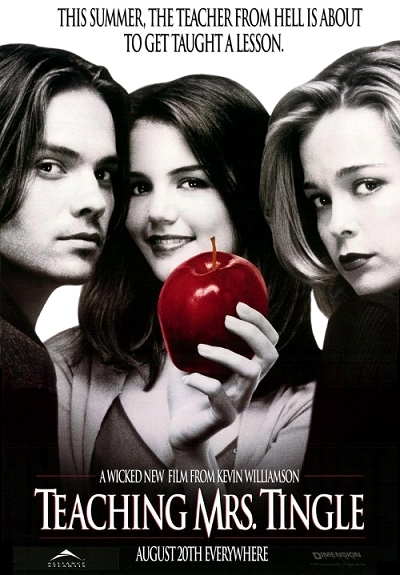 All that Leigh Ann Watson (Katie Holmes) needs is an âAâ in history. Thereâs just one problem: Mrs. Tingle (Helen Mirren), the history teacher who for 20 years has terrorized the students of Grandsboro High. When Leigh Ann is accidentally accused of cheating and her graduation is in jeopardy, she and her two friends Luke (Barry Watson) and Jo Lynn (Marisa Coughlan) have to prove her innocence and find their way out of an impossible situation. Things get out of hands when Mrs. Tingle is knocked out unconscious during an argument and finds herself tired up to her bed by the three students.
Cast: Helen Mirren (Mrs. Tingle), Katie Holmes (Leigh Ann Watson), Jeffrey Tambor (Coach Wenchell), Barry Watson (Luke Churner), Marisa Coughlan (Jo Lynn Jordan), Liz Stauber (Trudie Tucker), Michael McKean (Principal Potter), Molly Ringwald (Miss Banks), Vivica A. Fox (Miss Gold), John Patrick White (Brian Berry), Robert Gant (Professor), Harvey Silver (Roger) 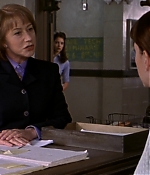 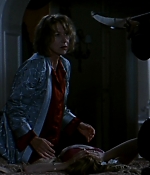 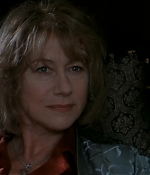 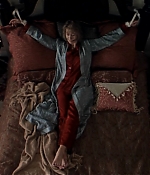 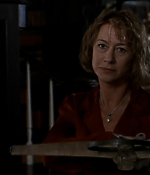 Like every person who has ever attended school, Kevin Williamson had a Mrs. Tingle lurking in his past, a nefarious woman who threatened to ruin what should have been his happy-go-lucky teenage years. Her memory haunted him long after graduation. “She had it out for me from day one,” Williamson recalls. “She knew that I wanted to be a writer, that I wanted to be a storyteller, and she did everything she could to cripple that. Our final assignment was to write a short story and she stopped me halfway through my reading it to the class and said: ‘That’s disgusting. Your voice shouldn’t be heard. Give up any hope of being a writer.’ I believed her for ten years.” Ironically, after that decade of inexpression, Williamson took a screenwriting class at UCLA and was inspired to get his revenge – writing with comic abandon an irreverent tale about a brilliant young valedictorian-to-be caught up in out-of-control events when she is forced to fight for the honors she deserves. Williamson says: “Ultimately, I was grateful for my own Mrs. Tingle. It’s funny that criticism can at first paralyze you and then it can fuel you”. Soon Williamson’s career was taking off, with the devilishly clever teen thrillers “Scream”, “Scream 2” and “I Know What You Did Last Summer”. He also created the hit television series “Dawson’s Creek”. But throughout his success, Mrs. Tingle kept beckoning. “It was my first screenplay and I was so close to it because it came from my own experience. It was my most passionate and autobiographical script, the first thing that really opened me up. Since I was looking for my first chance to direct, it made sense for me to come back to Mrs. Tingle,” he explains.

To play Eve Tingle in all her spiteful glory. Williamson chose Helen Mirren -in part because she seemed so unlikely for the role. Mirren was totally unexpected as a contemporary symbol of educational evil. Says Mirren: “This is not the sort of film that I’m usually associated with so I was thrilled that Kevin would think of me for this role.” Impressed with Williamson’s mix of comedy, thrills and psychological savvy in the script, Mirren saw the story of Mrs. Tingle as being about the most frightening and very real adolescent rite of passage: facing the future. “For me “Teaching Mrs. Tingle” addresses teenagers’ insecurities, ambitions and fears about the future,” she explains. “Remembering back to the ages of Leigh Ann, Luke and Jo Lynn, fear of the future is the most powerful thing driving you on. You don’t know what’s going to happen to you and it’s terrifying. I think adults forget how scary that is. But Mrs. Tingle hasn’t forgotten how scary it is; on the contrary, she uses that fear to her own slick advantage when the stakes become higher, manipulating Leigh Ann, Luke and Jo Lynn with savage aplomb. “I think Helen Mirren is one of the greatest living actresses that we have,” says Williamson, “and the fact that she wanted to play this role was amazing. She elevated Mrs. Tingle to a new level.”

The film was originally to be called “Killing Mrs. Tingle”. The events on 20 April 1999 at Columbine High School (Littleton, Colorado, USA) in which 13 people were murdered by two of their own classmates, prompted the name change. “Teaching Mrs. Tingle” was released on August 20 to mostly negative reviews. Roger Ebert wrote, “Helen Mirren is a very good actress. All too good for “Teaching Mrs. Tingle,” where she creates a character so hateful and venomous that the same energy, more usefully directed, could have generated a great Lady Macbeth. She is correct to believe that comic characters are best when played straight. They depend on the situation to make them funny. There is nothing funny about the situation in “Teaching Mrs. Tingle.”

As mentioned above, the premise of “Teaching Mrs. Tingle” is familiar to everyone who has ever attended school. Therefore, the film has the great fortune to appeal to anybody, it might seem. Unfortunately, it falls flat right after its start. The tragic events in Littleton have surely had their impact on the idea of taking revenge on your teacher. What could be a dark comedy feels oddly outdated by reality, and although it’s clear that nothing bad will happen to Mrs. Tingle, the entertainment factor is impossible to unravel. The film’s weakness is that it’s too well-behaved for such a dark theme. There’s Katie Holmes is a goody two shoes, Marisa Coughlin as her hyperactive friend and Barry Watson as the harmless bad boy between them. Their characters become so appalling throughout the story, that Mrs. Tingle ends up being the only reasonable character in the whole lot. If the world’s worst teacher turns out to be the film’s only saving grace, something’s gone wrong. Recommended to everyone who’s ever wished there was a thriller version of “Dawson’s Creek”.

Teaching Mrs. Tingle is being listed under the following tags: Comedy, Thriller, Year 1999
Back to previous page
Advertisment