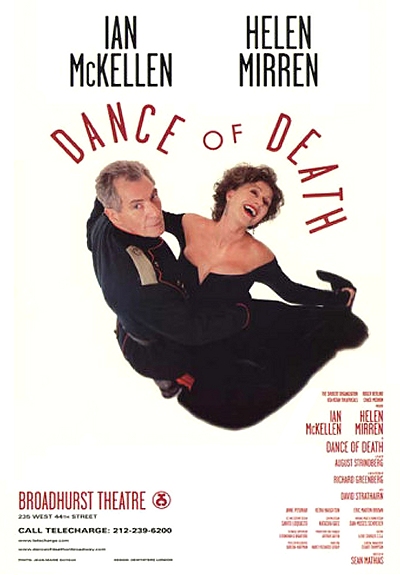 Trapped within a tower-prison, on an island at the edge of the world, captain Edgar (Ian McKellen) and his wife Alice (Helen Mirren), a former actress, experience their own private hell, just before their silver wedding anniversary. Their only glimpse of the world outside is Kurt (David Strathairn), an old friend of Edgar's and Alice's cousin, who comes to visit them three months before they celebrate their 25th anniversary of marital life. But none can help each other, they don't want that, either. The plot unreels over the course three days.
Cast: Ian McKellen (Edgar), Helen Mirren (Alice), David Strathairn (Kurt), Anne Pitoniak (Old Woman), Keira Naughton (Jenny), Eric Martin Brown (Sentry) 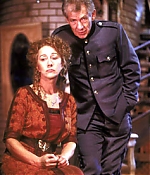 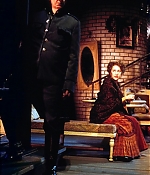 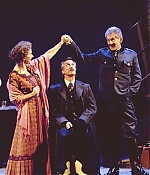 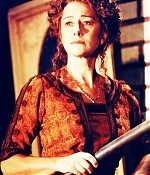 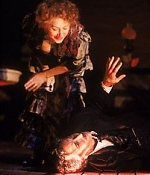 August Strindberg is credited with being the father of psychological drama. His 1901 play “Dance of Death” makes us think that he might well have also been its mother. After all, this is an equal opportunity plunge into the holy shackles of matrimony. If you think George and Martha had it bad in Who’s Afraid of Virginia Woolf, you ain’t seen nothin’ yet. Dance of Death horrifically captures the love/hate aspects of marriage in all its grotesque minutiae. This poison-covered play would be too toxic to see if it didn’t feature actors you simply have to see. Ian McKellen and Helen Mirren star as the moon-crossed lovers who are about to celebrate their 25th anniversary. These two actors put so much life into their roles that they almost turn this bleak play into a comedy about despair – but not quite. Like a DNA molecule, the husband and wife they play are bound to each other in a complicated double helix. The actors bring their considerable talents to a new, accessible adaptation of the play by Richard Greenberg. Add the darkly comic directorial touch provided by Sean Mathias and this Dance of Dance becomes a stark yet ultimately mesmerizing exploration of a truly scabrous relationship.

As Variety writes in his review, “the performances of McKellen and Mirren are likewise tensely pitched: They pounce on the textâs acrid humor and its noxious savageness almost instantly. The delight with which the playâs two tortured souls insult and provoke each other is the source of the playâs scalding comedy, and it has been seized upon as the most viable means of securing the audienceâs engagement with a difficult text (a tactic also taken, less justifiably, by Broadwayâs concurrent âHedda Gablerâ). For a while, the thrust and parry of their interaction has a macabre fascination: McKellen and Mirren are performers of considerable natural wit, and as they taunt and torment each other, the acidic flavor of Strindbergâs mordant humor stings pleasurably.” The New Yorker wrote, “McKellen and Mirren magnificently turn Strindberg’s fiction into life, and McKellen, in his deep embrace of the role, takes it one step further, showing performance itself to be a powerful life force. As a presence onstage, he is the sound of two hands clapping.”

Given the play’s title and its caustic subject matter, many wondered whether “Dance of Death” would survive the rocky economic days which befell Broadway following the September 11 attack on the World Trade Center. However, the drama, no doubt bolstered by the star power of its two leading players, has regularly posted robust numbers. For the week ending September 30, the Strindberg boast 92.3 percent of its seats filled. No straight play did better.
Awards and Nominations for Helen Mirren

Dance of Death is being listed under the following tags: August Strindberg, Broadway, Year 2001
Back to previous page
Advertisment