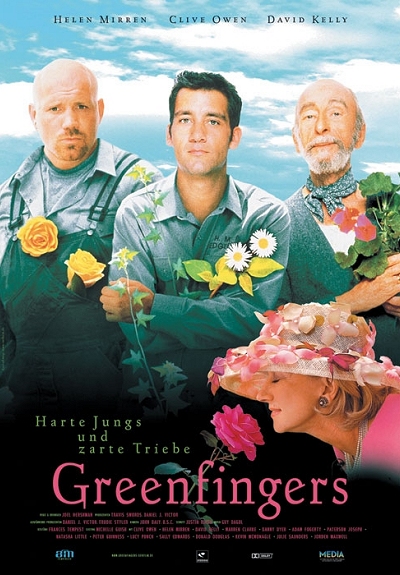 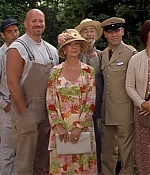 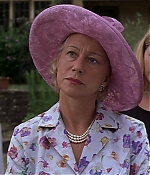 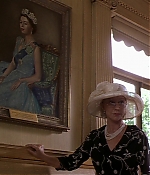 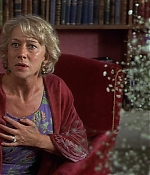 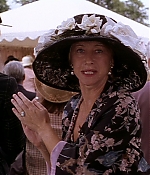 1997 saw a movement in British cinema with the release of “The Full Monty”, a low-budget comedy that earned $250 million at the box office. Many British comedies in the following years cut in the same vein and succeeded with international praise for “Waking Ned Devine”, “Billy Elliot” or “Saving Grace”. The themes of these films all feel similiar – working class or underprivileged people striving for a higher aim. In this, “Greenfingers” makes no exception. The comedy, written and directed by Joel Hershman, is loosely based on true events. In 1998, inmates of Her Majesty’s Prison Leyhill in the Cotswolds won their second gold medal at the Hampton Court Palace Flower Show. Their show garden, “Take a Walk on the Wild Side,” included a woodland garden of wildflowers and grasses under linden and beech trees, with a stream flowing under a stone bridge. Their win was chronicled in a New York Times article by Paula Deitz, which sparked Hershman’s interest. He developed the script, although only loosely basing it on the actual events, to shape a feel-good romantic comedy. On the verge of his transition to Hollywood, Clive Owen was cast in the lead role of Colin, who’s sentenced for the murder of his brother. Helen Mirren, cast as the posh garden expert Georgina Woodhouse, was pleased to play a comedic flamboyant character:

I was very happy to be in a comedy, because I haven’t had the chance of playing much comedy on film. She’s rather over-the-top. That was kind of fun after the very repressed, internal kind of role like Jane Tennison. My character is absolutely not based on anyone in real life at all. There’s no one quite so flamboyant as the character that I’m playing. But I took little elements from friends that I know who are very into gardening themselves.

After its world-premiere at the 2000 Toronto International Film Festival, “Greenfingers” was released theatrically in the USA in June 2001 and in the United Kingdom in September 2001. It opened to rather lukewarm reviews. The New York Times – whose article was the ignition for the film’s script – found the film “as synthetic as a rubber rose, but it is all but indistinguishable from the organically grown, bred-in-Britain article” The BBC wrote, that “while Owen’s trademark detached cynicism and cool is wasted here, Mirren’s posh gardener is enjoyably hammy and David Kelly’s ailing jailbird is poignantly dignified. Lacking the crowd-pleasing verve or power of Brit-hit “The Full Monty”, it’s unlikely that “Greenfingers” will set the big-screen on fire, but it’s certainly likely to bring a warm glow to a lazy afternoon’s TV viewing”. Concerning the critics, Owen and Mirren fared better with their second film collaboration of 2001 – Robert Altman’s “Gosford Park”.

âââââ
I was surprised while reading critics reviews for “Greenfingers” how poorly received it has been upon its release. Sure, there have been quite a few British comedies in that time that followed the same route and have been more or less successful by doing so. The actual events it is based on sound a bit far-fetched and the film’s characterisations of the criminal inmates make you think they’ve ended up in prison by unfortunate events since they’re all such nice guys. Still, “Greenfingers” is no documentary and I found it to be a charming comedy worthwhile its time. The film’s win is its cast. Clive Owen leads a talented group of supporting playes, who play their characters with comic timing. And Helen Mirren’s performance is a fine departure from her serious roles. If you’ve enjoyed the likes of “Saving Grace” or “Calendar Girls” (another depature for Helen into comedy) you will enjoy “Greenfingers” as well.

Greenfingers is being listed under the following tags: Comedy, Romance, Year 2001
Back to previous page
Advertisment