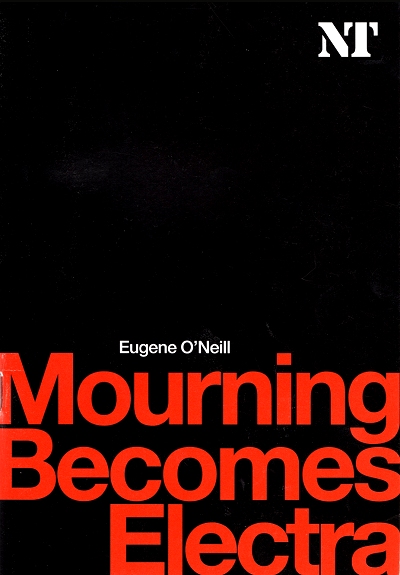 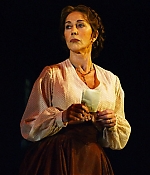 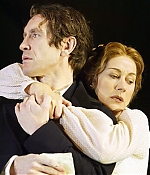 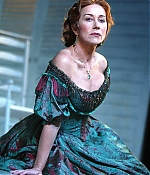 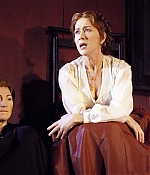 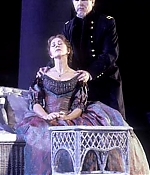 It is easy to mock Eugene O’Neill’s four-and-a-half-hour 1931 drama – “a tabloid Oresteia in a stereotyped Puritan setting”, according to American critic Robert Brustein. Set in the Mannon’s New England mansion at the end of the civil war, the play mixes Greek myth, American history and Freudian psychology. We watch with appalled foreknowledge as Ezra Mannon returns from battle only to be poisoned by his adulterous wife, Christine, and avenged by his daughter Lavinia and flakily neurotic son, Orin. You could accuse O’Neill of hitching a lift on the back of Greek tragedy. What he actually does is use a classic archetype to explore the link between doomed individuals and a decaying society. The point is brilliantly grasped in Bob Crowley’s design, which offers a side-on view of a porticoed verandah with rotting pillars and a peeling ceiling inscribed with the Union flag. It is a world of antique privilege about to be replaced by a thrusting business ethic. When Tim Piggott-Smith’s excellent, anxiety-ridden Ezra speaks of his Puritan upbringing, in which “being born was starting to die”, he is not merely paraphrasing Freud but articulating O’Neill’s main theme: the way a death-ridden culture contaminates individuals and destroys families.

Davies’s production conveys this human cost through a set of superlative performances. Eve Best’s Lavinia is astonishing, a passionate Puritan so steeped in repression that even when she tells her mother that she hates her, she slumps disconsolately against a wall. Her constant battle between discipline and instinct is beautifully caught in a directorial invention when she furtively kisses the lips of her mother’s murdered lover. Helen Mirren rescues the adulterous Christine from melodrama by playing the character from her own point of view. For all her sumptuous sensuality and waspish irony, she is never better than when silently listening to Ezra’s analysis of their loveless marriage while maintaining a mask of polite affection. And Paul Hilton lends the incestuous Orin a Dostoyevskian sense of emotional frenzy. But the triumph of the production is that, echoing O’Neill, it sees these damaged individuals as tragic products of a guilt-haunted Calvinist culture.

The praise for Mirren continues, as Curtain Up writes, “Mirren is magnificent whether battling with her unloved and unlovely daughter or with her husband. We see her desperately trying to wash her vulva after her husband returns and forces her to have intercourse, a scene which sums up more than anything else the misery of a dysfunctional marriage. As she lies about her lover, she pauses momentarily and looks askance at the audience, taking a second to compose her untruth. I especially liked the scenes when she tries to win over her returning son, to undo what Lavinia has told Orin”. BBC wrote, “Dame Helen is on superb form as the New England matriarch who murders her husband in league with her younger lover. But her performance is matched by that of relative newcomer Eve Best as the vengeful daughter who exacts bloody retribution.”

Mourning Becomes Electra is being listed under the following tags: Eugene O'Neill, The Royal National Theatre, Year 2003
Back to previous page
Advertisment