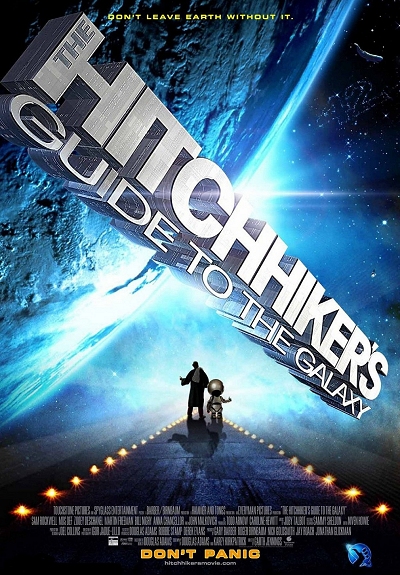 Everyone has bad mornings. You wake up late, you stub your toe, you burn the toast...but for a man named Arthur Dent (Martin Freeman), this goes far beyond a bad day. When he learns that a friend of his is actually an alien with advanced knowledge of Earth's impending destruction, he is transported off the Earth seconds before it is exploded to make way for a new hyperspace motorway. And as if that's not enough, throw in being wanted by the police, Earth II, an insane electronic encyclopedia, no tea whatsoever, a chronically depressed robot and the search for the meaning of life, and you've got the greatest adventure off Earth.
Cast: Martin Freeman (Arthur Dent), Sam Rockwell (Zaphod Beeblebrox), Zooey Deschanel (Trillian), Bill Bailey (The Whale), Anna Chancellor (Questular Rontok), Warwick Davis (Marvin), Mos Def (Ford Prefect), Su Elliot (Pub Customer), Stephen Fry (Narrator, The Guide), Richard Griffiths (Jeltz), Dominique Jackson (Fook), Simon Jones (Ghostly Image), Thomas Lennon (Eddie the Computer), Mark Longhurst (Bulldozer Driver), Kelly Macdonald (Reporter), John Malkovich (Humma Kavula), Ian McNeice (Kwaltz), Helen Mirren (Deep Thought), Bill Nighy (Slartibartfast), Steve Pemberton (Mr. Prosser), Alan Rickman (Marvin), Jack Stanley (Lunkwill)
The Hitchhiker’s Guide to the Galaxy is being listed under the following tags: Comedy, Comics Adaptation, Year 2005
Back to previous page
Advertisment