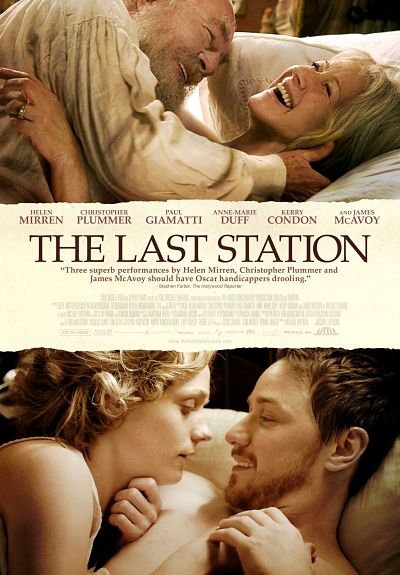 In 1910, the last year of the life of Leo Tolstoy (Christopher Plummer), his disciples, led by Vladimir Chertkov (Paul Giamatti), manoeuvre against his wife, Sofya (Helen Mirren), for control over Tolstoy's works after his death. Tolstoy and Sofya have a long, loving marriage, but his idealistic and spiritual side is at odds with her more aristocratic and conventionally religious views. Contention focuses on a new will that the "Tolstoians" are attempting to persuade him to sign. It would place all of his copyrights into the public domain, supposedly leaving his family without adequate support.
Cast: Christopher Plummer (Leo Tolstoy), Helen Mirren (Sofya Tolstoy), James McAvoy (Valentin Bulgakov), Paul Giamatti (Vladimir Chertkov), Anne-Marie Duff (Sasha Tolstoy), John Sessions (Dushan), Patrick Kennedy (Sergeyenko), Kerry Condon (Masha), Tomas Spencer (Andrey), Christian Gaul (Ivan), Wolfgang HÃ¤ntsch (Priest) 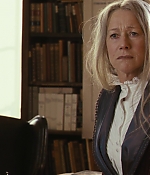 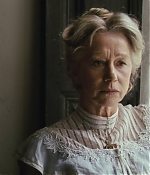 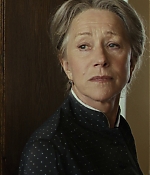 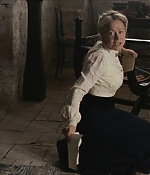 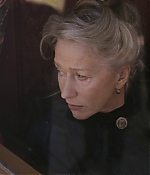 Written and directed by Michael Hoffman (A Midsummer Nightâs Dream, One Fine Day, Soapdish, Restoration), The Last Station recounts the drama of the final year in the life of the great Russian writer, Leo Tolstoy. The movie focuses on two contrasting love stories – the extraordinary relationship between Tolstoy and his wife of 48 years, the immensely impassioned Sofya, and the burgeoning love between Valentin, Tolstoyâs idealistic young private secretary, and Masha, a teacher equally committed to the writerâs values. At the same time, the film shows that Sofya is engaged in a ferocious battle for her husbandâs soul. She believes that Tolstoyâs wealth should be left to the family. She is fighting tooth and nail against Chertkov, the zealous keeper of the Tolstoyan flame, who is adamant that the writersâ fortune should be bequeathed to the Russian people. All these elements come together in a gripping climax as Tolstoy nears the end of his life at a remote little railway station in the Russian countryside.

Filmed at stunning locations in the German regions of Saxony-Anhalt, Brandenburg, Thuringia and Leipzig, the film is adapted from the best-selling novel by Jay Parini, who drew on the diary entries of Tolstoyâs closest relatives and friends. Descendants of Tolstoy have acted as advisers throughout the production. Michael Hoffman begins by saying that, âThe Last Station gives us a very unusual opportunity to go beyond the standard biopic, in order to create a vivid, moving picture about the difficulty of living with love and the impossibility of living without it. Itâs not a film about Tolstoy. Itâs a film about the challenges of love.â The director continues, âitâs a great story about relationships and a wonderful juxtaposition of old love and new love. The core of the movie is this great battle between idealism and reality. All of us start life with an ideal of what love should be, which contrasts sharply with what it turns out to be like in reality. That contrast is compelling. âWe follow Valentinâs progression in The Last Station from a boy who is infatuated with the ideal of fleshless, spiritual love to a man who gradually realizes that all we can hope for is the messiness of love in the real world.â

That dichotomy is reflected in Tolstoy himself, Michael muses. âHe is seen as a living saint and a prophet of perfect love. Yet at the same time, he endures the most tricky marriage and in his private life is haunted by the difficulty of love as it manifests itself in the world. He is revered as the ultimate authority on love, but he canât sort it out in his own living room and bedroom. That conflict is fascinating.â Producer Chris Curling takes up the theme. âThe Last Station is the story of two love affairs. Tolstoy and Sofya are an old couple who have obviously had the most incredible life together. They have been working partners and had thirteen children together. And yet theyâve got to a stage where their politics are so different that despite the magnetic attraction between them, they canât live with each other. âItâs intensely moving to watch their love through the eyes of Valentin, who is himself falling in love for the first time and realizing there is more to life than idealism and politics. He comes to see that the only way you can make love work is by entering into it whole-heartedly. He is witnessing the perils of relationships played out by Tolstoy and Sofya, and through him we can feel their pain. Itâs about the often highly emotional waxing and waning of love.â

The Last Station has many riveting things to say about politics. Phil Robertson reckons that, âone of the great themes of the film is the contradiction of a blue-blooded count who wrote this great socialist manifesto. The two donât necessarily go hand in hand, and that was Tolstoyâs epic struggle. It makes for terrific drama.â The film is equally strong on the theme of sexual politics. Bonnie Arnold asserts that the ideas in The Last Station are very modern. âIn public, Tolstoy was revered. He was the first celebrity, the âBrangelinaâ of his day, and yet one on one, Tolstoy and Soyfa were absolute equals. She never let his fame and his career get in the way of their relationship. She said, âyouâre not only a writer â youâre a husband and father, too.â At that time, that was darn bold of her. Like Hillary Clinton or Margaret Thatcher, Sofya could certainly hold her own! She was a pretty amazing woman, and I really admire her for that.â The producers were delighted by the experience of shooting in Germany. The German countryside also possessed exactly the right Middle European sense of authenticity.

Helen Mirren won the Best Actress award at the 2009 Rome International Film Festival for her performance. She was also nominated for Best Actress at the 67th Golden Globe Awards, as was Plummer for Best Supporting Actor in a Motion Picture. Both actors also received nominations for their performances for the Academy Awards and the Screen Actors Guild Awards.

“The Last Station” was not as masterful as I expected the film to be, but it works as an actors film. It helps to know who Tolstoi is, since this is not a biopic in the traditional sense. As it has become fashionable for biopics, it only decepts a specia time period in the person’s life – in this case, Tolstoi’s last time period. While I found the Valentin storyline less interesting and distracting from the interesting parts of the film, I wished there was more Tolstoi and less of his bickering wife. Not knowing too much about the real Sofia Tolstoi, this is one of the few instances in which I found Helen Mirren over the top in a movie role. She has played snappy characters before, and she has been good at it (State of Play, anytime), but Sofia is on the verge of getting on your nerves. In this case, less is more. I would have prefered more Tolstoi and less tantrum. Putting the wife of a famous person in focus instead of the legend worked better in “Hitchcock” than it did here. But for the actors, it has works nevertheless, winning both Mirren and Plummer Academy Award nomination, although I’m still in disbelief why Plummer was nominated in the Supporting category and Mirren in the lead – which, in the end, doesn’t change a bit. I think “The Last Station” could have been a bit shorter and a bit better, but it was still worth its time.

The Last Station is being listed under the following tags: Biopic, Drama, Real-Life Characters, Year 2009
Back to previous page
Advertisment